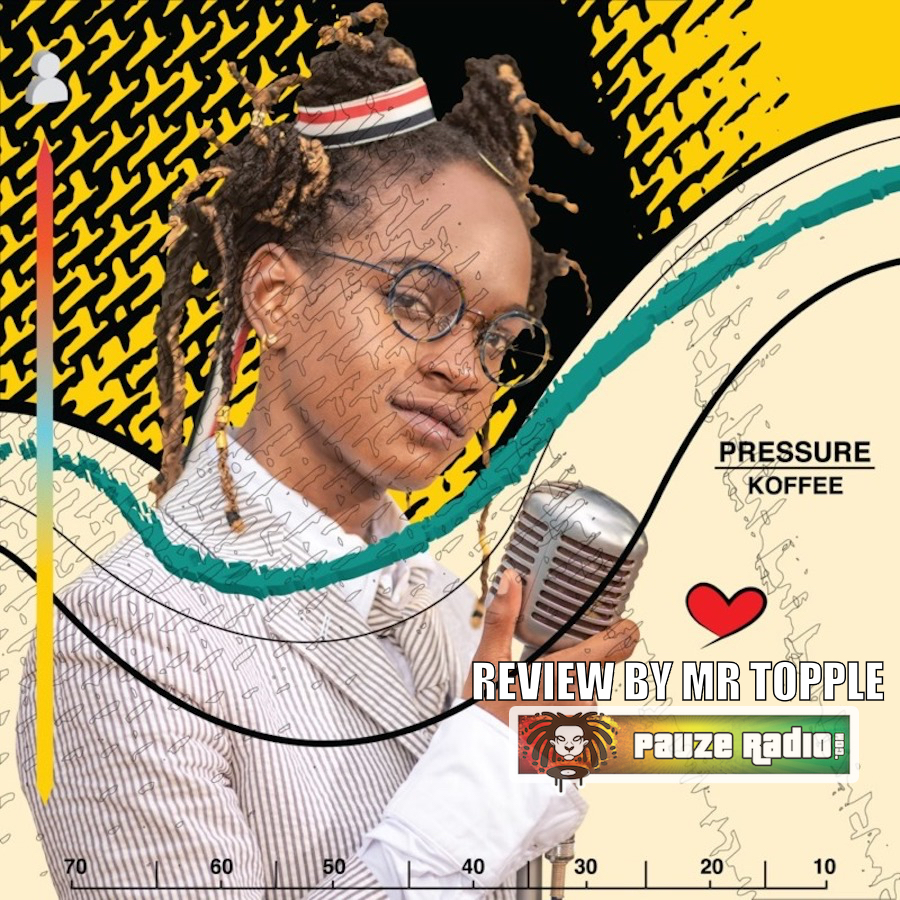 After her Grammy success in 2019 with the EP Rapture, Koffee has been steadily releasing output in 2020 – showcasing her pushing the musical boundaries further. Now, she’s back with another storming cut. But it’s been in the making for several years.

Koffee Pressure, released via Columbia Records/Sony Music Entertainment, sees Koffee team up with producer Ryan Bailey. The track isn’t new, as such – as she has performed it live several times in the past few years. But it’s certainly been worth the wait. Bailey’s production is sumptuous, slick and glossy – and infinitely intricate while also being classic.

After an ostensibly Funky Soul opening, complete with sweeping chords, a multitude of whining guitars and a nicely glissando’ing chime, Pressure kicks straight off into its driving, complex sound. There are elements of the track which serve as rudimentary Roots devices, but with twists. For example, the bass is classic in its melodic formation, working around the root triad of each progressing chord. It’s heavily syncopated too – running dotted rhythms. But unlike may Roots/Dub arrangements, it refuses to drop a beat – keeping a persistent ‘pressure’ on the track’s BPM – pushing it forward. The picked technique used is lovely, giving a slight snap just after each note.

Drums do a winding one drop, with the snare and kick focusing on the two and four – while the hi-hats also avoid directly hitting the one, working instead of dotted rhythms across the rest of the bar. This veritable ‘breath’ leaves sufficient space for the bass to lead the beat, and also gives Koffee a clear start to the bar, on which to bounce her singjay and vocal off.

What’s interesting (and refreshing) about Pressure is that Bailey avoids the standard use of a piano on a bubble rhythm – leaving it in a slightly secondary role, occasionally riffing just out of earshot. Instead, he pushes the guitars to the fore. They do a prominent skank, which thanks to Bailey’s detailed production, is either just audible in the background across the complex instrumentational layering during the chorus, or (like the second verse) is right at the fore. But that’s just one of the guitar lines. On another, the mid and treble on the amp has been wound right up, with a seeming use of a wah-wah pedal, too – as the sound is whining, grating and pure Funk. They riff across chromatic notes, with heavy use of bending and are a joy to listen to.

Complimenting them perfectly is a melodica. Its range focuses across both the lower treble and bass clefs, as it rasps around the track running a repeated motif during the chorus, not dissimilar to the bass’s rhythm, and then breaks out into soaring improv during the verses. It’s highly Funky, again like the guitars, using plenty of chromatic notes and becomes almost a second vocal line at points. Then, just when you think Bailey couldn’t fit anything else in, an electric organ also appears in play – serving a dual role of vibrato chords on the verses and running riffs on the chorus. Backing vocals finish of the arrangement of Pressure perfectly: heavily layered in their harmonies, they flit between call and response duties, straight mimicking of Koffee’s main line and some nice, Doo Wop-esque vowel-led notes.

The genius of Bailey is three-fold and juxtaposed. Not only has he created a highly complex sound, full of extreme attention to detail and technique – but he’s done this while making Pressure utterly infectious. The chorus is one which sticks in your mind and refuses to budge; the sign of a master at work. Moreover, the heavy complexity of the arrangement is a great piece of musical anthropomorphism – with the countless instrumental lines and their varying roles almost representing the racing mind when you feel ‘under pressure’. And Koffee feeds off this perfectly – showing just why she won the Grammy last year.

There’s no question of her skill as a vocalist. But her delivery in this instance is furious, unapologetically raw and frantic; brilliantly so, too. Here, there’s little let-up in her forthright dynamics and timbre and it’s appropriate for the sentiment of the song. But what Koffee does so intuitively and expertly is interpret her own lyrics. She hammers home (by accenting) the first syllable of each word, building on that driving momentum created by the rhythm section. Her enunciation is perfect and she flips beautifully between staccato notes and smoother, stretched out legato phrasing. Rhythmically it’s fascinating, in this respect more rap than singjay, as she takes motifs, embellishes them – again and again – before switching them up once more; the perfect example of this being her sudden break into triplets after using dotted crotchet/quaver and semiquaver rhythms. Scintillating and compelling in equal measure.

Lyrically it’s interesting, too – discussing the pressures that we all feel thanks to the system and society. Koffee also pointedly notes that this affects us all, regardless of our social class. But maybe those with more money need to remember that. As she spits during the track: “Because yuh pocket coulda deep, have a nice pretty vehicle and all kinda visa – so life shoulda sweet. But I coulda teach yuh, hard times woulda reach yuh and the storm a nuh something calm…” Pointed and searing. Koffee at her best.

Koffee Pressure is a powerhouse of a track from the Grammy winner and Bailey. Not only does it showcase the latter’s considerable skill as a composer and producer, but also as an interpreter of lyrics. And of course, it demonstrates Koffee’s ability to write eloquent and thought-provoking words, too. But it’s her performance which makes Pressure such essential listening. We’re blessed that she finally released it.