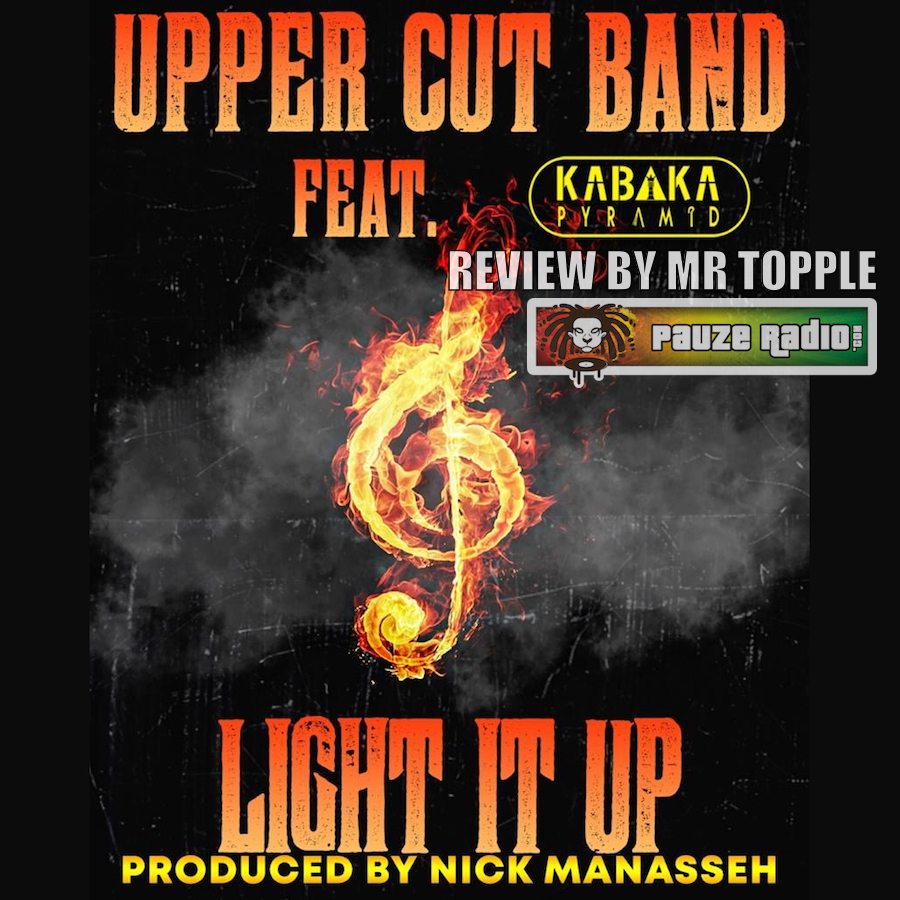 Kabaka Pyramid – Light It Up – Review

London-based Upper Cut Band will be back with a brand-new album in the autumn. But first, they’ve just released a new single featuring the legendary Kabaka Pyramid. And it’s fyah, as the bun the system down.

The track is a glorious, rich Roots-driven piece – but with some lovely attention to detail. Its opening sums this up, as it feels more Soul-driven than Roots: an affecting electric organ glissando, the keys running a quaver-led melody along with some lilting electric guitars and the hi-hats hitting every beat. But the track soon settles into Upper Cut Band’s recognisable style – with an increase in BPM, too.

Light It Up uses several Roots musical devices. Central to this are the keys, running a choppy bubble rhythm with the focus on staccato notes and the lower treble and bass clefs. But at times, they break out with some lovely additional embellishment. Then, the bass focuses on a drop beat rhythm, invariably skipping the two and three entirely, filling in the spaces with a syncopated rhythmic pattern that melodically avoids arpeggio chords, opting for its own melody. Its sound is rich and rounded, with a style moderately picked and staccato to create forward motion and breathing space. Interestingly, it lacks a one drop – as do the drums. Here, the kick hits the downbeats, while the snare focuses on the two and four with hi-hats generally running quavers. This gives Light It Up a harder, more Hip Hop edge – perfect for the Revival-led Pyramid. The delicate skanking of an electric guitar compounds the Roots sound, which also breaks out into whining riffs at points.

The additional use of an electric organ, running vibrato’d chords generally on the upbeats works well against the keys – and at times it performs a response melody to Pyramid’s calls. Bongos (or possibly djembe) patter in and out at points, as do tin drums. Then, what sounds like a clavichord briefly breaks into the fray with a rapid-fire melodic riff at points, before scurrying off again. Overall, the arrangement is detailed and evocative. But what Manasseh and Upper Cut Band have also done so well is to focus on the layering of the different instrumental lines. It’s noticeable that each play their part, but not all at once – creating a feeling of momentum but with a light, airy touch where instruments drop in and out – except for the drums and bass. The chord arrangements, working around the A minor scale, are attractive too and more at home in Soul, especially the heavy use of the minor fourth. And the track finishes as it started – with a closing Soul flourish. A nod must be given to the engineering and mastering, as well. Presumably due to the pandemic, Pyramid would have recorded his vocal separately to the Upper Cut Band’s music – yet it has been made to feel like they were in the same room, with a warm, intense vibe across it. Light It Up also has an impressive Dub version too, which is worth checking out.

As a sum of its musical parts, Light It Up is classy and inventive, but also sympathetic to Pyramid – giving him a platform to shine as he invariably does.

Here, he is forthright and unrepentant in his performance – using that now instantly recognisable style of part vocal, part singjay, but leaning heavier towards the former. His melodic arrangement on the verses is impressive, working around the mid-to-top end of his vocal register but using a motif that has its base around a three-note phrase which he then flips across the chord progressions. Rhythmically, he takes semiquavers as a starting point and then incorporates dotted versions along with some more drawn-out quavers and their dotted cousins, too. There’s a lovely bridge which comes in and out; Pyramid throws his signature skat in at points and his chorus is memorable, too. Then, Pyramid’s lyrical content then finishes of the perfection.

He takes furious aim at Babylon and its proponents, swiping at many of the noxious tools at their disposal: from manipulation, to social media, via divide and conquer, corporatism, colonialism and the space ‘race’. But his central message is that the system and those that prop-it up should be afraid, because “their time is up”: Rastafari and those of us who are conscious are onto them; “rising up” until Babylon’s walls “bun down”.

Light It Up is sterling work from Upper Cut Band and Pyramid. Musically inventive and detailed, the smart arrangement and intelligent engineering and mastering have created a quality offering. Pyramid is at the top of his game as always – and overall, the track bodes extremely well for the forthcoming album. Fyah.