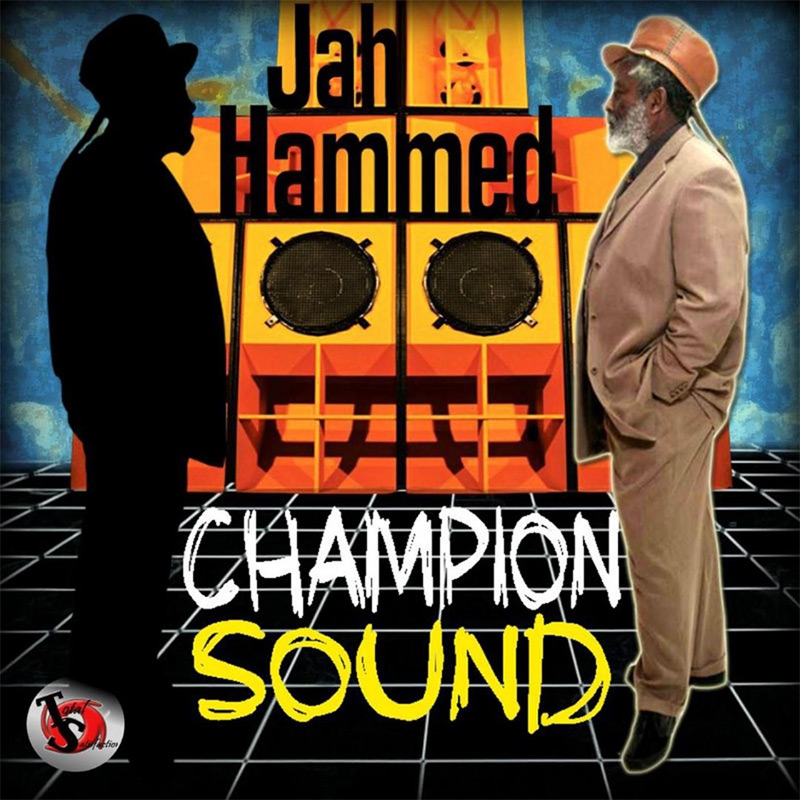 The brand new release of Jah Hammed Champion Sound, released on the 1st September 2019 features a variety of songs and a couple of really tight collaborations, with each song having the Total Satisfaction Records defined touch on production.

Leading the charge on ‘Champion Sound’, the title track starts out the album perfectly, a smooth and sweet riddim that could almost pass with some nice lovers rock lyrics. When Jah Hammed starts singing, you soon realise that it’s a sound system pleaser. Moving onto the second track, ‘Finding My Way’. Jah Hammed talks about finding his way back to an old flame for romance. A slightly uptempo riddim from the previous track, light and airy and accompanied by some sweet backing vocals, this track has a lot of heart and soul.

’Your Love’ tells the story of what his ladies love has bought to his life, sticking to the theme from the previous tune you can hear the sincerity in the vocal performance and the bouncy step in the riddim adds to the feel, another classic reggae beat, organs in the background ever so faint but equally as powerful, complementing the message of the track. ‘No Tenderness’ being the fourth track on the album, really sets the mood. Picking up the tempo again, but sticking with that classic reggae sound. It has an outlining sadness that often being alone can bring to the table but the riddim track has the opposite feel to it, warm and upbeat – which in contrast is actually a creatively brilliant move on the part of the production and composition of the tune.

Track five brings a temporary change of feel to the theme of the album, ‘County Jail’ has a ska, two step style beat, Jah Hammed talks of the experience of being locked in the county jail. Personally not my favourite beat on the album, but I really do love the lyrical content, performance and delivery on this track. Taking it down a notch and switching subject, ‘Your Touch’ reverts back to the ladies and the effect of what the right woman has in our lives and what her touch can do. Deep and consistent baselines, which almost reminds me of the Ba Ba Boom riddim. Again, I really love the vocal performance on this tune, not only is it smooth but it’s delivered well and accompanied with some smooth female backing vocals which give it extra power.

‘Dance Nice’ featuring Chronicle, which is Chronixx father. Keeping on the same riddim as ‘Your Touch’. This track will be a classic and I feel will be one of the most popular tunes on this album. Both lyrical performance and delivery are excellent. All the elements of this track will make any dance nice. The next song, ‘I’m Missing You’ switches back to the lovers feel of this album, but the transition from the previous song to this one somehow works perfectly. The vocal performance is superb and the upbeat riddim track that is bright and with a little piano stab at crucial points fits perfectly, creating a long lasting effect.

Switching up the theme of the album, ‘Informer’ has a powerful context from the outset. “Informer, where you gonna run too…”. These lyrics sit deep into the beat, this track is sending out a message to all informers that you can’t run and hide. In true Jah Hammed fashion, it has a clever use of instruments throughout the production which gives a strong final product for us, the listeners. ‘Have Some Mercy’ takes down the pace a little but with a powerful message of Jah Guidance through the Babylon system. Again not my one of my favourite riddim tracks, I found this one to be a little weak but the power in the lyrics made up for that and I sat through and listened to the message in the lyrics several times over.

‘Rastaman’ featuring Norris Man is track eleven on this album compilation. I like the contrast of Jah Hammed and Norris Man, the rawness and strength of Norris Man and the unique sound and delivery of Jah Hammed, make for a great combination and then mixed with a deep baseline and triumphant horns section adds to this message of being a rastaman and staying true to oneself, which is vital for all all of us really. Then moving onto the final track of the album ‘This World’ rounds up the selection nicely. A serious message about the state of confusion and the lack of love in the world today. Which I feel is a prime example of the message reggae should be putting out into the sphere right now. Speaking truth and rights to the people. Again another solidly produced track, using the same riddim as ‘Dance Nice’ and ‘Your Touch’

Rounding up in conclusion, this album has a variety of lovers and roots featured and I feel would appeal not only to the seasoned reggae lover but many a new ear to reggae. Production is tight and cleverly thought out, collaborations on the album are perfect and there is not too many of them, that balance I found to be right for a release. Along with that the overall quality of Jah Hammed Champion Sound is excellent and flies a flag high for Roots, Lovers and anyone that wants to be uplifted by really good reggae music.

Jah Hammed also has a solid back catalogue of hit songs. Checkout his 2003 release, working with Total Satisfaction Records on the Heartaches & Pain album, Jah Hammed’s title track for that album was nothing short of being a big tune. Also releasing on ‘Sons Of Rasta’ label through VP Records, Jah Hammed has been prolific in recording solid, classic reggae sounds.