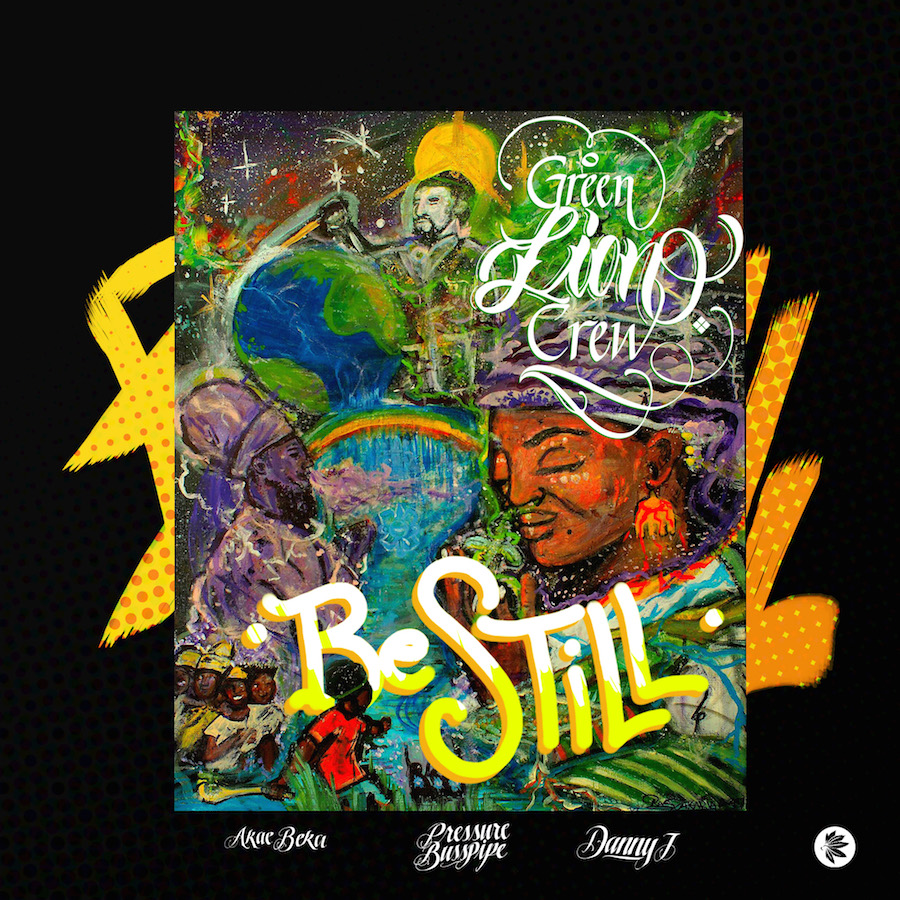 Green Lion Crew Be Still, A Brand New Album Inspired By The Music Of The US Virgin Islands.

“Be Still” is the brand new reggae album from US based producers Green Lion Crew. It’s a collaboration with 3 prominent vocalists from the USVI, Akae Beka, Pressure Busspipe, and Danny I. There are 4 tracks from each artist and 11 “dub” remix versions making a total of 23 tracks. The album is being released by Ineffable Music. Certainly an album to listen out for in the Unique Reggae Mix Show here on Pauzeradio.

Green Lion Crew has produced for artists like Collie Buddz, Chronixx, Beenie Man, Kabaka Pyramid, Lee Scratch Perry, and many others. On their latest effort they continue to experiment and expand their catalog with new sounds and techniques.

“Be Still” is truly meant to be listened to as an album and takes the listener on an ancient musical journey in modern times. Chill yet heavy, the album has the pulsing feel of the Virgin Islands where Green Lion Crew’s Dana Knowles lived for over a decade.

The album opener and title track “Be Still” is a deep heavy groove laced with niyabinghi drums, an echo drenched flute, and a thunderous bass line below Akae Beka’s chanting vocal delivery. Other album highlights include the lovers rock hit “Stay Through The Night” featuring Pressure Busspipe and Danny I’s heartbreaking “We Miss You” ; an emotional tribute to a loved one gone too soon.

The album is packed with some of the top instrumentalists in the reggae industry. Tommy Bennedetti (John Brown’s Body, Organically Good Trio) plays Drums, Bass duty is shared by the legendary Jamaican Bassist Glen Browne (Buju Banton, Ziggy Marley, Jimmy Cliff, etc) and Jah David (Zion I Kings, Jah 9). Percussion is handled by Hector Lewis aka Roots Percussionist (Chronixx). Horns are played by two other prominent Jamaican musicians, Dean Fraser and Nicholas Laraque (Stephen Marley, etc). Background vocals are provided by the lovely Adena Myrie who is Buju Banton’s sister. The album was produced and mixed by Green Lion Crew with Dana Knowles on Keyboards and Zeke Stern on Guitar. The Artwork is a collaboration between New Mexico’s Ras Zakarias and Jamaica’s Taj Francis.

One of the most powerful aspects of the album are the 11 “dub” versions included. These are essentially remixes of the vocal tracks but with a specific twist. “Dub” was invented in Jamaica and is considered to be the original remix. It allows the studio engineer to use the mixing board as an instrument and give the listener a new experience. Traditionally, the engineer mixes a stripped down version of an existing song focusing on the drums and bass as the focal point. They use a heavy dose of effects like delay, reverb, phaser, etc. to manipulate the perception of movement, time, and space.

Heavily inspired by original Jamaican dub giants like King Tubby, Scientist, and Lee Perry, Green Lion Crew do not disappoint with their sonic experiments. Heavy sub bass lines are paired with spacey drums and topped off with melodic guitar licks, vocal hooks, and choppy effect drenched instruments cutting in and out of the mix. It brings the listener on an entirely new journey with a familiar piece of music. There are two Live dub mixes contributed by St Croix legend Tippy I, member of Zion I Kings Band and founder of I-Grade Dub. “Dub Thru The Night” and “Warfare Reveal Dub” are sonic masterpieces performed live by Tippy is his studio in St Croix. Other Dub highlights include “Ganja Seed”, “Mountains of Illusion”, “Dub it for You”, and “Cornucopia of Collages”.