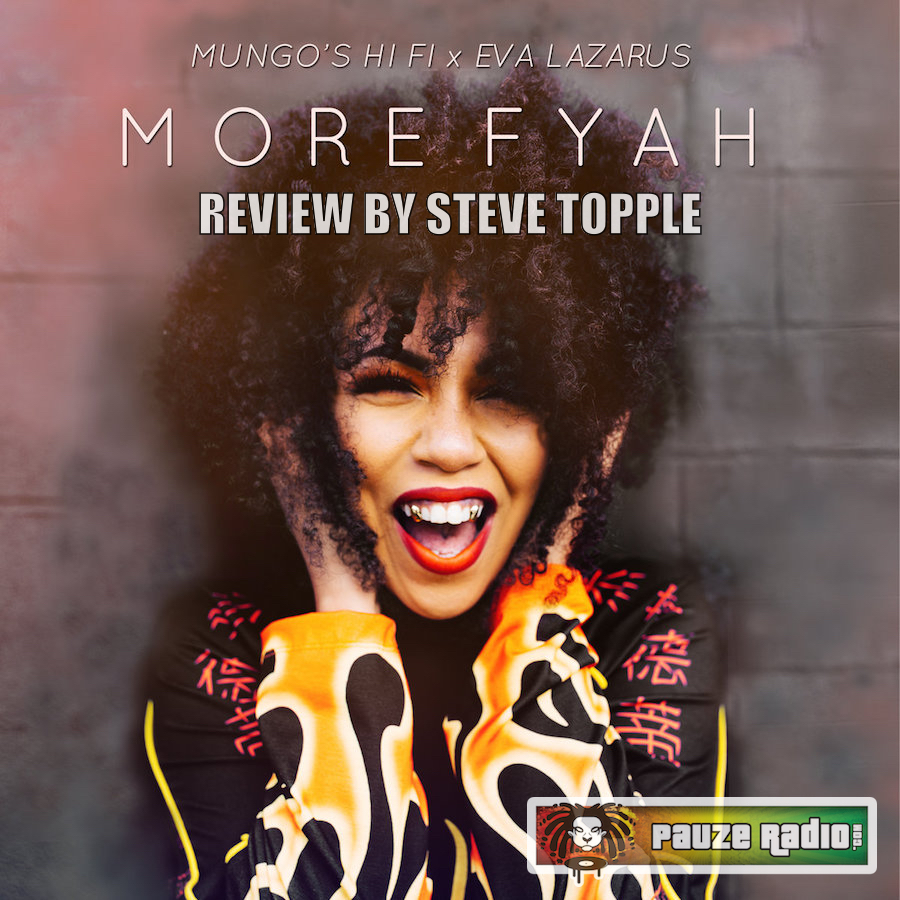 The album, Eva Lazarus More Fyah, released via Scotch Bonnet Records, dropped last year to widespread critical acclaim. And it’s deserving of this, as More Fyah is an abject lesson in how to do nearly every derivative of Reggae in one album. And do it all superbly.

It opens with Dub Be Good to Me. The track obviously needs little introduction, and I don’t want to compare it to the Beats International standard. But, it’s important to note that Mungo and Eva have put a completely different twist on it. Gone is the overly Dubby approach. Some of the chord sequences have been embellished, adding major elements when the original was wholly in a minor key. Moreover, Beats International just used the root throughout, a very Hip Hop musical device. But Mungo and Eva have created whole new chord progressions, which makes the track more rounded.

This Dub Be Good to Me uses a bubble rhythm like the original. But Mungo and Eva have added a one drop, whereas the one-and-two kick and hi hat riff on Beats International’s version was more Hip Hop. Overall, the focus on Roots devices and a rousing horn section takes Dub Be Good to Me into Roots-Ska territory, making for an impressive reworking of this classic.

We Weren’t Made for This takes us firmly into Ska territory. It’s a proper, stomping track with superb 21st century nuggets of musical excellence coupled with more traditional elements of the genre. The horns are forthright and rousing. The ‘one-and-two-and…’ percussion is incessant and frantic. The bass is persistent and driving. But Mungo and Eva mash this up with some almost EDM-esque synths. Also, the layered arrangement of the track builds the intensity. But it’s Eva’s vocal which truly shines. Her ability to rattle out syllables at a rate of knots, all while maintaining crystal clear enunciation, is impressive. But also, her phrasing and intonation just adds to the Ska package: creating a brilliant piece of storytelling which grabs you, shakes you and then tosses you to one side.

The title cut was perhaps one of the most recognisable tunes of 2019. And my, is it a banger – pure Jungle, which is so good to hear. More Fyah is a perfectly constructed track for the genre. It starts off total Dancehall, with that clave ‘oneee-two-and…’ rhythm on a pulsing 808 and Eva’s mix of singjay and vocal. But the synths strings coming in on semibreve, single notes and the sudden, rising synth indicate where it’s heading: straight to a quick drop and then we’re off.

What’s so good about More Fyah is the arrangement is back to Jungle’s roots. The frantic, triple time percussion isn’t always present. There are breaks for the music (and listener and/or dancer) to breath. The arrangement has well-executed peaks and troughs, and the engineering of Eva’s vocal is exquisite. A top-quality, intelligent Jungle cut.

Next up is Amsterdam. It feels like it should be Roots. A proper old skool bubble rhythm is there, with the left-hand piano line dropping the offbeat chord and the right tinkering around with its own melody. The syncopated bass has a Rocksteady feel. The kick on the second and fourth beats, with the double time percussion, is a clear one drop. Eva’s (again) impressive singjay and vocal mix is the genre all over. But it’s still not quite Roots. Her rhythmically complex, almost harmonically improvised vocal with its intricate runs and portamento is more Jazzy-Soul. The inclusion of some smoothed-out strings takes it to RnB. But Eva’s rap, for me, tells me where this is. It’s Neo Soul, but with a Roots grounding. Pure class.

Light as a Feather on the other hand is pleasing Roots-y Dub. It features the strong vocals of Kiko Bun. But Mungo and Eva’s clever arrangement, production and engineering still manage to put their own stamp on the track. The guitar skank isn’t consistent, going from each offbeat, to not at all, to just the second and fourth. The bass line, on a constant beamed riff, has been engineered to be more prominent, driving the Dub feel. Synths here and there add to this. And Kiko’s bridge features some punchy tripleted scoring. Another smart piece of composition.

The track Babylon Raid is another fine piece of Jungle, with all the clever elements of More Fyah earlier. But it’s also a brilliantly conceived track. It opens with a sample of Max Romeo’s original Babylon Raid. But when it switches to Jungle mode, Mungo and Eva’s narrative also switches – bringing some up to date storytelling to Max’s original. The lyrics are superb, probably some of the best on the album. It’s so, so intelligent and works so, so well. And yet again, Eva’s vocal truly impresses. It’s actually the track which shows her versatility best – effortlessly switching between smooth, then frantic vocal and singjay/rap – all soaring across octaves and with sheer furious intonation. Perfection, personified. Inspired.

Live My Life is a winding, Dancehall affair – but Mungo and Eva cannot help but mash it up again. The inclusion of a tuba is a genius move, as it adds to the thrusting, driving nature of the bass, on a clave variant. The percussion hammers home this ‘marching’ feel, with a kick on a ‘one-and’ on the upbeat. The fleeting piano, some times dropping in a bubble rhythm, at other times tinkering of its own accord, just adds to the ambiguity. It’s Dancehall, but somehow Dancehall to strut forward to.

Next, and Gasoline suddenly takes us into Hip Hop territory. It’s as if Mungo and Eva have mastered every Reggae-based genre going, as yet again they’ve produced a class cut. The incessant piano chords, the drum focus on the kick, hi hat and snare, some fleeting, orchestral strings and an RnB riffing bass all hark back to the golden era of the genre. And Eva’s full-of-attitude rap and vocal instil the feeling that she’s the reincarnation of a certain Fugee…

But Warrior Code propels us about ten years forward, straight into Grime. The bass is interesting, as it’s on a Dancehall clave at one point, but as the cut kicks in, it smooths out into that recognisable strung out, pulsating line – which gives the feeling that the BPM is actually half the rate it is. Heavy on the synths and samples, the signature synth woodwind and string effects of the genre add to the dirty Classical feel. But what Mungo and Eva have also done is mash up Jungle vocal sensibilities (a soulful, smoothed and beamed chorus) with some caustic, searing MCing. The whole package is broodingly brilliant.

More Fyah finishes with Bad Gyal. It perhaps sums up the entire project as it’s almost impossible to box in. The opening rhythmic arrangement, focusing on the ‘one-twoooo-andthree’ screams Ska. But the pulsating bass says its Dancehall. But it’s not a clave, it’s a rapid RnB riff that then emulates Rocksteady by mimicking the melody at times. Synths make you feel Dubby. The triple time percussion says Jungle. But it shifts between accenting the second and third beat, making it ambiguous. The stripped back nature of the percussion then says Grime. But then the bass suddenly gets distorted and dirty, bringing in Drill. Effectively Mungo and Eva have created a melting pot of genres, which neatly finishes off the album.

It’s hard to lavish too much praise on Mungo and Eva for More Fyah. In terms of the musical expansiveness, its extraordinary how much ground has been covered, and how well it’s been done. If I were to make a comparison, it would probably be with Lauryn Hill’s The Miseducation Of… Not least due to the inventiveness of the compositions, taking genres and moving the boundaries upwards and sideways. Moreover, because they’ve done this while keeping the record truly conscious. But also, because Eva’s vocal performance is stunning; possibly one of the most impressive voices the UK has produced in recent times. Overall, it’s the sheer quality which truly astounds. Surely one of the albums of the last decade, which should be noted in the musical history books as such. Amazing. Written by Steve Topple for Pauzeradio.com (5th February 2020) 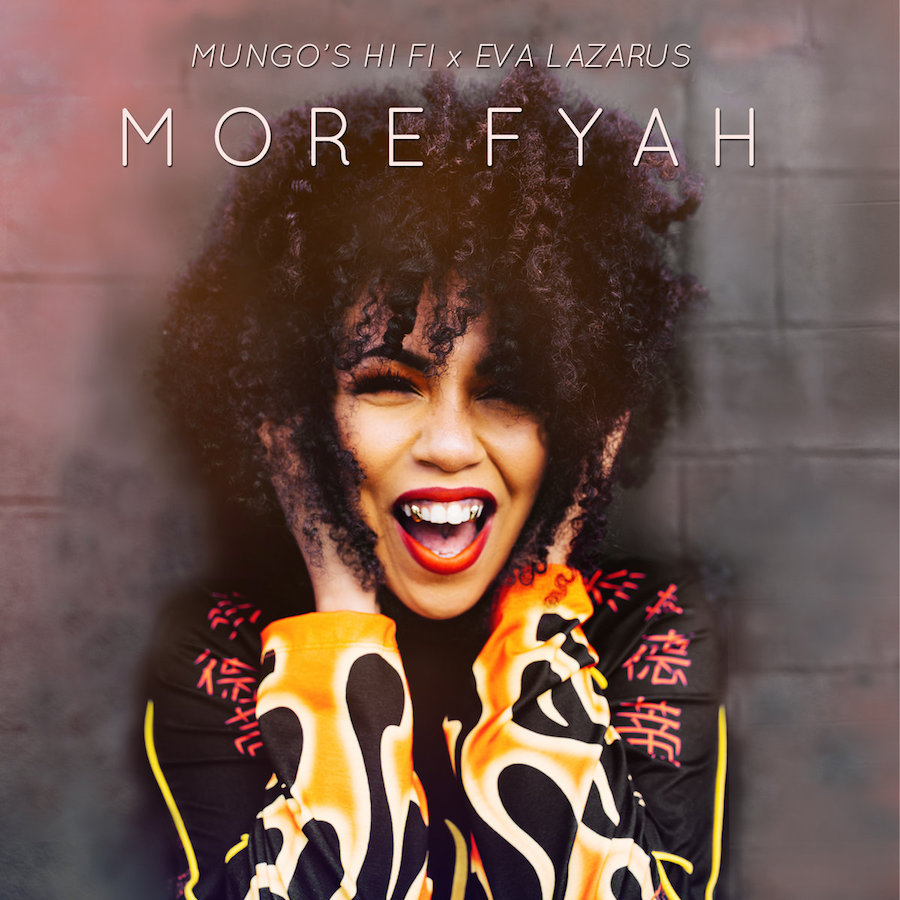