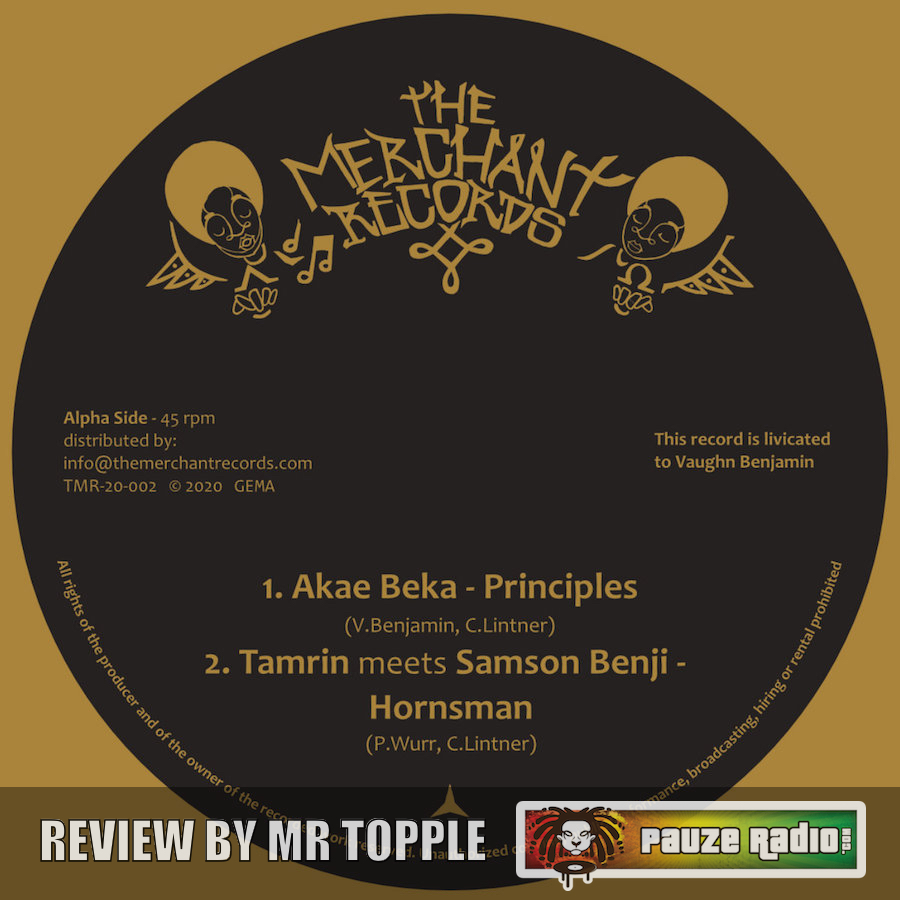 The second release from Germany’s The Merchant Records has just cemented its status as ‘one to watch’. Because the riddim and its interpretations are a rich and cleverly orchestrated affair – showcasing the label’s musical ‘principles’ perfectly.

Earthman Riddim EP, released via The Merchant Records, sees producer Tamrin The Merchant create a brooding and somewhat haunting sound, which is still resonant enough so as not to feel unsettling. The story behind it is fascinating. Originally a raw riddim, after Tamrin sent it through to the artists he decided to flesh it out. Musicians came on board: Niko Youngheart on drums; the guitar from Junior Jew; Ras Andi across additional percussion and the keys and electric organ from Samson Benji. The end result is lush and fulsome Roots with elements of something more Soul-influenced throughout.

The basic arrangement works very much around dotted rhythms, taking some rudimentary Roots’ sounds and then embellishing them further. Youngheart’s drums are endemic of this. The hi-hats lead across repetitive and fairly legato ‘oneee-and-twooo-and’ dotted notation; the snare hits the two and four but the kick avoids a tradition one drop, instead striking the downbeats. This arrangement provides a fluid momentum: not too choppy, but still with enough forward motion to make the very slow BPM not feel static. Ras Andi’s additional percussion is delicately placed, too: blocks tinker almost out of earshot; bongos’ patter on occasion and a washboard complements all this well.

Benji’s keys and organ take Earthman’s dotted notation theme further. They’ve used the idea of a bubble rhythm but expanded on it. The keys perform this in a straight and stark manner, with a decent amount of reverb laced across them. There’s little variation from the basic, offbeat chords. But then the organ interplays with them. It works around a ‘and-twooo-anddd’ rhythm; heavy on the vibrato and joining the keys on the offbeat – so as to create what, at a distant listen, sounds like one instrument, when in fact it is of course two. It’s a clever arrangement which elevates that traditional bubble rhythm to higher plains. The organ then veers off on the pointed breaks and bridges into more soulful territory – running on-beat, elongated chords on the breaks and bridges. Jew’s guitar plays into the keys’ and organ’s lines, running a skank which interestingly morphs into a double-time one at points.

On top of the rhythmic motif of dotted notation, there’s also a melodic one that runs through Earthman. And the bass uses both. Its rhythm is a drop-beat one, skipping the two (but only because of a semibreve) and then providing dotted notation from the offbeat after into the three. But otherwise, it focuses on the beats directly and little else – serving as a perfect accompaniment to the smoothed-out drums. Benji’s organ also enters the melodic motif fray at points, copying the bass’s line. Then, his sax threads everything together. It runs a separate melodic motif to the bass’s – offering a response to its calls; again, across dotted notation and done via MTR to create harmonies.

Overall, to call Earthman Riddim ‘Roots’ would be unjust. While the main musical device (the bubble rhythm) that it is centred around is, there are elements of Soul thrown in too. Not least in this are the chord progressions: the C minor root to the major 7th then to the minor 5th is delicious. And the punchy, staccato opening break where all the instruments hit the same, dotted rhythm is straight out of a Funky Soul playbook. So, the riddim itself is smart, intuitive and sumptuous. This gives the perfect platform for the artists to then bounce off.

The late Vaughn Benjamin (Akae Beka) opens proceedings with his interpretation Principles. There’s no introduction needed for his voice. But here, he is particularly compelling – working between a straight vocal and an almost vocal spoken word style. Benjamin has honed in on the riddim’s underlying dotted notation motif, using it to good effect. Across his spoken word-like verses, he swerves between using quaver then semiquaver led ones – and also throws triplet sequences into the mix. On the chorus, Benjamin brings it back to a more recognisable style. Melodically, he works around the seventh of the scale, up then down – at times settling into a similar pattern around the fifth. It’s a clever musical trick, as it echoes the sax’s line but creates a third melody on top of it and the bass. Overall, Benjamin is poised and purposeful, as he discusses class warfare, how the system metes it out and what we as communities need to do to counter it. Rousing work.

Track two is an impressive sax solo from Benji, across the aptly named Hornsman. It’s always a sign of the quality of a riddim when it can carry an instrumental version, and here is no exception. Benji forms a melodic line as a chorus, in part from the bass’s underlying motif. But on the verses, he then goes up and to the side of this. Much like Benjamin, his performance focuses on dotted notation – including a wonderful bridge section where the sax line is increasingly layered in harmonies. Benji uses the full range of his instrument – soaring up and down its register. But most notably from him is the sheer amount of light and shade he delivers – taking the sax from a purring mezzo piano to a robust forte. Benji also includes a nice amount of well-placed vibrato, and the whole performance resembles that of a mature Soul singer, in terms of the melodic intricacy and expressiveness. Exquisite.

Next, and Ras Hassen Ti delivers Earthmen. Of note is that Tamrin has mixed up the riddim somewhat, here. There’s an additional line from the keys which has expanded on the bubble rhythm with additional improv syncopation. Also, the sax has an extra layer at times. Then, enter Hassen Ti to finish this off perfectly. He has a fascinating voice, which he utilises to very good effect here. His backing vocals often work in his falsetto range, performing straight harmonics and then some responses to his main call. But listen closely and you can hear him also working in a low tenor/baritone, too. And Hassen Ti’s main performance is equally impressive. Smooth, elongated and pointed, he is rhythmically less syncopated than Benjamin – but the focus is still on dotted notation. He has an attractive vibrato; his enunciation is crystal clear as is his pitch – and overall, the lyrical content which focuses on living by a spiritual mantra, driven by Jah, is affecting. Sterling work.

The Earthman Riddim EP closes with the title track from Iman. It follows the same embellished arrangement as Hassen Ti’s track, but this time takes it further. There’s additional solo work by Benji’s sax, which responds beautifully to Iman’s calls. The inclusion of a slide whistle (or similar) is delicious. Also, the instrumental bridge is glorious: the keys break out into proper improv, then, the bass suddenly steps things up a gear, going on a quaver-led walking riff. Then, from about 3:30 minute there’s a brilliant additional bridge – drawing on that Funky Soul opening break with punchy chords. And overall, Iman’s performance is perhaps the most stripped back of the riddim, in terms of musically less is more. He keeps the rhythmic arrangement unfussy with less syncopation – opting for more stretched-out notes. Melodically it’s interesting, as he glides effortlessly up and down his register; like Hassen Ti using both his tenor and falsetto ranges. And Iman passionately discusses maintaining faith and spirituality against the system’s constant barrage of carnage. A strong close to the riddim – and perhaps, as a sum of its parts, the best overall cut of them all. Stunning.

Earthman Riddim EP is quality work from Tamrin, his label and all involved. It exudes class across the composition, arrangement, musicians and vocalists. The use of motifs is particularly impressive; the artists’ interpretations are all stellar and the whole thing bodes very well for future The Merchant Records’ releases. Impressive. 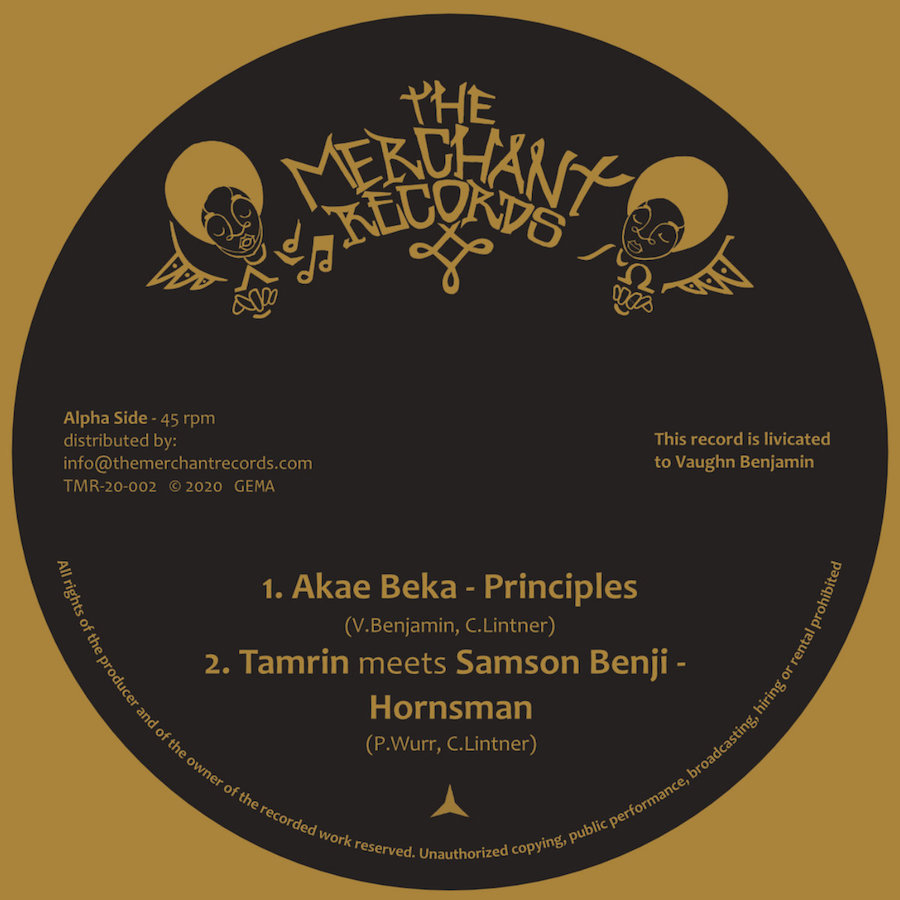