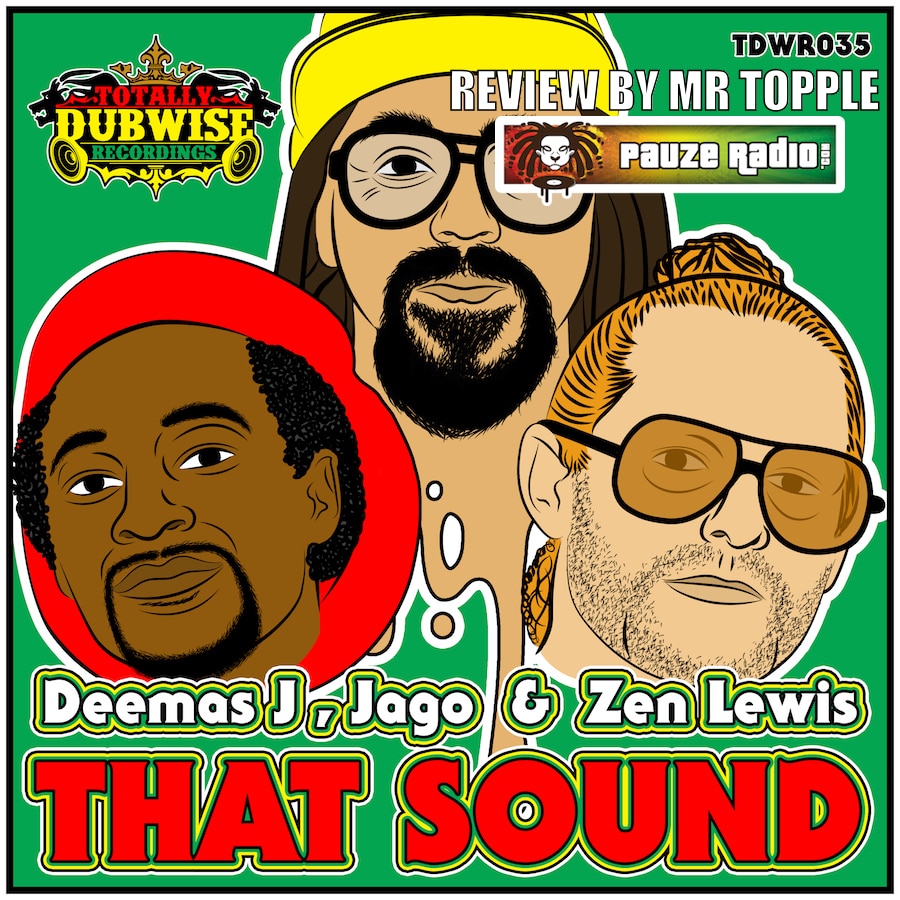 Totally Dubwise Recordings are back with another fresh track – this time on a frantic yet effective Reggae/Dub Ragga-Hop tip.

That Sound, released via Totally Dubwise Recordings, sees the label team up with vocal artists Deemas J, Jago and Zen Lewis. A departure somewhat from the label’s previous work – which was heavy on both straighter Reggae and Dub, and Jungle, – because here, production focuses on Reggae and Dub while bringing in elements of Hip Hop and Dancehall.

The production by Ant Henderson from Mellowmatic provides some traditional Reggae devices to start with. Keys run an omnipresent bubble rhythm that moves across the track incessantly. Meanwhile, a guitar skanks at points, while at others runs a downward riff – all of which is highly picked in style. Horns are gorgeously arranged: shrill and staccato, they focus on responses to the main arrangement and vocalists’ calls, with melodic lines that work up and down their registers. Cleverly, at times the sax does some funky improv riffs which have had the dB reduced to give an almost ‘next room’ vibe.

The bass however doesn’t totally fit the Reggae mould. It hits every beat, focusing mostly on crotchets on the first part of the bar before doing a riff for the second half. It’s arranged deep down its register, with an almost 808 rich, resonant sound – while the style is smooth, juxtaposing with the other choppy instrumentation. Then, the drums aren’t really Reggae either run a Hip Hop style beat – with the kick on a four-to-the-floor, the snare on a syncopated riff that focuses on the two and hi-hats persistently filling the gaps in between – with good use of cymbal clashes at the end of certain bars. Just to mix things up, there’s suddenly a brilliant Dancehall bridge, where that traditional clave (‘oneeeeee-twooo-and’ x2) enters from nowhere – and steals the show.

There are some nice Dub touches as well. The breaks work well – fitting perfectly with the vocals and bringing some pleasing stripped-back instrumental lines in. Well-selected synths and samples weave in and out and bring atmosphere to the track – like spaceship guns. Then, the engineering is very Dub as well – with good attention to detail on the reverb, it being very rhythmical and evocative. The final master by Sappo is as usual of an excellent quality, too – with the track ending bass-heavy but with the horns and synths also coming to the fore, along with the kick – to make the Reggae devices sound secondary to the beat and the more diverse instruments.

Lewis’s main vocal is well executed – a straighter singing style, based in something soulful as he uses his mid-to-upper tenor register to deliver a stylish performance. Lewis also breaks into an effective singjay at points – and even some spoken word via his British accent, which is great. Deemas J also delivers the goods – with a his sharp yet rounded singjay style, in a high baritone range where he treads that fine line between singjay and straight vocal well – with good attention to detail on the melodic line. Finally, Jago’s contribution matches this but with a far gruffer delivery than Deemas – and when the two get to work on the bridges, it’s brilliant, as they turn to rapid-fire rhythmic patterns in an almost battle-style affair where neither drops the pace at all.

Overall, That Sound is brilliant work from Totally Dubwise and all involved. Fresh, inventive and infinitely memorable, the production is great, vocals are slick and as a single, it deserves to be a hit. Superb works.