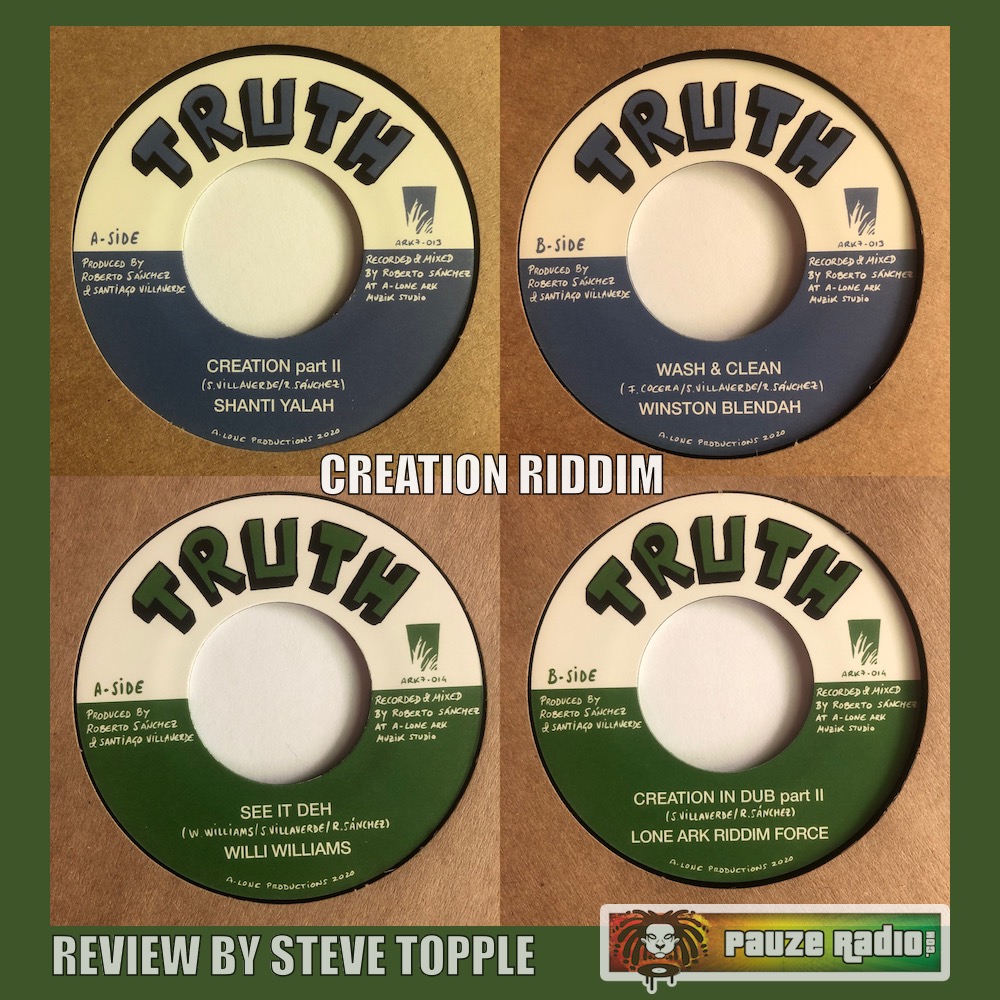 If something was good the first-time round, then quite often it doesn’t need changing. But a delicate bit of tinkering often creates something magical. And a newly reworked riddim, just released on two 7”, is the perfect example of this.

Creation Riddim, released via Truth and A-Lone Productions, is a glorious foray in heavy Roots and Dub. It’s based-on Shanti Yalah’s song of the same name, from his 2017 album also of the same name. But producer, composer and engineer Roberto Sánchez with Lone Ark Riddim Force have reimagined the original – and used its fundamental structure to very good effect. Gone is the overly smooth, African feel; replaced by a concertedly more abrasive, Roots-led vibe – but still with nods to the Motherland.

The riddim itself is a deliciously arranged piece of haunting Roots from Sánchez. He’s altered the key, upped the BPM and changed the orchestration versus Yalah’s original. The horns are the dominant feature, here – taking centre stage across the basic riddim. Opening on a clever riff (quaver-double semiquaver-semibreve-quadruple semiquaver-crotchet-crotchet-semibreve to be precise) the tone is set from the start: regal, pointed and with the air of heralding something magical about to begin. This musical word painting fits the title of the riddim perfectly; with the horns being almost angelic in their refrain. They continue their exalt throughout the riddim.

What’s also been done so cleverly is to incorporate both the melody and the rhythm of the horns’ initial refrain across the other instrumentation lines. The keys, while driving a bubble rhythm across much of the track, briefly pick the horns’ melody up at the start of the track, almost working as a fleeting canon (a ‘round’ where the melody is repeated, but started at different times – see ‘Row, Row, Row Your Boat’). The bass, while not following the horns’ melody, does imitate parts of the rhythm in its persistent riff; a veritable Rocker’s one, being heavily syncopated, working predominantly on the root triad and dropping the third beat. But this drop is momentary, as it comes straight back in on the following off.

Elements of Dub are brought in, with the heavily elongated reverb on the high-passed electric guitars being a notable feature. The same technique is applied to the horns and keys at points. But what’s most noticeable is the lack of a straight one drop. Instead the kick is hitting every beat; the hi-hats do the majority of the work, leaving the usually prominent snare to just do rim clicks. Additionally, more African percussion is also brought in – bongos, djembe, shakers and triangles – again a nod to the origins of the title. The whole affair is extremely strong: musically intricate, compelling and also respectful of both Yalah’s original and the meaning of the title. Sánchez’s production is top-rate, naturally – with the engineering providing just the right detail to force the repetitive horn hook to the fore, which ensuring the percussion and bass keep Creation Riddim moving. Meanwhile, it also gives the featured artists a solid fundamental base to work off.

First up on 7” release number ARK7-013 is Yalah himself with Creation part II. It’s fascinating to hear him work across a reinvigorated version of his own track – and also, conversely, shows his progression as an artist. The basic lyrical and melodic structures are the same. But Yalah’s voice has clearly developed with time. Compared to his 2017 cut, his timbre is stronger, more confident and also clearer. He seems to have also reflected on his lyrics somewhat, as his use of intonation, dynamics and syllable accenting has changed – giving prominence to certain phrases, where before his whole approach was more smoothed. The result is, indeed, “Creation part II” – not only a musical reboot but an artistic one from Yalah, too. Stirring stuff.

Winston Blendah is on the B side with Wash & Clean. His style is different to Yalah’s: less vocal-led, more singjay orientated, he hones in on the Roots base of the track and accentuates this. His singjay is brilliant – using a clever mix of repetitive rhythms which are then juxtaposed by more improvised phrases – these also fit with an increase in his dynamic, fitting too with the lyrical content. His voice is engaging, and lyrically it’s stirring work – as Blendah discusses how the world, and society, needs to be washed clean of Babylon’s influences.

The second 7” vinyl to feature Creation Riddim is number ARK7-014 from Willi Williams, with See It Deh. He’s a seasoned artist, skilled at the delivery of complex messages – which shines through on this cut. His voice is effortless, gliding across not only his melody but the riddim as well – and he has all the qualities which would lead you to believe it was a one-take record. Williams’ gives the feel that the track was recorded as live – with his musing phrasing, purposeful pauses for both breath and almost thought, before continuing his sermon and harmonic improvisation. There’s a haunting, unsettling quality in his voice, too – it’s gravelly in its timbre but also delicate, which grabs and holds your attention. And his lyrics, about how the world is corrupted, and we all need to spiritually wake up and see this, are potent, stirring and pertinent at this time.

Side B of this release features an instrumental Dub from Lone Ark Riddim Force – again, classily arranged and produced which also serves to give you the full depth of the riddim itself.

Creation Riddim is an extremely smart piece of work. It’s no mean feat to take an original piece and reinvent it without removing the original features. But Sánchez and Lone Ark Riddim Force have done it impeccably, creating a solid grounding for the artists to bounce their substantial skills off. Clever and pleasing in equal measure. 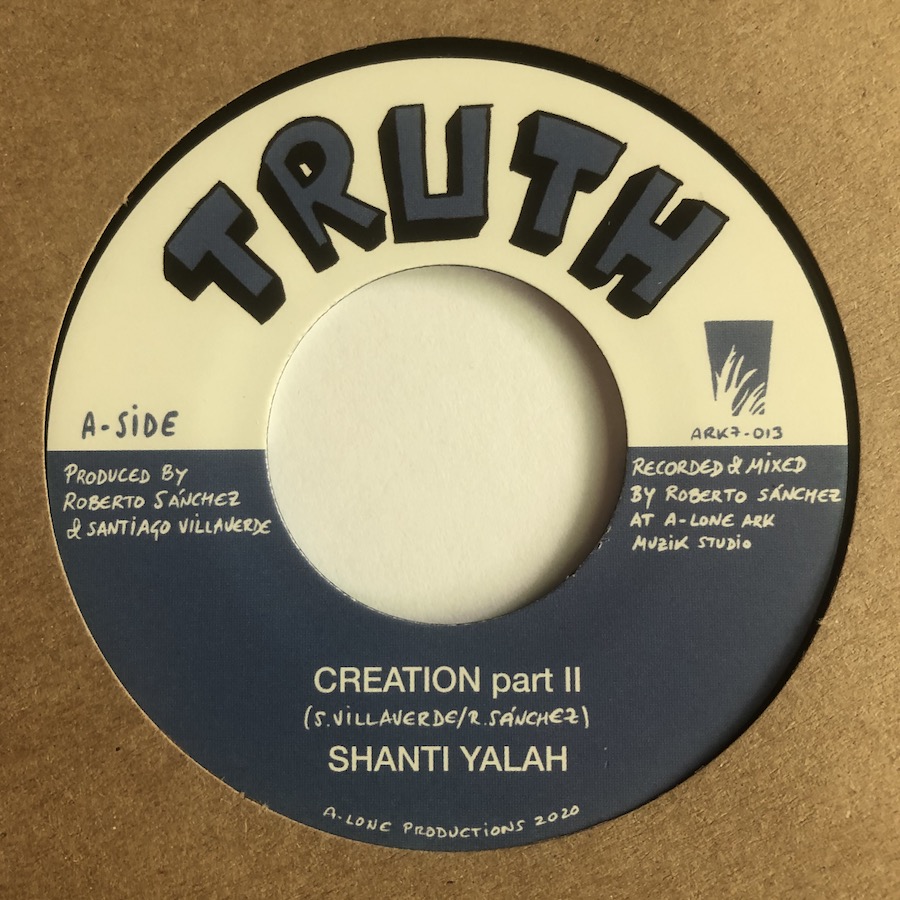 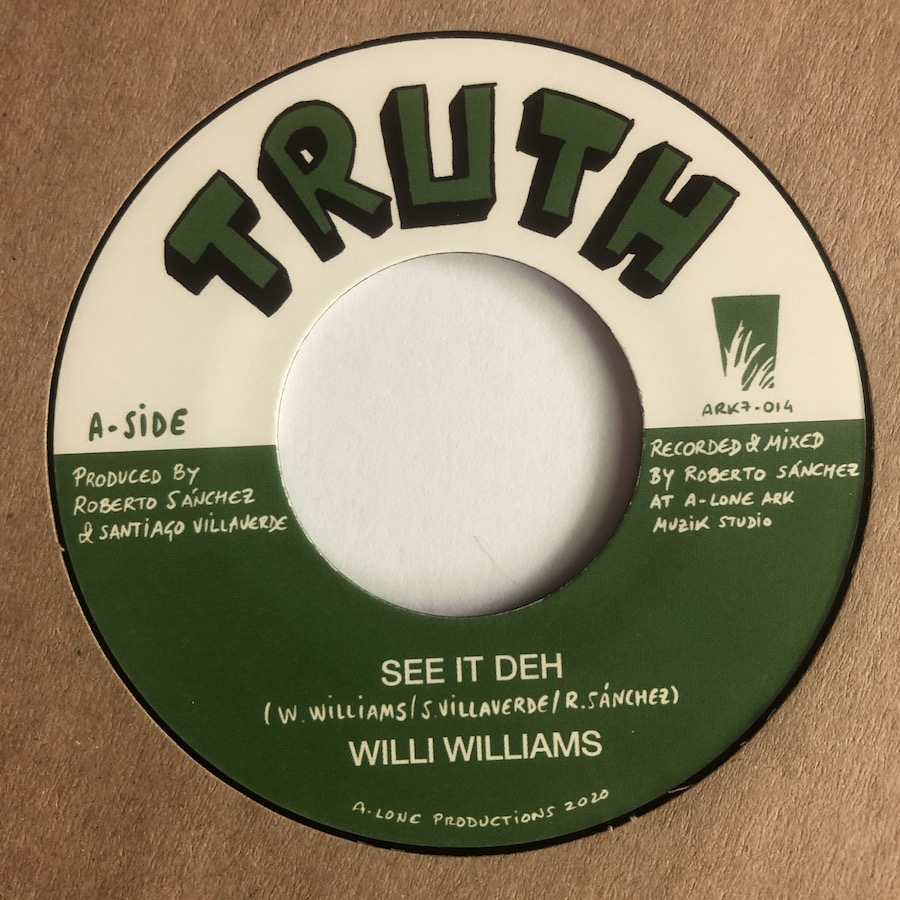