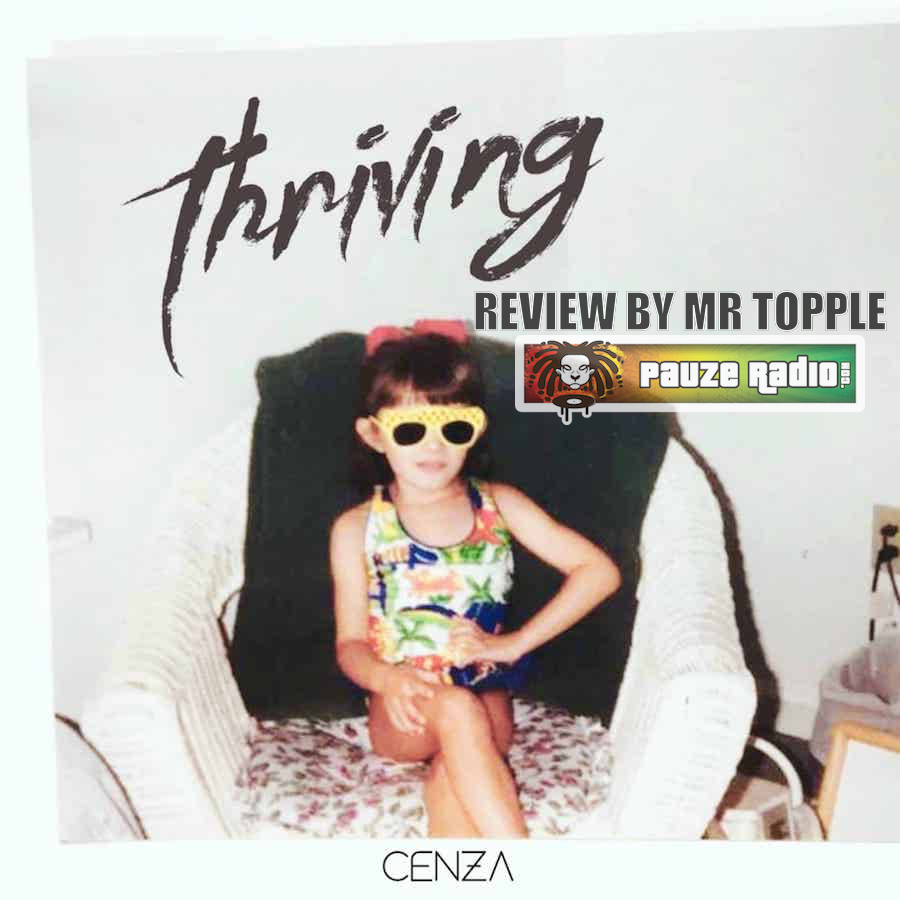 At Pauzeradio, we’re committed to thinking outside the Reggae box when it comes to artistic talent and supporting emerging acts. With that in mind, here’s introducing the latest track from New York-based Cenza. And it’s dynamite.

Cenza Thriving, released via MGNancy Records, sees Cenza team up with Jean-Luc McMurty and Mike Abiuso across production duties, with the song being penned by herself. It’s atmospheric, brooding and unsettling – and draws on various genres to create a thoroughly modern yet classic sound. Because there’s something of the ‘Jhené Aiko meets James Bond in a smoky Soul club to discuss 90’s Trip Hop’ about Thriving; essentially making it a Neo Soul cut.

McMurty’s relentless, imposing and deeply resonant bass line is central to the track. Not only does it lead the melodic thrust – driving the chord progressions by generally working off the root – but it dominates the rhythmic arrangement, too. It uses that 90s Neo Soul device of lagging behind the beat (note how it comes in on the off before beat three), which forces the chord progressions to do the same. But it also has the overall arrangement (lazily strung out at times, then working off crotchets at others) of more modern Toronto RnB. This leaves the bass as an imposing, unnerving force across the track.

Thriving’s other main drivers are the drums. Hip Hop in their arrangement, the snare hits the two and four with the skin; then rim clicks are brought in before hi-hats, absent at first, eventually arrive on heavily dotted rhythms. McMurty and Abiuso’s building of the arrangement is a clever move, as it creates a gradual crescendo in the track – pushed along by the wonderfully scored strings.

They’re perhaps the most ingenious feature of Thriving: cinematic yet classic Soul too in their arrangement. Starting off by working across breves, then semibreves, then crotchets and jumping up and down octaves, they like the drums build in syncopation, layering and melodic arrangement. Their final flourish, running a diatonic countermelody across semiquaver/quaver/crotchet staccato notes, is glorious – and is a well-arranged piece of musical anthropomorphism, projecting the lyrics increasing frustration and dogmatic resolve. A rasping electric guitar, heavy on the mid and treble of the amp, screams in and out – and there’s an electric organ, almost out of earshot, running a dampened melodic riff at times.

The Toronto-esque bridge is glorious, too – where much of the instrumentation is stripped away and Cenza’s voice is run through a vocoder-type device, to create a dream-like, otherworldly aura before the heavily arranged climax begins – one where the bass line and string’s syncopation increases and the vocals become heavily layered across multiple lines.

But the overall feel of Thriving is something else entirely – almost Aiko-Toronto-Trip Hop. The opening sequence with its distorted, scratchy phone call samples, and Cenza’s raspy, melancholy vocal – coupled with the Hip Hop drums, electric piano and orchestral strings – feels like something Portishead would have been proud of (note Glory Box). This overall fusion of elements of Hip Hop, Soul, cinematic orchestration and modern atmospheric RnB has given the track a 2020 Neo Soul vibe – and one that feels fresh and intelligent. Cenza’s vocal, meanwhile, compliments this all perfectly.

She undoubtedly has, and will be soon recognised to have, a very unique voice. Clearly influenced by the grandiose divas of a by-gone era, she has a gorgeous timbre; containing a rich chest resonance which at points gives way for something more rasping and nasal – providing an added layer of expressiveness to her performance. She has a decent range, moving between a fairly high soprano and something of an alto (which explains the shifting timbre). Her vibrato is slow and elongated while being well-controlled. But it’s Cenza’s interpretation which is wonderful. Like all classic divas, she has the ability to switch between a growling, waspish delivery and something gentler yet passive-aggressive – never straying into sentimentality. She makes good using of varying note length to marry with the lyrical content and phrasing, and her breath control is impressive, never mismatching the structure of the words. Her lyrics are fierce, too – as she bluntly tells a man to fix up, or get his fix elsewhere. Fiery, unapologetic and strong: the hallmarks of a true diva.

Cenza Thriving is pure class. Expertly orchestrated and arranged, with production which manages to tread that fine like between classic and modern, it sits firmly in modern female Neo Soul territory Aiko, Mahalia and Ari Lennox have been leading the charge towards. Cenza is a delight – and the whole thing bodes extremely well for her forthcoming debut album. Delicious.

Find out more about Cenza by visiting her website here.