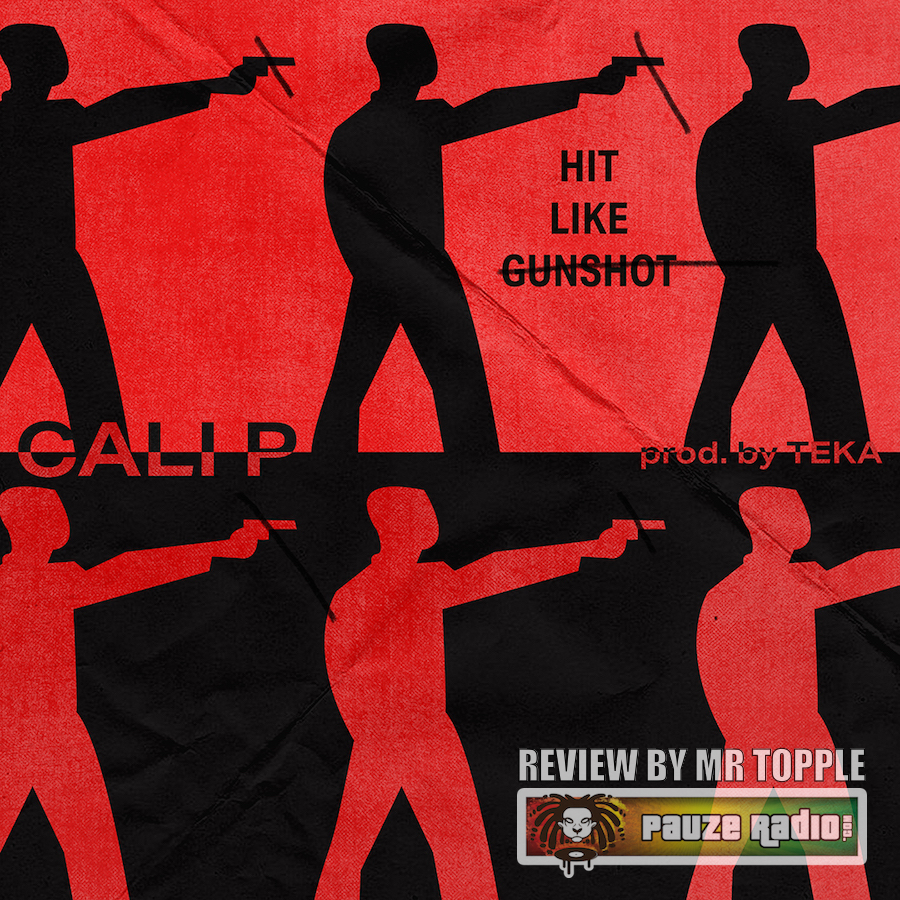 Cali P is the master of hard-hitting, searingly conscious yet modern and accessible music. His EPs with producer Teka (Vizion I and II) were both works of art. Now, in response to the murder of George Floyd, the two visionaries are back – and the result is succinct and furious.

Cali P Hit Like Gunshot, released by LowLow Records, is an evocative track; lyrics written by Cali P while in coronavirus lockdown in Gambia. Teka’s production is as to be expected: detailed, infinitely well-balanced and with streaks of inventiveness littered throughout.

The track is ostensibly Afrobeats. Drums focus on the snare, switching between rim clicks and on-skin hits and flipping between on and off beats – creating that stuttering, edgy sound the genre is known for. But tom-toms are also brought into the mix, and hi-hats tinker in the space created between the other two. It’s an intricate arrangement, going above what would be standard in most Afrobeats.

But Teka then brings some Roots sensibilities into the mix – as the kick does an effective one drop, avoiding the first beat of each bar then hitting dotted rhythms on beats two, then alternating between one and two hits on beat three. Meanwhile, the bass does similar across various rhythms, which reflect the other instrumental arrangements and work sympathetically with the lyrics. It mimics the kick during the verses, dropping the one and filling in occasional additional beats at the end of the bar. But at times it hits the one before becoming more syncopated, in line with the increase in other lines’ complexity.

The two instruments together create even more edginess, drawing the focus away from that initial downbeat. It’s pure musical anthropomorphism – a rhythmic representation of a deep intake of breath, just before something tragic is going to happen. This pause also leaves space for just one instrumental line to do its work.

Hit Like Gunshot’s electric guitar arrangement is another fascinating element from Teka. It’s almost RnB with its slow, arpeggio chords. But the use of the amp has created something more rasping – the focus being on the mid-to-treble, with it sounding like it’s being played nearer the bridge to give that scratchy, harsh sound; again, scalding musical anthropomorphism of cries for help.

There’s also a haunting string arrangement at times, working in the bass clef and slightly distorted then compressed to create yet more unsettling vibes. The use of a grimy theremin-like synth, which jolts between the left and right input and has rapid decay ebbing and flowing off it, adds to the brooding. The use of gunshot samples is respectfully balanced. And overall, Teka has created a pitch-perfect partner to Cali P’s performance and lyrics.

He’s undoubtedly one of the most accomplished artists in Roots-based music. Not dissimilar to Kabaka Pyramid (who’s also just released an equally pertinent track, Babylon Fallin), Cali P has a gorgeous way of mixing vocal and singjay together to create something accessible and aurally pleasing. His dynamics peak and trough, and syllable clipping fits both the lyrics and the music. But it’s his use of varying degrees of rhythmic and timbre intensity which are to be commended most. Cali P goes from gentle, pared-back and melodically sparse vocal, to hitting eight syllables a second at one point – and the overall effect of these waves of intensity is an emotional punch, delivered with sincerity.

Moreover, he is ultimately a poet rather than a lyricist; the latter being a somewhat lazy term to describe him. The words speak for themselves on Hit Like Gunshot, as he gives a highly personal account of systemic racism and the system’s entrenchment of it. Little more needs saying, when he sombrely muses: “Slavery abolished, but nuttn demolished. The schooling system support the damage; media mek you panic. Controlled economics, historical bandit”. But there’s one line which hits harder than the rest, as Cali P devastatingly proclaims: “No reason for me to leave Africa, and be killed in America”.

Cali P Hit Like Gunshot is brutal yet dignified, unflinching yet urgent and wholly moving. The marrying of Cali P’s lyrics, raging for “justice and peace”, with Teka’s profoundly unsettling composition, shows the depth and synergy of the two’s relationship. But it also demonstrates their abilities to transfer the most emotive of issues into art. A musical protest cry that screams at you from the depths of both men’s souls. Heartfelt.