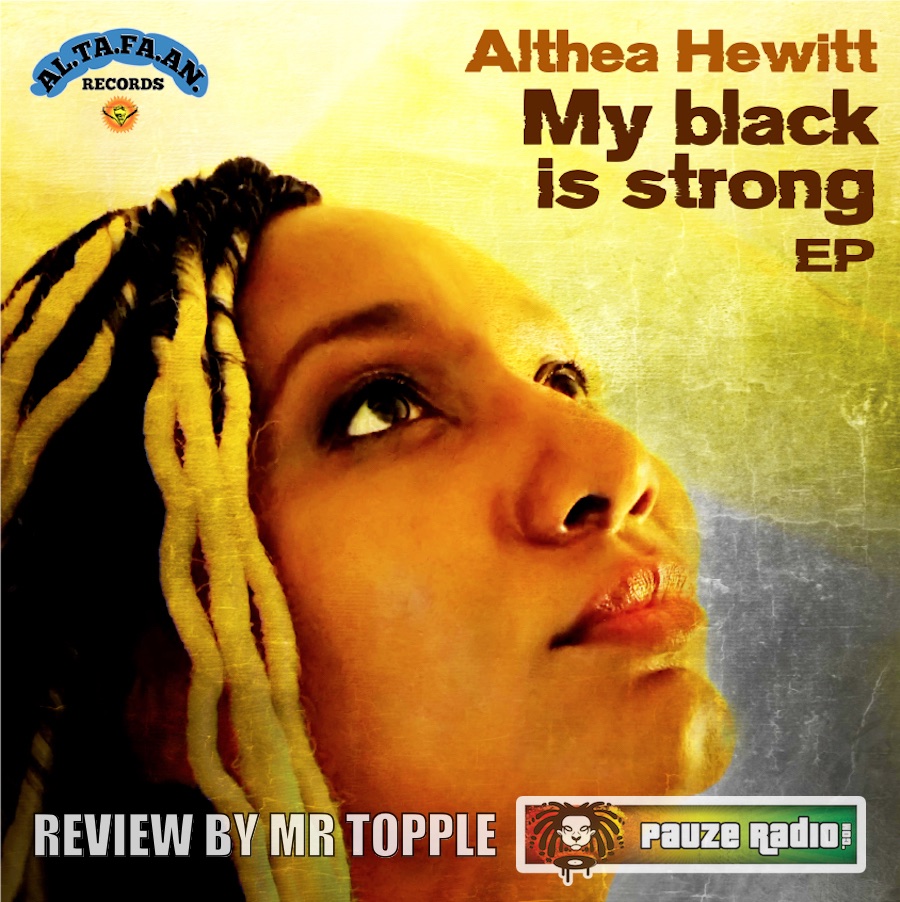 Althea Hewitt: My Black Is Strong EP Review by Mr Topple for Pauzeradio.com.

Could 2021 already have delivered one of the strongest Roots-Soul EP releases of the year? Quite possibly, as Althea Hewitt gives us her offering.

Althea Hewitt My Black Is Strong, released via Al.Ta.Fa.An Records, sees Hewitt and producer Anthony Senior take a deep dive into Soul-influenced Roots – with the extent of the inflections of the former varying. Across six tracks, Hewitt displays her considerable talents for both song writing and performance. And with Senior at the production helm, the quality of the EP is elevated further.

It opens with My Joy. It’s an overly breezy, forthright yet unfussy affair, based around some rudimental Roots devices which are then embellished to create a more soulful sound. The focus here is on the rhythm section. Keys run a very choppy bubble rhythm, heavily staccato with some pleasing embellishment across the treble clef (right hand) – and the guitar marries this with its intermittent skank. Meanwhile, the bass is ostensibly Roots. Fairly picked to create momentum, it runs two different rhythmic arrangements: a drop-beat one which skips the three, and a full-bar arrangement making use of both straight and dotted quavers to create a nice wind. Drums are on a one drop, with the kick and snare focusing on the two and four while hi-hats keep to a fairly strict double time rhythm, with the occasional break out into some dotted notation.

But it’s My Joy’s horns (including a sax) which help elevate the track into something more soulful. Full of swagger and sway, they run responses to Hewitt’s calls across multi-layered harmonies. Sometimes they are staccato and forthright; others smoother and with expressive use of crescendo and decrescendo. Then, there’s some rapid-fire runs thrown in at the end of phrases, too. The guitar joins in with these funky vibes, breaking away from its skank at times and delving deep into some heavily bended, whining riffs with some gorgeous glissando, too. My Joy’s call and response backing vocals embed the Soul vibe. Then, Hewitt’s vocal is suitably joyous – and overall, the track is fresh and funky and sets the Roots-Soul tone of Althea Hewitt My Black Is Strong well.

Next, and Love Heals moves this vibe further forward – seeing Hewitt team up with the legendary Luciano. Rudimentary Roots devices are still present: a bubble rhythm from the keys and an actual one drop on the bass, also present on the drums. The guitar performs its double role of Roots and Funky Soul once more. Horns are once again central – veering from responses to the main melody’s calls and also mimicking it, too. But it’s the additional touches which are really delicious. Love Heal’s electric organ runs a persistent motif: a countermelody which occasionally breaks into runs, dosed with some heavy vibrato across it. The drums do some fleeting, almost Steppers-like frantic riffs and rolls, bringing a sense of urgency to the track. Additional percussion includes some shimmering chimes. But what Hewitt and Senior have also done so cleverly is to base the track in a minor key, which then switches to some major root chords at points. This juxtaposing of a positive message with a traditionally negative musical key works very well. And Hewitt and Luciano are a perfect match. His naturally soulful voice marries perfectly with hers, as they musically bounce off each other exquisitely; the soulful backing vocals finishing off Love Heal’s rich and glossy overall vibe very well. Lovely.

Friend sees My Black Is Strong move into Reggae-Pop territory. While the instrumentation isn’t overly Reggae, there are tinges of it: the electric organ does a half time bubble rhythm, and guitars perform a broken skank. The latter are particularly warm and breezy but also with bend, almost floating from the Caribbean to your ear. Meanwhile, the winding bass is on a drop beat rhythm. Friend’s chord progressions are another nod to the genre; blocks tapping in the background a nod to Africa, but the whole thing has been packaged as more lilting, folksy Pop then Reggae. But then the track I Feel Good takes My Black Is Strong back to basics; shifting the musical emphasis onto Roots/Dub – and cleverly so.

Again, Hewitt and Senior have placed the song in a minor key for a positive subject matter. And it is the overall arrangement which really impresses. There are some basic Roots devices used – namely a guitar’s intricate skank and the keys’ embellished bubble rhythm. The former riffs at points, and what sounds like a clavichord joins in, performing choppy chords and the occasional riff, too. But you cannot get away from a feeling of Dub across the track. The arrangement is sparse, with some pointed breaks. Its bass is persistent across one riff and doesn’t let up, with its engineering making it deep and resonant. Drums, while having an unfussy arrangement, have flashes of something more urgent – not least the snare’s offbeat rim clicks and the hi-hats occasional rolls. Additional samples and a pointed use of reverb compound the feeling of Dub and the overall composition sticks to the mantra ‘less is more’. This allows Hewitt’s compelling vocal, full of musical detail, to soar – showcasing her great improv skills and also impressive range, moving into her soprano head voice with ease. Smart and intuitive.

The EP moves back to Roots-Soul with I Cry Freedom. Co-written with Christopher Galloway, it’s a complex, searing and urgent affair. Keys perform a choppy bubble rhythm, but it’s not as prominent as it is on other tracks. Guitars have been mixed up, here. The skank is messed with, focusing on single chords on the downbeats and additional riffing is brought in, too. I Cry Freedom’s bass line is more detailed, too – doing a drop-beat led phrase which skips the four on the first bar and the one on the second, creating a veritable ‘breath’. Drums are incessant on a one drop, with the occasional flourishes at points. The horns are again responding to calls and a sax is given a free rein to break out further, with a gorgeous solo section as the centrepiece over Hewitt’s spoken word bridge. But it’s Hewitt, Galloway and Senior’s additional instrumentation which is particularly well-placed. There’s a nice use of an electric piano, shrill and high-passed to create an almost 80s throwback vibe. A second guitar line accompanies the bass but on a heavily syncopated riff. An electric organ is also present, running quick riffs just out of earshot. That clavichord-sounding line is also back and overall, I Cry Freedom is a very detailed composition: lots going on and rightly so – as Hewitt delivers perhaps her broadest performance, incorporating delicate then forthright vocals, a poised spoken word section and a brilliant acapella closing – hammering home the pertinent lyrical content. Rousing work from all involved.

Althea Hewitt My Black Is Strong closes with the title track, again with Galloway on co-writing duties. Once more, urgency is key, which marries with the subject matter. But here, there’s something more haunting about it compared to what’s come before it. The instrumentation is stripped back, focusing on a pointed selection of instruments. Stark keys run a basic bubble rhythm, which utilise brief breaks to good effect. The bass is again persistent, but this time hitting every beat. It marries well with the drums which avoid a one drop: the kick hits the downbeats to create a more brooding vibe; the hi-hats are on a non-stop double time rhythm while the snare focuses on the two and four. Occasional rolls across the tom-toms bring light to the shade. Once more the clavichord (or is it a wah-wah’d electric guitar?) is back; coupled with an actual electric guitar running a fascinating triple-beat skank along with riffs. This unfussy arrangement is crucial to the track, as it delivers an unsettling, imposing feel to marry with the serious subject matter. But My Black Is Strong’s arrangement is also powerful. A stark bridge, where the instrumentation is stripped back to just the keys and guitar running a motif, takes you by surprise. And the tracks closing borders on Jazz. Also, throughout there’s a feeling that the track is almost going to trip over, in terms of the rhythmic arrangement feels like it’s nearly running ahead of itself. Hewitt is powerful and robust – and overall, My Black Is Strong is possibly the most powerful track of the EP.

Hewitt is pitch-perfect across the album. Her voice is potent and compelling, immediately grabbing your ear and refusing to let go. It is filled with expressiveness: from her controlled and well-placed use of varying speed vibrato to the light and shade she injects via varying the dynamics, Hewitt’s voice is that of a highly seasoned performer. She has natural, intuitive improvisation skills – drawing on elements of Jazz in the construction. Her range is strong, dipping down into a mid-alto and up to a mid-high soprano with ease, and utilises her head and chest voices for both emotive and technical effect well. All this then combines with her moving lyrical content. Hewitt covers a very broad range of subjects and themes for a six-track EP: from love, commitment and faith to the persecution the system metes out, its divide and conquer tactics and the structural racism that exists because of it. No mean feat – but the thematic content is so well-matched with the music that she carries it off perfectly.

Althea Hewitt My Black Is Strong is a highly accomplished, musically solid and thematically deft piece of work from Hewitt and Senior. The sound is classic yet fresh, with more than enough musical variation across the six tracks to maintain interest. Hewitt delivers a vocal and lyrical tour de force, and the whole thing will surely be on many people’s end-of-year lists of the strongest EPs. Sterling work.