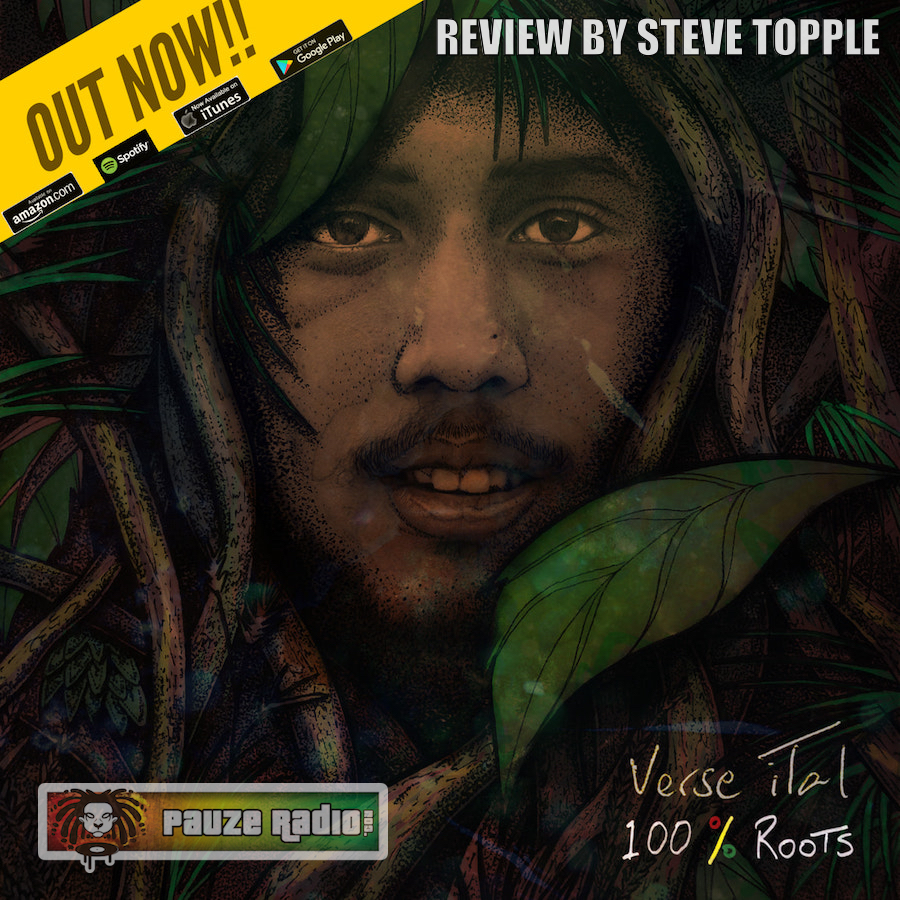 So, I’m a bit behind the times. But often something is so good it’s worth coming back to. And that’s certainly the case with Verse iTal 100% Roots, his 2018 seminal release.

Musically, the album kind-of does what it says on the tin. Lyrically it’s true to its title as well. But it’s Verse iTal’s precocious talent which makes 100% Roots a must-have in anyone’s music collection.

Verse iTal 100% Roots opens with the title track. And it sets the tone for the rest of the project well. A pure Funky Soul bass guitar kicks off proceedings with the slickest of riffs. The track then winds straight into ‘100% Roots’ territory. The keys do a straight bubble rhythm, while a one drop is also present. The bass is syncopated Rocksteady – sometimes imitating the rhythmic pattern of the main vocal line, at others going off and doing its own thing. The addition of a synth harmonica brings an almost rural feel to the track, while an electronic organ adds more Funky Soul. A bit of reverb and synths nod to Dub. So, the whole track is a musical potted history of the development of the genre. And Verse iTal’s delicate yet pointed vocal performance just adds to this.

The rest of the album, while seemingly ‘100% Roots’, is technically more complex than that. Even the on-the-face-of-it-Roots Jah Doh Sleep manages to fit an accordion in. And this diversity sums up the record well.

Betterment errs on the side of Bob Marley’s complex interpretation of the genre. A Rocksteady bass, some funky electric guitars but a lack of horns are all of note. Gospel backing vocals compliment a main melody which is highly syncopated on the verses but tight, rhythmic and almost religious in its chant on the chorus.

Lion Stride and Work As One are musically similar. Verse iTal has given the tracks a slower, smoothed-out feel compared to the other Roots-y tracks. On Lion Stride, while the usual Roots devices are present, it feels more RnB than Reggae. This is helped by the beamed bass line and the less syncopated main melody, which is still littered with some complex vocal runs.

Work As One takes Lion Stride and heads towards Neo Soul. The track has more intricate, almost improvised vocal lines; prominent, uber-cool electric guitars and call and response backing vocals. The bass is a repetitive, Hip Hop-flavoured thing. But the only real Roots device is a one drop. And even that’s not quite sure of itself. Fascinating.

Roots meets Lover’s Rock on One Day Soon. Romantic lyrics? Check. Bubble rhythm? Double check. Ska horns? Check. RnB-driven riffing bass? Check again. Call and response, Gospel-y vocals? You get the idea. But there’s something about One Day Soon which transcends both those genres. The rhythm and phrasing of the main melody along with the engineering almost place it in Ed Sheeran territory. It makes One Day Soon a fascinating Roots/Lover’s Rock/Folk-Pop hybrid.

But, as with many artists, it’s when he branches out into more eclectic territory that Verse iTal’s talent really shines through.

Take the track Ganja Samurai. It’s almost Revival in its composition. A straight-up Hip Hop drum line, heavy on the hi-hats and cymbals, screams ‘Protoje’ at you. But it still hints at a one drop, with the accents on the second and fourth beat. A Hammond organ and the keys battle for dominance, with the latter fixing on a bubble rhythm. Electric guitars skank in the background, while the bass is on a driving, five-note Hip Hop riff. A vocoder even gets a look in, as do synth strings. Verse iTal has littered the track with Hip Hop like breaks, which vary in arrangement and melodic line. His growling, rhythmically furious vocal is the icing on this deliciously versatile cake.

Perhaps the most curiously bold cut is How It Feels. Verse iTal is paying homage to the power of music. And he’s reflected this brilliantly in the composition, by incorporating numerous elements of music related to Reggae. The track opens with synth horns you’d expect to hear in Afrobeats, mixed between smoothly beamed and then offbeat, jittery notation. The keys and the drums enter on a triplet staccato riff, followed by a fourth punch just before the third beat which beams into the fourth. It’s all a bit Marley.

Then, the track kicks in proper and into Roots, with a bubble rhythm and one drop. The bass’s syncopated, incessant riff is more Hip Hop than anything else. But, from 40 seconds the track bridges and suddenly shifts into Dancehall territory. The standard, three beat bass appears and is mimicked by the keys. But this winding interruption is fleeting, as we shift back to Roots again. The Dancehall bridge reappears later, as does the Marley four beat arrangement. Afrobeats, Roots, Marley, Hip Hop and Dancehall in one track? It shouldn’t work. But this is Verse iTal. So, it naturally does. Genius.

Verse iTal 100% Roots concludes with Well Prepared. The track has all of Roots’ trademarks present, and embellishes them further, becoming a sum of the album’s parts. A Hammond organ and proper call and response Gospel backing vocals are prominent. But what’s most noticeable is the instrumentation allows particularly the keys and drums to move away from the Roots’ constraints, becoming a complex, almost Jazzy affair – with run after run and improvisation present.

Verse iTal 100% Roots finishes by moving into Dub territory with two remixes: Dub As 1 and 100% Dub. These cement the album’s broad musical aims perfectly. The whole package is a delectable buffet of Roots-inspired treats. And Verse iTal’s vocal are equally tasty. He effortlessly flips between singjay, Reggae-laced winds, growling soul and almost Mento-chanting. For me, I think we’ve only heard a snapshot of what this talented vocalist is capable of, as 100% Roots doesn’t quite do his voice justice.

But lyrically, Verse iTal has created a finely balanced project. Songs of Praise are notable throughout, as are tracks of self-affirmation. Verse iTal shows his humorous side in Ganja Samurai; his romantic side on One Day Soon, and his love for his art and its spiritual resonance on 100% Roots and How It Feels.

But it’s when Verse iTal delves into more political territory that he really shines. Betterment is a perfect example. He muses on how, despite what the system throws at us, we have to “pressure them” until “we see some… change”. Moreover, its refreshing to hear an artist make a metaphorical ‘call to spiritual arms’, as he muses “Find a righteous cause and make a stand for it; and you ready to risk it all just like Malcolm did…” Amen to that. And Amen to the whole album.

As I said at the start, I’m a bit behind the times with Verse iTal 100% Roots. But the album most certainly isn’t. Verse iTal’s smart, intuitive creation sounds as fresh now as when it was released. It’s this kind of mashing of traditional Roots with up-to-the-minute musical devices which is keeping the genre so fresh. And this album, along with its pertinent themes and messages, is a stellar contribution to the Roots landscape. Verse iTal 100% Roots Review by Steve Topple For Pauzeradio.com (31st January 2020).