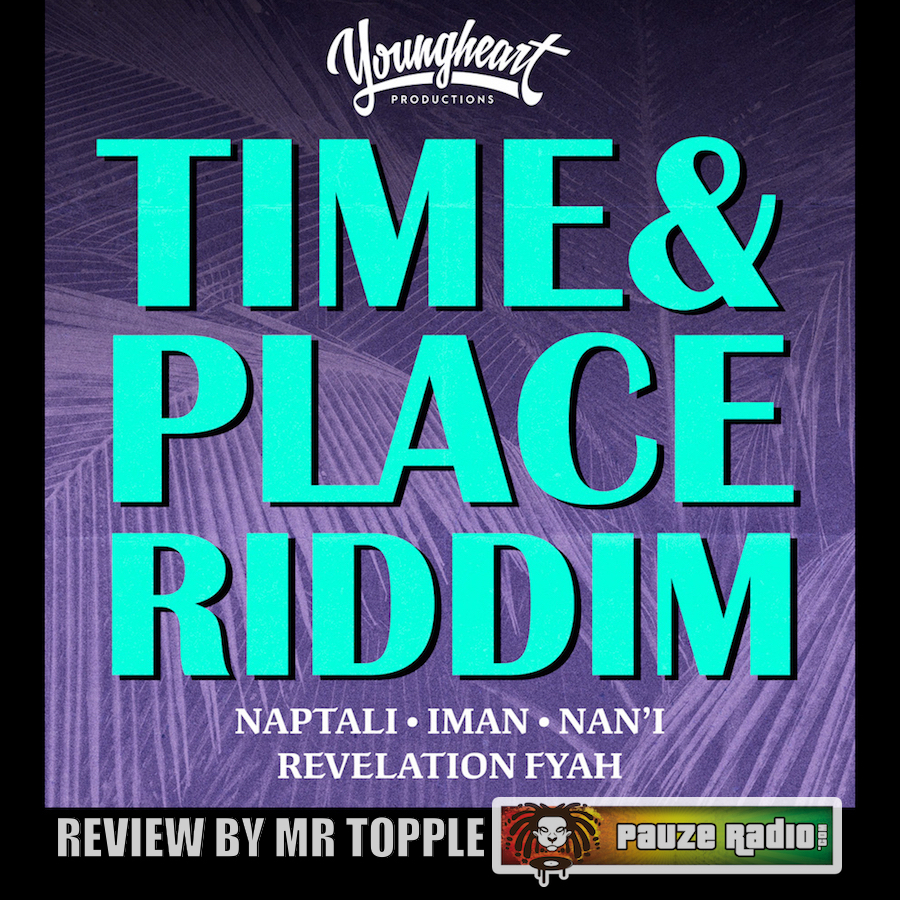 Youngheart Productions is rather like its namesake: young, but equally skilled and up-and-coming. Because the outfit and its founder are releasing a brand-new riddim. And the whole package is a pleasing offering from this burgeoning label.

Time & Place Riddim, released via Youngheart Productions, sees the labels founder Niko Youngheart continue to make his mark on the German Reggae scene. He has a grounding in music, having started playing the trumpet aged 8 and then learning piano, guitar and drums. Around ten years ago, Youngheart began releasing remixes on his Soundcloud channel. Future ventures with Germany’s Sentinel Sound and the Ruff Song Movement Sound System followed.

Now, after drafting a rough copy of Time and Place riddim, he linked up with the artists; got their interpretations and then finalised the composition with Samson Benji on sax and Amzz_Guitzs on guitars. Not to do things by halves, Youngheart got legendary engineer Umberto Echo to do the mixing and mastering. The end result is a cleverly constructed, Roots-driven affair with a grounding in 21st century production.

It’s a breezy, upbeat piece which utilises various Roots musical devices across the basic composition. The rhythm section is key to Time and Place Riddim’s sound. It focuses on a one-drop riff, which uses a mixture of dotted and full quavers – running a melodic line (as opposed to more traditional arpeggio chords). But the bass’s timbre is also crucial. It’s rich and rounded, being played slightly picked to create momentum along with the fairly pacey BPM. Moreover, it’s been engineered to be forward of much of the other instrumentation – making it the riddim’s driving force. Meanwhile, keys run a choppy bubble rhythm, melodically in the mid-to-high range of the treble clef. They barely divert from this, creating some swagger and sway but with occasional riffing flourishes. Then, drums are on a one-drop, too – with the kick and snare focusing on the two and four while hi-hats run quavers. The additional snare rim-click rolls along with the tom-toms create movement across bars. Then, a skanking guitar finishes off Time and Place Riddim’s central composition.

Benji’s sax has been particularly well-arranged. It acts as a counterpoint to each of the vocalists – structured to provide its own melody which often serves as a response to the vocalist’s calls. But what’s also been well-arranged is the layering of the instrumental lines – which has created musical breaks. For example, when the bass drops out, the keys remain and vice-versa. Overall, Time and Place Riddim is an effective and smart composition – which then gives space for the individual artists to do their thing.

Opening the EP is Nan’i with Irie. A relatively new artist (seen on Anotha One Production’s Meditation Riddim), she has a particularly pleasing voice. It sits in the range of a mid-soprano, but interestingly she has the rounded tone more like an alto: clear and resonant and she has a nicely-controlled vibrato, too. Across Irie, Nan’i employs some fairly rapid rhythmic stanzas which she makes cross the boundaries of straight vocal and singjay. This is because while rhythmically her performance is singjay, she employs quite complex melodies more akin to a vocal line. Her tone is fairly forthright, but with flashes of crescendo, decrescendo and dynamic light and shade throughout. Then, Youngheart has messed with the basic riddim somewhat, adding additional Dub breaks to accentuate Nan’i’s vocal. The backing vocals from veteran Fiona Cleary-Forrest are sympathetically arranged and she’s performed them very well. Lyrically, Nan’i’s created a pleasing narrative about singing praises to life, love, Jah and music – and overall, it shows the promise this new artist has.

Next, the more seasoned Naptali gives us the title track. Fresh from his work on Anotha One’s Forgive I Jah Riddim with Luciano, here he showcases his recognisable vocal style more. His voice is very well controlled and fluid – using well-placed note extension. He displays notable breath control throughout as well – carrying fairly long phrases off with ease. He works around the mid-range of his vocal register, creating attractive melodies across a performance which is generally straight vocal. Naptali has offered a counterpoint to Nan’i’s version – as his rhythmic arrangement focuses more on slower notation – but which does build towards the end. Lyrically, it’s a thoughtful and inspiring narrative about maintaining faith, our path and love in the face of Babylon’s system that has always oppressed and abused us. “The war is on” as he laments, but the positivity still exudes, because “Jah-Jah gave us the wings to fly”. Powerful works.

Chicken and Egg Situation comes from German artist Iman. He has a delicate yet engaging voice which is clear and pointed. He sits in a mid-tenor range which he navigates with ease across his straighter vocal performance. Across the verses, he uses both rhythmic and melodic stanzas which he then embellishes creatively according to the lyrics. His performance, while forthright, is not overbearing, which compels you to listen. He has a lovely alveolar trill (the rolling of the letter ‘r’); controlled vibrato and places dynamic variance to fit with his message. Cleary-Forrest once more delivers the good on the backing vocals, too. But it’s Iman’s lyrics which are the highlight of the track. He’s taken a basic idea (which came first – the chicken or the egg?) and turned it into a superb narrative about the pitfalls of living under Babylon’s system and the paradoxes and questions that come with it – littering numerous chicken analogies throughout to excellent effect. Chicken and Egg Situation is really strong, with inspired lyrical content from Iman. Quite brilliant.

Next, and Gambian artist Revelation Fyah delivers Better Days. Here, we move into more soulful territory – as Fyah has a rich, rounded voice focusing on more of a horizontal embouchure (open sound) and with just a hint of pleasing grittiness. His straight vocal sits in an upper tenor, which he uses to create a pleasing chorus and some tightly-delivered backing vocals. His work in creating a bridge is also particularly pleasing. But Fyah also breaks out into a forthright, gravelly singjay at points – creating a lovely juxtaposition against the smoother vocal. He has arranged an attractive melodic line and some decent rhythmic interest. Youngheart has once more added some Dub breaks and also a sudden string line, which is a pleasant surprise. Lyrically, Fyah’s narrative about maintaining faith and hope in the face of the despair that’s found amid the system is thought-provoking and inspiring. Overall, Better Days is a solid piece of work from Fyah – and it shows a voice with real promise.

Finally, Echo delivers the Time and Place Dub. As to be expected from one of the most sought-after engineers around, it’s a slick and cleverly crafted affair – utilising plenty of breaks, compression, decay and reverb to create a stark and somewhat haunting interpretation, despite the major key the music is in. His focus on the sax line is particularly pleasing as is the engineering of the drums. Another great piece of work from Echo.

Overall, Time and Place Riddim is a solid and well-constructed release from Youngheart Productions. Classic in its arrangement, but sounding fresh, the quality is high and all the artists have delivered across the EP. There are some stand out moments – and it will be interesting to see where this up-and-coming label goes next.