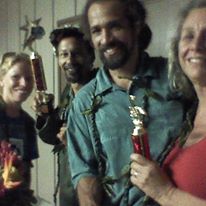 The Selassie Ites band is a cutting edge roots, rock, reggae band, focused on original, positive, spiritual, yet hard hitting and often socio-political lyrics. The Selassie Ites hail from the Big Island of Hawaii, the volcanic inspiration for their song “FIYAH ROCK”.

From the beautiful and lush, yet economically challenged Puna District, the original sounds of the Selassie Ites echo the cries of the poor, the oppressed and the faithful to their groundbreaking sounds influenced by roots reggae, dancehall, rock, blues, hip-hop, and funk, to list a few. The Selassie Ites are a truly homegrown band with humble, family oriented roots grounded in the Rastafari faith.

The Selassie Ites formed together in 2010 practicing in an old converted barn in the rainforest of Hawaiian Acres. The band found it rough getting established in a region filled with talented musicians and a local music culture that seemed not quite ready for their style. The predominant form of reggae in Hawaii at the time known as “Jawaiian” or “island reggae” was very mellow and more like lover’s rock.

The Selassie Ites were coming with much more uptempo rhythms, often interjecting hip-hop/dancehall style chants and rockin’ guitar leads. They also found challenges by focussing on original tunes versus cover tunes, which the latter seemed to be favoured by bar and club owners. Put simply, decent gigs were hard to come by. It was not until The Rastafari Church of Christ’s musical ministry began promoting their own shows through Christmas In July Productions, that the band finally had an opportunity to get some real live exposure. They played their first real show at what would become one of the bands favourite venues, Uncle Robert’s Awa Club in Kaimu – Kalapana.

The band slowly began to gain some recognition and set its’ sights on recording an album. Although their initial efforts never came to fruition, by 2014 with the help of interim bassie/drummer Jahred Namaste, The Selassie Ites finally began the recording of a professionally produced album. By winter of 2015, the album was completed and named “FIYAH ROCK” after the same titled song and inspired by their island home. The album was later nominated for and won Best Reggae album and Album Of The Year at the Big Island Music Awards 2016.

Although the band has gone through many drum and bass changes through the years, their four core original members have remained solid and consists of Johnny “IFAJAH” Edwards on guitar, Shana “Binghi I” Ritzma on percussion and backing vocals; and the band founders and composers Cathy “Sista C” Black and Tyson “Abba T” Black on lead vocals and keyboards. As of 2016 The Selassie Ites have welcomed trap drummer “J Salam” and bassie “Sun House” to the band family. J Salam is from Kohala and has played for years on the Big Island and Oahu with various bands including Kapena. Sun House is from Berkeley Ca. and has played for many years in the Bay Area circuit.

The Selassie Ites band is associated with and sponsored by the Rastafari Church Of Christ’s musical ministry, who’s aim is to use the power of music to uplift and inform the masses via the teachings of His Imperial Majesty Emperor Haile Selassie I and Empress Menen. The Selassie Ites band is on a mission to make you dance and groove to original lyrics and rhythms with a message of Love and Unity.

As of 2016 The Selassie Ites are gearing up to take their music on the road and are making preparations for their second album release coming soon. You can currently find The Selassie Ites releases on I-tunes, CD Baby, Amazon music and other major online digital distribution sources.