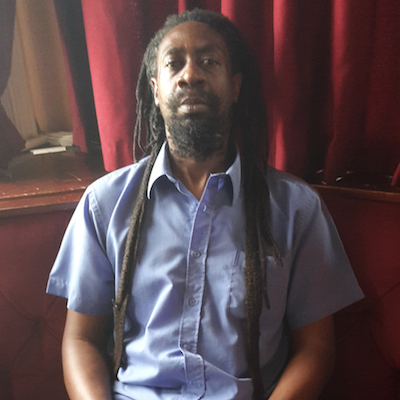 Steve “Stickz” Heyliger is a singer, songwriter, composer and multi instrumentalist with over 30 years of experience in the music industry. Not only is he a great musician but a great tutor and mentor.

He is a member of the PRS, MCPS, and PPL collection agencies and is also a member of he Guild of international songwriters and composers. Stickz became involved in music from an early age, playing the family piano at home and picking up the guitar strumming finding chords and melodies. He is self taught and was soon playing drums in his fathers steel band along with his brother who played bass. He soon joined a band called Vogue who were a young funk outfit that played a few gigs in and around Nottingham he played drums, sang and wrote some songs.

Stickz played alongside bands like Level 42, Shakatak, Lynx, Light Of The World and Beggers & Co. He eventually moved from that band and into 2 reggae bands named Evidence and Humanity respectively, the first band Evidence specialised in Lover’s Rock played at the infamous Ad Lib club in Nottingham, which was a big venue for reggae artists back then.

Stickz had also by this time become a session musician (playing Drums, percussion and keyboards). He played drums for one of the kings of ska Laurel Aitken. He has supported the likes of Gregory Isaacs, Aswad, Don Carlos and more. Stickz is also an accomplished Jingle writer who has composed some top quality Jingles that appear on such stations as RHYTHMflow.net USA, Colin Dales Abstract Dance show, Pauzeradio.com London, and various businesses in & around Nottingham and the UK.

Stickz was also involved in the UK Reggae Sound System explosion of the early 80’s. He was a member of a Sound System called Tumblah Hi Power “The Entertainment Express”. He was also fortunate enough to land a dream gig which was a tour of the UK with an outfit called Subsonic 2 supporting the legendary Salt & Pepa. He also recorded 2 John Peel sessions at radio 1’s Maida vale. Stickz was involved in the live Jazz scene in Nottingham, playing drums and percussion in a band called Flavatasava and sessioning for other artists. He has performed with some major names in the industry and has finally embarked on a long overdue solo career. He composed the music to a track that reached number 23 in the British National Charts in 1999 – 2000 with a UK Garage track entitled I’m Sorry (I Didn’t Know) by Monsta Boy. This track was a smash on the underground garage scene for quite some time and was one of the first UK Garage tracks to be named an anthem of that genre.

Stickz has recorded many different genres of music under many different guises from Soul, RnB, Funk, Reggae, Pop, Techno, House, Jazz, Salsa, Ballads, Electronic, Instrumentals. He recently worked on an album with Benji Webbe of Skindred, entitled “I Haven’t Been Nicking In Ages” and has sessioned on a Dub War track. He is currently working on his own album entitled “Love Light” which is at the mastering stage and will soon be ready for release.