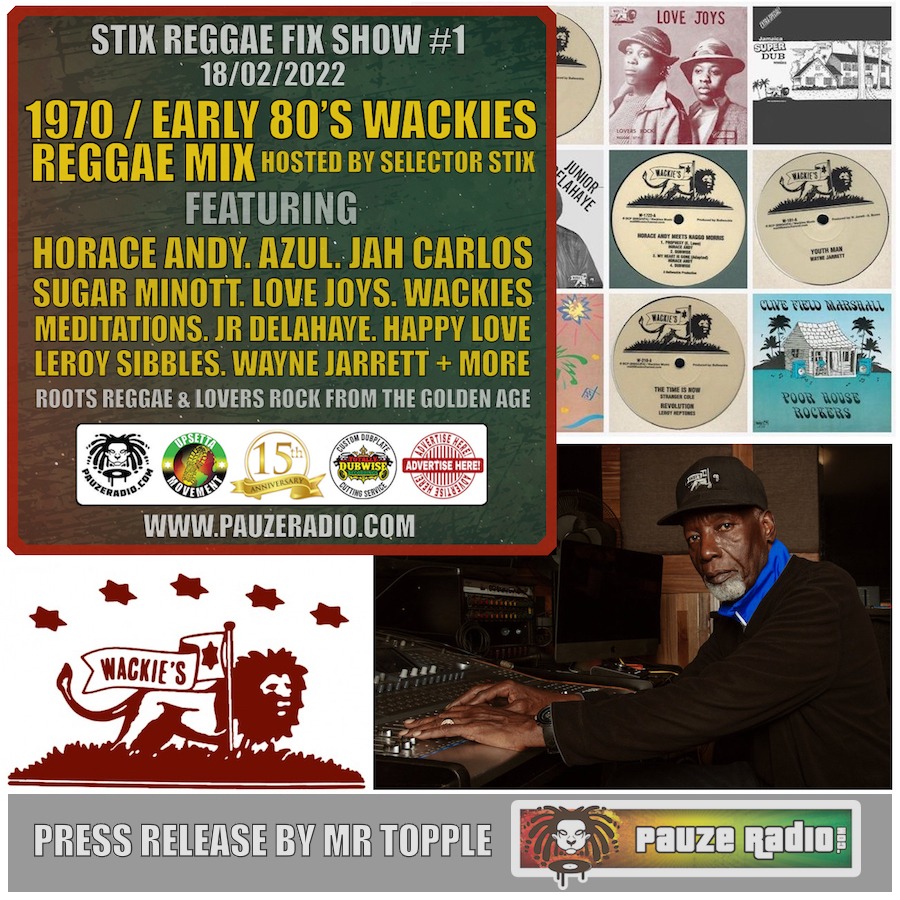 Pauzeradio is excited and humbled to announce that UK-based DJ Selector Stix has joined the outlet. He’ll be delivering brand new shows for the ever-evolving platform at a time when it’s going from strength to strength. Stix will sit alongside Pauzeradio’s founder, DJ Pauze, and music journalist and broadcaster Steve “Mr” Topple.

Stix is now in his fourth decade of DJing – having established himself as a well-known name on the UK and European Reggae scene. Originally from Liverpool, he’s had an eclectic and fascinating career. But his love of the music and culture stretches back to his teenage years. He told Pauzeradio:

“As a young teenager coming from the Punk/New Wave era, I’d always heard and owned Reggae-influenced music: The Clash for example. So, by the age of 17/18 I started listening more. Around that time, what really sealed it for me was going to see Eek-A-Mouse in Liverpool in the early eighties. Hearing the warm up Sound System and how the music sounded on that really caught me. I never really looked back.

After coming down for the London Reggae Sunsplash in 1984/85/86, I made a permanent move to London in 1986 to be close to the Reggae music scene. At that time there were always gigs to attend, specialist record shops, pirate radio, Rodigan on Capital Radio and Tony Williams on BBC Radio London; those stations ceased broadcasting reggae by the late 80’s. So, I caught the end of a golden era for the music in London before other genres took over”.

It was around this time that Stix began DJing. At first, it was a case of him playing tracks at friend’s parties. But soon, more professional work beckoned as a friend at university arranged for Stix to play gigs for the Student Union. The 90s came and went, and Stix work became intermittent as he focused on family life. But by the 2000s he re-approached DJing. Stix told Pauzeradio:
“In the early noughties I got some gigs in Italy and then Berlin. I started doing radio with RJR in 2009 while playing regular gigs in Watford where I live”.

Since then, he’s DJ’d for London Community Radio, The Beat London, hosted weekly shows for the UK and Bermuda, performed numerous live gigs and has his own online streaming shows. And now, he joins Pauzeradio.

Stix will sit alongside DJ Pauze’s Unique Reggae Mix Show as well as the outlet’s music reviews and PR services from Mr Topple. And with Stix (as is always the case with Pauzeradio), you can expect something different – not least with his debut show.

Already, Stix is proving to be producing something quite unique. Wackies records are rare and in high-demand. Moreover, it’s refreshing to see a show focus on earlier Reggae and Dub. But the thinking behind Stix doing this as his debut is fascinating. He told Pauzeradio:

“During lockdown I sorted out my records and rediscovered a set of Wackies releases I had. Some dated back to about 1990 when a friend, who was working in the building trade in the West End, gave me a box of records he’d found in an empty building he was working in. They were all Wackies label and I think the building was their London office during the 80’s heyday. So, those records along with some reissues I’d bought along the way got a lot of play while working at home due to covid in the last two years. They have an almost Black Ark (Lee Perry)-type sound that is still somewhat unique to Wackies. Although Lloyd Barnes (who is Mr Wackies) was a Jamaican in New York, it has a different sound to the Jamaican produced music of the era – especially the early 80’s stuff that is predominant on this show. So, as I’d done no radio shows for 20 months, I wanted to re-start with the Wackies stuff”.

Stix is a natural DJ and selector. His sound and choice of tracks are fluid, thoughtful and entertaining. He seamlessly mixes from track to track with intentional poise – and his first show for Pauzeradio will be the start of a fruitful and unique relationship with the outlet.