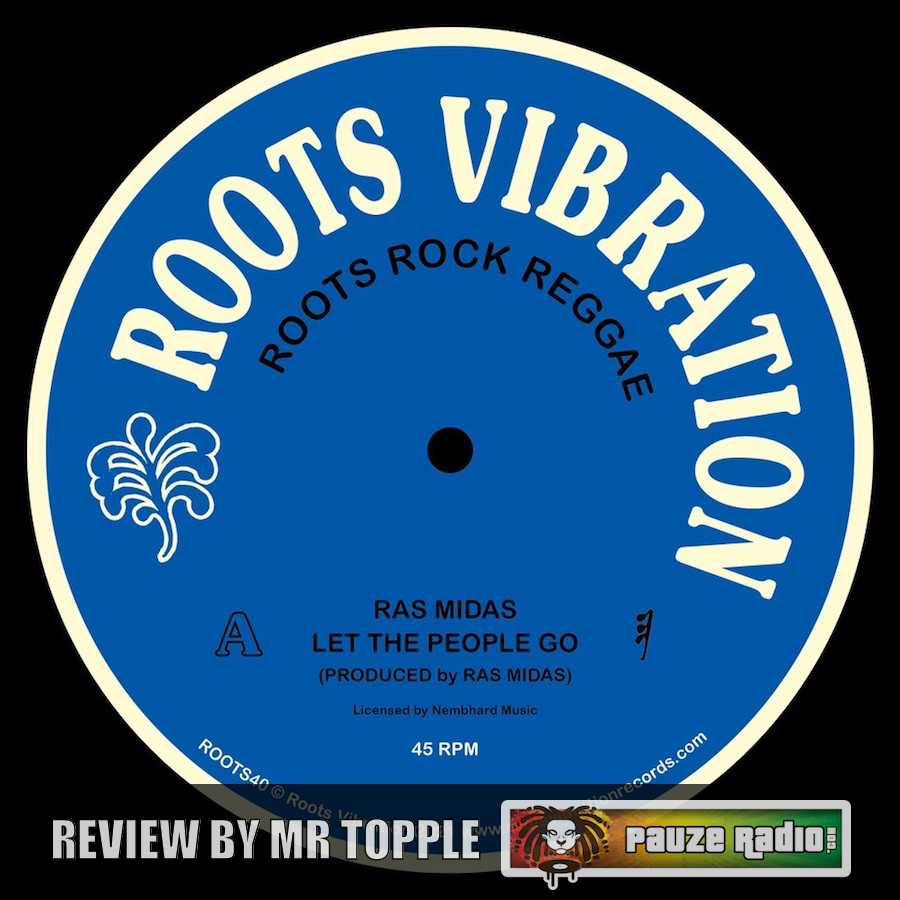 Some classic Ras Midas tracks have been given a 21st century refreshing. And the legendary artist sounds as good as he ever did.

Ras Midas Let the People Go/Rain and Fire, released via Roots Vibration Records, sees Midas at the peak of his powers. With both tracks originally being composed by him, and production from Harry Johnson (along with Midas on Let the People Go), they really are this fine artist in a nutshell.

Let the People Go is pure Roots with elements of Dub weaved throughout. Gladstone “Gladdy” Anderson’s keys run a choppy bubble rhythm, with nicely placed additional riffs at the end of every second bar. Robbie Shakespeare’s bass is on an incessant drop-beat rhythm, syncopated across the first two beats, before skipping the three and coming back with more syncopation across the four. It’s been composed low-down in its register, giving Let the People Go a brooding, unsettling Dub vibe across it. The rhythm guitar picks up on the bass, mimicking it at points but an octave higher. Winston Wright’s organ also follows this lead, using a part of the bass and guitar’s melodic and rhythmic motif (beat four’s sequence), with a pleasing amount of vibrato thrown in for good measure. But it’s the drums and percussion which musically drive the track forward.

Mikey “Boo” Richards’ drums avoid falling into Roots sensibilities – with no one drop in sight. Instead, they’re pacier, almost putting you in mind of Steppers at points with the ‘and-one’ rhythm variations across the kick/snare, with hi-hats moving around the spaces in between. Herman “Bongo Herman” Davis’s eponymous bongos tinker and patter in the background, before breaking out into a rich, syncopated and seemingly improvised solo bridge. Noel “Scully” Sims makes good use of a vibraslap, a very effective slide whistle and what sounds like a shaker just out of earshot. Ras Midas finishes Let the People Go with an engaging performance, in his signature almost improvised combination of soulful vocal and melodic singjay. He runs up and down his register, making good use of varying dynamics (especially higher up his pitch towards the end improv sections) and has crystal clear enunciation. He carries across the impassioned lyrics well – hammering home the message of the desperate need for emancipation with furious urgency, telling us that we have to “set the people free from Babylon brutality”. Use of Dub reverb across his vocal adds to the edginess and overall, Let the People Go is a stark, heartfelt cry of freedom with musical passion to match. There’s also a glorious Dub version which really conveys the intelligence of Midas’s musical arrangement while bringing in variation on the basic structure, too.

Fast forward from Let the People Go’s original 1979 release to 2021 – and the re-mixing and remastering has been done by David Plummer. It’s quite superb. When compared to the original, Plummer has captured the essence of not only the track’s message but also its musical soul as well. The bass has been elevated and cleaned, creating an even more unnerving vibe than the original. The delicate percussive instruments have been brought forward slightly, and Midas’s vocal has taken centre stage. Overall, Plummer has seemed to have low-passed the whole track – creating a rich experience while still leaving that authentic vinyl sound intact. It’s impressive and sympathetic in equal measure.

Next, and we have Rain and Fire. It represents a musical sea change on Let the People Go – slower, somewhat more despondent and fluid, focusing more on Roots but with an intricacy in arrangement. Shakespeare’s bass is more detailed than previously, running around both arpeggio chords and more melodic notation. Its rhythmic patterns vary: at times every beat is hit, with syncopation in between – but on the main phrase it does a big one drop, skipping the four and the following first beat of the bar entirely, creating a huge musical breath. Drums from both Sly Dunbar (of Sly and Robbie fame) and Leroy “Horsemouth” Wallace are more pared back, focusing on an incessant pattern across the main set with noticeable snare rim clicks on the two and four, cementing the more Roots feel. Additional percussion sees the gently pattering bongos return. Keys run a bubble rhythm which have compression and decay across them at times, with the pick guitar from Earl “Chinna” Smith complementing them with a skank. An organ works high up its register, running rapid riffs towards the end of some bars, which flow into the next. There’s also a melodica in the fray, too – at times mimicking the keys bubble rhythm, at others running away with its own melody.

But it’s the sax from Richard “Dirty Harry” Hall and trumpet from Bobby Ellis which make the change from Let the People go more pronounced. They’re central to Rain and Fire: running joint, harmonised riffs which serve as response to the main melody’s calls. Both also branch out into working with the backing vocal line, and then also riffs and runs in their own right. Hall and Ellis are accomplished here – bringing real vocal quality to both instruments, filled with dynamic light and shade and emotive use of vibrato. Then, the backing vocals are quite astonishing – as they’re almost a Who’s Who of Roots royalty: Marcia Griffiths, Rita Marley, Judy Mowatt and The Cables’ Keble Drummond. They’re haunting in both their arrangement and performances, heavily employing effective crescendo and decrescendo, working dual roles of straight harmonic accompaniment and call and response duties. Midas is once more on point: more reserved than on Let the People Go, he still manages to convey his message perfectly: delicately weaving an intricate narrative about the state of the world under Babylon; how the chaos we see before us has often been prophesied and the potential impending doom many are facing – as opposed to the salvation of others. There’s a sense of sadness, not righteousness, here – as Midas laments the predictability of it all as the end times comes to pass. But he brings in elements of hopefulness too, that ‘iron sharpeneth iron’ and many more will be saved. It’s powerful, haunting work from all involved; perhaps the stronger of the two tracks.

Rain and Fire doesn’t need its own Dub version – as around two-thirds of the way through it breaks out into this as part of the main track – seeing much of the instrumentation and vocals being stripped away, and then sporadically brought back in with varying levels of rhythmic reverb across them.

Then, 2021’s re-mixing and remastered is by Belgian talent Equus. Their focus here is on bringing the vocals forward but also enriching them; an important variation as it brings the lyrics fully home. The horns are also moved forward; the melodica is further up and interestingly, the bass feels more pared-back – moving away from the heaviness of the original, brining the higher register, lighter sounds to the fore. But again, Equus has also brought a new richness to the track, while still keeping the vinyl feel. It’s another smart and sympathetic piece of work on Midas’s original.

This 12” release is a must-have for any Roots lover. Ras Midas is of course a legendary artist and Let the People Go and Rain and Fire are perhaps two of his stronger tracks. But the refreshing yet careful remasterings for 2021 elevate both cuts to a whole new level. And overall, this fresh feel coupled with Midas’s timeless performances and lyrics make the release essential listening.