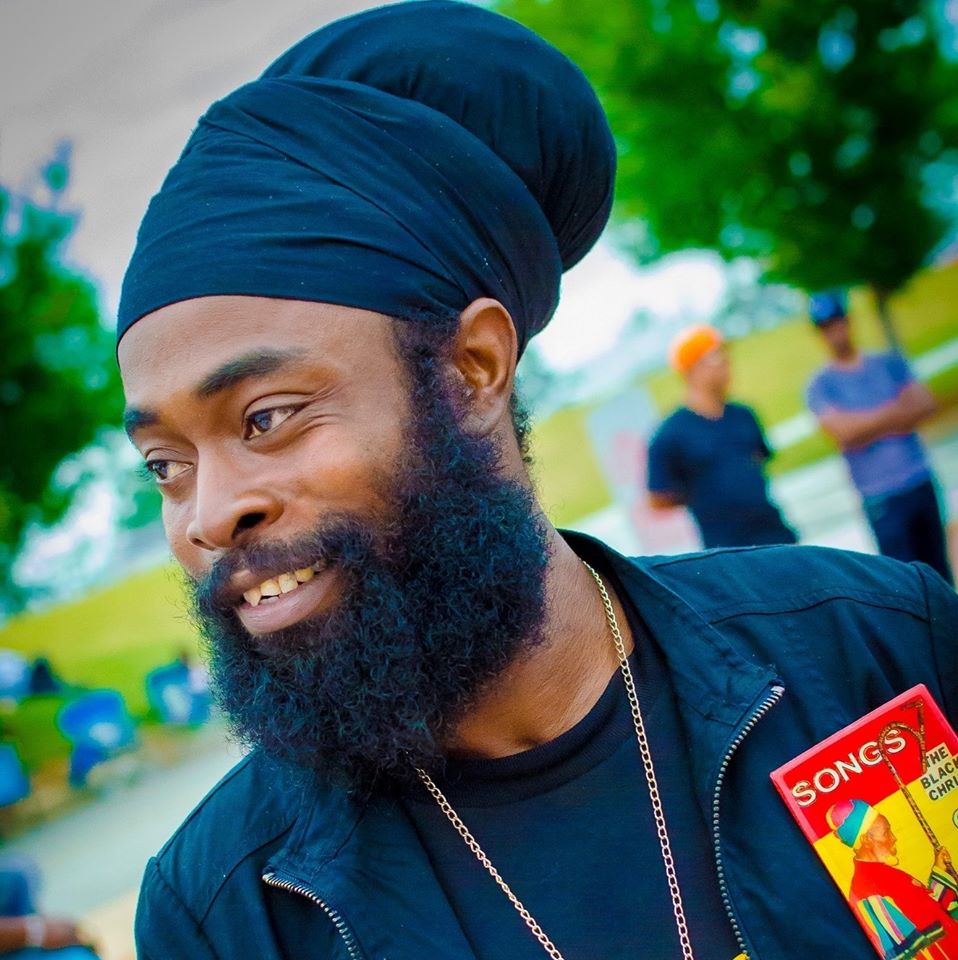 Ras Fraser Jnr. Nestling in the hills of the Cockpit country, in the parish of St. Elizabeth, rests the village of Accompong Town. This unique village was officially established in 1739, on land given to the Maroons, at the end of the first War between the English and the Maroons in Jamaica.

Each year on January 6th, the Maroons celebrate and share some of their cultural traditions, music, dance, drumming and feasting with the wider society. However there are many of their rituals and practices are never shared with outsiders. Ras Fraser Jr. would like to share aspects of his cultural heritage and rites of passage that have, has made him the man of quite, integrity, the real and true Rastafari that he is today.

Jhemel Fraser was born on 5th January 1981, and with the guidance of his grandparents, parents and extended family he grew in love and knowledge. Through regular visits to Accompong Town as a child, he discovered for himself the history and culture of the maroons. His parent’s home in Greenwich Town was alive with the culture and livity of Rastafari; the spirituality and social commentary of the music that was made by his father, the preparation of Ital food, and the book shelves filled with many books of importance to Black people.

In 1988, at the tender age of seven, he made his stage debut with his father, reggae great, Phillip Fraser called him up on the stage at the Fort Clarence beach in Portmore. The crowd were very taken with young Jhemel and today Ras Fraser Jr. recalls that, ‘It feels like it all happened just yesterday.’

Perhaps due to the overwhelming response from the Portmore crowd, Jhemel was asked to perform at, George ‘Father Binns’ Duhaney’s annual show in Greenwich Farm. Aside and apart from his performances young Jhemel was allowed to grow, learn and play as any child and he admits that sometimes, he could ’give trouble’. He loved to play music, sports and games and eventually played football for Excelsior High School pespi under 13 cola’s under 17 and when they won the Manning Cup in 1993. He notes that his major achievement as a child was when he graduated from Primary School, he recalls that he felt so proud of himself that day.

At high school Jhemel began to seriously contemplate the teachings of Rastafari and began to align himself with the teachings of Prince Emmanuel. This seemed natural to him, as within his home environment he had been used to a disciplined lifestyle. When he made the serious decision to wrap his head he knew that would put away childish things. But reason beyond Jhemel control he was not allowed to attend high school, after the tenth grade as at that time in Jamaica, there was no provision for students whose faith dictated that there head should be covered, therefore he did not graduate. Despite the fact he went and purse a trade in auto mechanic.

Ras Fraser Jr. would now focus his studies on the teachings and self-discipline that were necessary to make him the man of quiet integrity that he is today. Many of the original Maroons and Black Africans from West Africa who travelled to Jamaica may have also have wrapped their heads in a similar manner, especially the Marabout or carrier of the knowledge. All those journeys to Accompong town and the times when he would sit in the caves just feeling the vibes from the ancestors would now come forward to new generations through his musical expression. Through the word sound his music brings forth the teaching. From these early performance experiences Ras Fraser Jr. began to develop his musical sensibilities and grew in appreciation of the power of music for communication and upliftment.

Music Career
His career took flight, in 1999, when he wrote and recorded his first single, “No Escape” on the Real Rock rhythm. “Inna the Giddion”, “Fight for” “Gather Around” and “Come, Come, Come Away, followed and in quick succession featuring Phillip Fraser. Ras Fraser Junior’s debut album, “Roots Man Time”, also featuring his father, was also released in 1999 on the Razor Sound label. Ras Fraser Jr. has a single out entitled, “Be Strong” on the Yahbel Label and the Mama Rhythm. He is currently working with the Razor Sound Records label, where his past works has been republished.

As a tribute to those who lost their lives, in the earthquake and ensuing tsunami that devastated parts of Japan in 2011, Ras Fraser Jr. made “World Peace” on the Hustle Rhythm and ‘People of world’ on the Pearl Riddim Rebel Souls label “World Needs Love”, on the Better Life Rhythm Blakspade label. “Rasta man” on the More Love Rhythm. Within the year 2012, Ras Fraser Jr did a song with two time Grammy Artist from Sweden, Money Brothers who also came to Jamaica to record the song and to do a Documentary the title of the song is “Neverous Reaction” it’s also on Money Brothers new album, This Is Where Life Is, they also invited Ras Fraser Jr to Sweden to perform at the album launch, and to do a live performance on T.V both in Sweden and Berlin.

In that same year he meet Sweden rising pop star Elliphant which lead to the recording of a song title Music Is Life in Sweden and from there on things started to blossom, 2013 Elliphant came to Jamaica to shoot the video for music is life with her team. Ras Fraser Jr. carries in his being, the histories of those who came before him. He is a man with a mission to demonstrate a positive direction for the youths, through his music an example.

He states with certainty that, ” Music is my life and it runs true my veins And this is my reality, it provides my spiritual guidance.”
This humble and focused man has a brightness that shines from his soul. He is impeccably attired and presents an aura of calm, unassuming, knowingness. He is true and authentic to his music, fusing the most positive from the lessons and rhythms of the past with a poetic, polyrhythmic phrasing for the future.