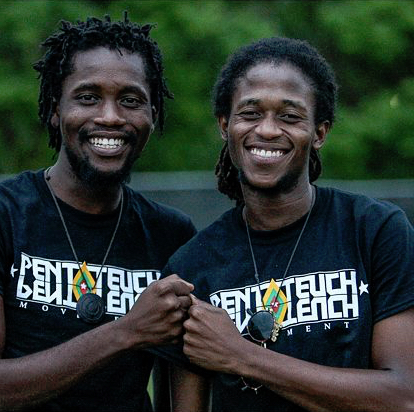 “Pentateuch represents the first five books of the Bible. This movement is a continuation of the journey of Jah people in this generation – the journey to preserve our roots and culture, as we see in Exodus, Movement of Jah people.” As young black men, Kevor and Brady knew that a cohesive voice was necessary to deliver the message of African consciousness and unity.

In 2012, Pentateuch Movement made their mark on the music scene with their first single off their debut album “ The Genesis”. The song encourages people to embrace themselves, to love their skin, their features and their culture. A year later, The movement toured Europe sharing the message music with fans throughout the continent with performances at club shows and major festivals such as Reggae Geel (Belgium), Chiemsee festival (Germany) to name a few.

The desire of the movement was to create a better reality for future generations, which lead them to release their aptly named EP “Chapter V” with a messages reminiscent of reggae’s golden era. Pentateuch Movement’s foundation of unity translates from their daily way of life to their live shows. They have landed performances in Europe, Rebel Salute in Jamaica, Chronixx’ “Captureland” tour and the 2015 Sierra Nevada World Music Festival in Boonville, CA, a notable and critical world stage for new artists to prove themselves.

Pentateuch Movement is moving reggae forward by drawing from African traditions and foundation reggae music. Pentateuch Movement is now gearing up for the release of their new single “Crime” from their upcoming Sophomore album, “Chapter XVIII,” The twelve track Studio album set to be released early 2017.