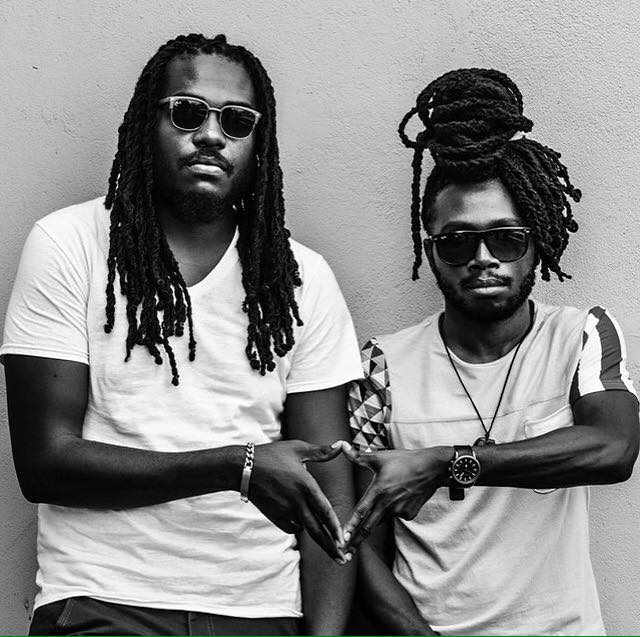 It has been said that to sustain longevity, one has to be able to evolve, and the ‘Reggae Dub’ band Notis Heavyweight Rockaz has been able to do just that. The drum and bass duo comprised by Wayne ‘Unga Barunga’ Thompson and Jason ‘Welsh Bass’ Welsh, was formed in 2014 emerging from a successful music production career as Notice Productions which yielded several chart topping hits.

The Evolution.
Their evolution began in the 1990’s when band members discovered their love for music. However, the drum and bass duo wouldn’t meet until 2003 when they began their tenure at The Edna Manley School of Music in Kingston, Jamaica.

Wayne ‘Unga Barunga’ Thompson
Unga, who hails from Montego Bay, St. James and whose voice is most prominent in the duo chose drums as his weapon of choice early in his life as the attraction to the instrument was almost instinctive. Though he also had experience singing, his passion for drums fueled the decision to pursue formal education to perfect his skills.

Jason ‘Welsh Bass’ Welsh
Even though he dabbled with a few other instruments in earlier years, Welsh, who hails from Highgate, St. Mary, was swooned by his instrument of choice, the bass, as it appealed to his steady temperament. It wasn’t long until he realised he had found his calling when he stepped up to play for his high school choir.

Unga and Welsh, have each also enjoyed major success on tour with artistes such as Jesse Royal, Stephen Marley, Tanya Stephens, Jimmy Cliff and Beres Hammond, however the burning desire was to perform together as a group. This desire began to materialise in 2014 when they did their debut performance as Notis Heavyweight Rockaz at Wickie Wackie Live. Soon after, they released an EP dubbed “New Era Frequency”, a collaborative effort with Australian vocalist Nattali Rize. This then lead them to their first tour of the US which took them to New York City, California, Atlanta and Washington D.C. opening for American rapper, musician and poet, Michael Franti.

In 2015 the duo unleashed their first single which was aptly entitled “Raggy Road”. As told by Unga, the inspiration for this musical piece came naturally as the song is a reflection on the struggles endured throughout their journey and their determination to never give up. The song soon got the attention of BBC 1xtra’s David Rodigan and was featured on the channel during their visit to Jamaica in 2016. A few short weeks later, the official music video was released and featured by Television Jamaica’s most popular entertainment programme ‘Entertainment Report’.

The drum and bass duo has cultivated a unique and distinct sound which stems from the core elements of Reggae music. Their mission is to create music that emits and influences positivity and consciousness with sounds that you don’t just hear but you actually feel, according to Welsh. He also hopes to be able to build a legacy through the music that will transcend generations to come.

Notis Heavyweight Rockaz released their latest single dubbed Upful Movements in July 2016 and is currently in studio composing more music which they hope to release soon, but their focus has not completely shifted as their production arm is continuously turning gears.