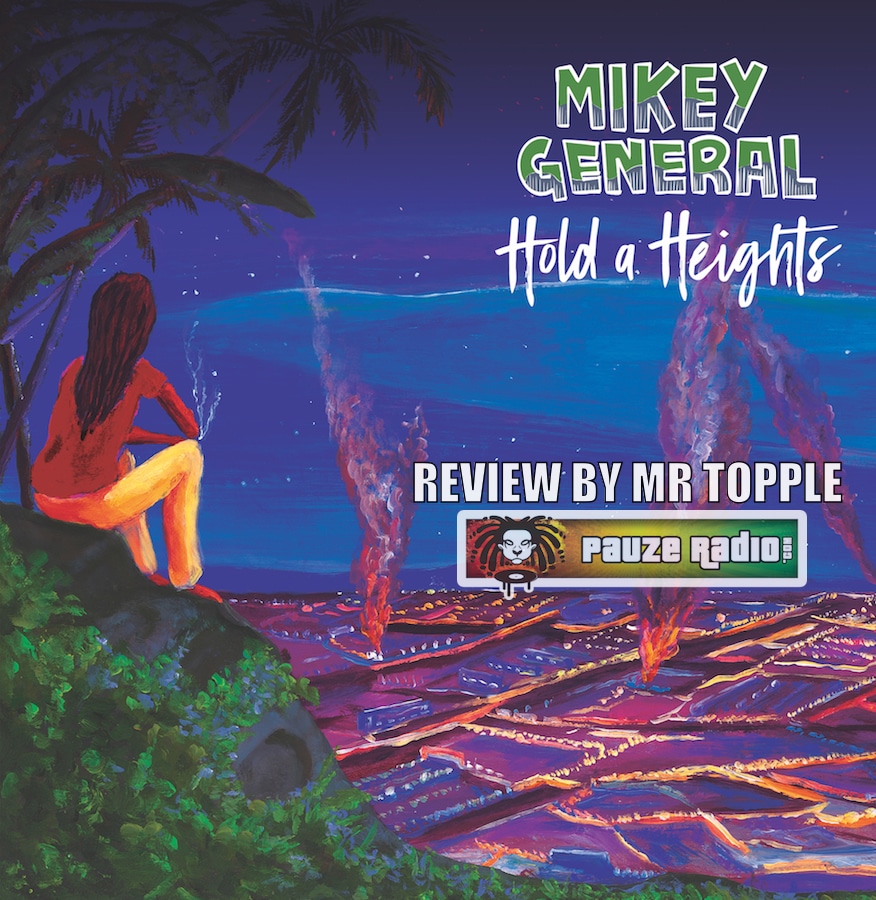 The legendary Mikey General is back with another album – this time heading to new heights in terms of the quality.

Hold A Heights, released via Reality Shock Records, sees General and the label deliver 11 new tracks across this album. Produced by label head Kris Kemist, who also provides some of the instrumental work. The record was mixed and mastered to a very high standard at Reality Shock Studio. Musicians on the release include the renowned Horseman, Patrick Williamson, Ray Carless, Booom Hornz and legendary guitarist Earl ‘Chinna’ Smith. The backing vocals across the album from Indra Rudder are extremely skilled and to be commended.

The thrust of the album is of course Roots. The tracks are laced with keys running choppy bubble rhythms, bass lines on winding, drop-beat rhythms and the drums invariably on variations of a one drop. While this keeps the sound authentic, what the team have done so well across all the tracks is to bring in intricate detail – so the sound is never the same.

Hold A Heights sees Roots sensibilities meet swaying, Soul-laced influences. The choppy bubble rhythm, bass (which is on a two-beat drop rhythm) and drums (with some pleasing hi-hat brushing) are complemented by whining electric guitars which evoke the breezy, high-up lyrical content. They riff and run with a rasping quality, evoking the message well and feel very soulful. Another funkier guitar line also runs riffs; some nice percussive touches like a vibraslap bring interest and Rudder’s backing vocals are on-point – the perfect, soulful mix of straight harmonisation and call and response. General is at the peak of his powers – delivering a rasping, nasal vocal high up his register with a forthright delivery to match his lyrical content: telling Babylon it can throw what it wants at him because he’s high ‘up in the hills’. Stirring work.

Integrity takes the Roots vibes and mixes them up more. Here, the bass doesn’t miss a beat and the drums are more syncopated with the hi-hats doing a more rapid pattern. This and the bass mean Integrity feels forward-moving, despite the relatively slow BPM. But we also take a trip to something away from Jamaica. A lilting acoustic guitar runs Afrobeats-style riffs, frantically running around the track. The percussion is well-executed, including a vibraslap making a return, bongos, shaker and tambourine. Rudder’s backing vocals are often based around vowel-sounds – and the overall composition feels like Roots meets the Motherland. General changes tack, here – delivering a more pared-back and humble performance to match the lyrical content about personal faith and values. Lovely work.

Loyalty returns to something more soulful – but this time veering towards the Funky end of the genre. An electric organ comes in running a half-time bubble rhythm with some decent vibrato across it. Skanking electric guitars break out into funky riffs at points – which are then complemented by the swaying horn section, which is forthright and funky again. The drums are more syncopated, with good use of cymbals and the additional percussion including chimes enhances that funky feel. Rudder’s stuttering, sharp backing vocals are perfect. And finally, General’s vocal is wry, pointed and unrelenting about Babylon’s fakery – with some good call and response work which shows of his ability to do Soulful improvised yet complex riffs and runs. “All about the glamour and the glitter” matches the musical content perfectly.

Revolution featuring No Maddz takes things back to something more traditional Roots. The arrangement is filled with swaying call and response horns (which nicely do a bubble rhythm at points) and there’s a heavy focus on legato hi-hat beats as opposed to the usual staccato technique. Chimes are back; there are pattering bongos and the bridge with the horns and Rudder’s backing vocals taking centre stage is glorious. But the stripped back arrangement works well because it gives General and Maddz the chance to shine. They work very well together – complementing each other’s varying vocal styles and feeding off each other as they dissect the need to challenge Babylon’s system – because if we don’t, who will start the ‘revolution’?

Praise HIM is stripped-back Roots with elements of Dub – with the focus on the rhythm section: bass, keys and drums with horns popping in and out. But then what’s been done so well is the flashes of detail. An electric organ replaces the keys at points to do the bubble rhythm. Synth strings slide in and out across elongated notes, brining something ethereal into play. There’s a brilliant use of a theremin effect, giving a haunting feeling often seen in Revival Reggae. The vibraslap is still there; Dub engineering including rhythmic reverb works really well and General is emphatic as he sings praises to Jah. Glorious.

Can’t Leave It Alone slows the pace down somewhat, returning the sound to authentic, classic Roots. Call and response horns interplay with Rudder’s vowel-based backing vocals. There’s good use of an acoustic guitar, lilting around the track. But once more, there are additional details. The drums are very syncopated, particularly the demisemiquavers on the hi-hats – giving spikes of urgency to the sound – and the rolling tom-toms and clashing cymbals. There’s a glorious electric organ, running shrill riffs high up the treble clef. And General is passionate and evocative – discussing his positive thoughts on cannabis in a soulful and fluid way. The next track, Love, continues along this path – but with some very attractive chord progressions coupled with General’s endearing and impassioned performance about how love is effectively all we need. He returns once more to doing call and response lines as well – and it’s overall a well-executed track.

Get It Off Your Chest takes the Roots vibes, adds in some swaying Soul and then turns out to be a Lover’s Rock cut. There’s a glorious electric piano line with in this, that moves around chords across semibreves and brings something delicate to the forward-moving Roots vibes. The electric guitars are funky, while drums are more pared back then previously seen. The bass returns to a drop-beat rhythm and there some good use of breaks and layering of instruments. General has done a great job with the vocals – here using both a second call and response line as well as MTR plus doing the backing vocals.

Nah Stop Sing is a curious incarnation of Roots – not least because the basic rhythm across it is something nearer slow Afrobeats with inflections of Soul. So, it’s not really Roots at all – even though the instrumentation is that. The guitar line with its dotted note rhythm is central, as are the laid-back drums and weaving bass line. Carless’s sax line is wonderful: filled with vocal-like dynamics and vibrato as well as glorious melodies and improv. The chord progressions add to the mellow vibes, as does the additional percussion. General is strong here – showing his vocal prowess in terms of long note extensions (and therefore good breath control) and a joyful, endearing performance coupled with his lyrics praising life. The next track, Call Jah Name, then switches the vibes back to Roots – with the theremin making a return, being an effective second vocal line at points.

Hold A Heights closes with Look Within, featuring Yared, takes the album to an African-influenced Soul sound – like Nah Stop Sing, with a stuttering main rhythm that’s nearer Afrobeats. It’s mellow, warm and expressive – as multi-layered percussion winds around the underlying rhythm section while Carless’s sax makes a welcome return, offering a countermelody to General’s main one. The chord progressions are complex and pleasing, bringing interest. Rudder’s backing vocals are wonderful – rich and perfectly performed, with a brief solo section too. And General on this last cut shows a slightly different side. His performance is compelling and is almost a plea to us to find Jah. Yared complements this with a rapid-fire singjay which is technically on-point and aurally pleasing. All this leaves Look Within as an emotive and engaging end to the album.

Overall, Hold A Heights is a powerful release from General, Reality Shock and all involved. It’s top-quality artistry on display – shown in the attention to detail with the compositions and General’s passionate, technically brilliant and engaging performances. Another quality release and one for any collection. 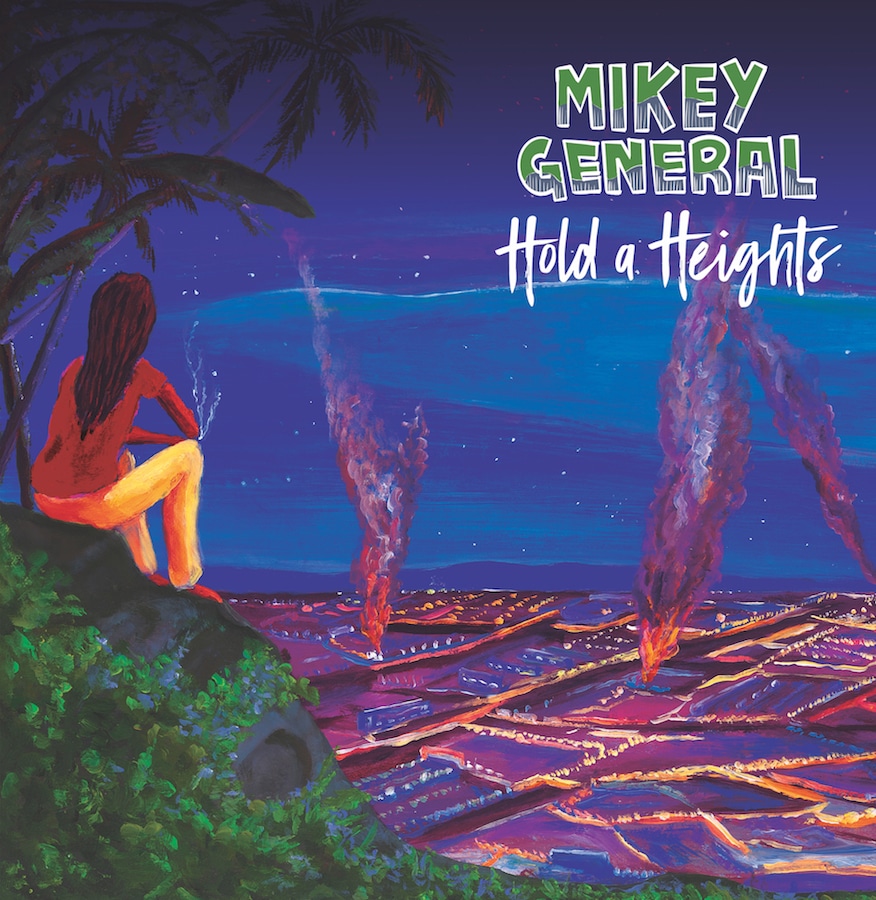