When it comes to unique sounding veteran artists Mikey General stands out from the pick, his individual sound and spiritual messages make him one to listen to. With a long spanning career and many songs and albums under his belt, British born Michael Taylor had relocated back to Jamaica when he was only two years old in 1965. Signs that Michael was a natural with a microphone and performing had started not long after this move, imitating songs on the radio and TV. The first recognition started when singing in school and the church choir.

At 16 years old he started working with big Kingston sound systems like Killamanjaro and later becoming good friends and working closely with Phillip “Fattis’ Burrell and his Xterminator Crew. Many associate Mikey with Luciano and they did meet as far back as 1993, for the first time at Castro Browns “New Name Studio” and both Mikey and Luciano did not just become friends, they also became in house artists with Fattis. Mikey’s natural talent with singing and performing should not be missed though as I know some do overlook his works because of the association with Luciano. Out of the many album releases over the decades two of my favourite albums are Spiritual Revolution and the powerful album Exalt Jah. Also Red Gold Green, Stronger Rastaman and I’m Just A Rastaman are all worth a listen and are a worthwhile addition to all Reggae Lovers archives.

Mikey had contacted me to ask if he could come to the Pauzeradio.com studio to drop a copy of “African Story African Glory” so that I could have a listen and feature in the radio shows. I did not hesitate a moment to take him up on this offer and on the 6th Anniversary of the Unique Reggae Mix Show, Mikey General visited the studio and finally we met for the first time. This added to the excitement when listening to the album. I must say not only was I happy to meet, as I am with all artists and listeners alike, but also having a hard copy of a cd in hand is so much more satisfying than being sent an mp3. Not only that but the quality of the cd I could see right from when Mikey took it out of the bag along with a poster.

Already hyped I waited until the evening to give it a pre-listen before reviewing and here are my thoughts. This brand new album “African Story African Glory” starts with “Unbelievable” and what a way to start, definitely one of my favourites off this album. This song blesses us with good vibes and smooth silky vocals, pleasing to the ear, mind and soul. The deep penetrating lyrics are soothing and when combined with a very tight and crisp musical riddim it creates a hit song, this I am sure will have a big impact on all that listen. Moving onto the second song of the album Mikey joins forces with Toussaint to bring us a powerful educating song by the name of “I Blaze”. This classic sounding roots style riddim fits real nice and the message of the song is sure to clear up the confusion there seems to be in the world on this subject, which is quite clear from the title. The vocal performances from both artists are solid and make for a great combination, both artists complimenting each others sound. The lyrics just flow and the hook lines will catch your ears, which helps absorb the truth in the message.

When reading the track list and seeing “Myspace” I was a bit apprehensive as to what this song was about as I have heard “Myspace” songs before and was not impressed by them. When hearing this song I was pleasantly surprised though, it has a very clever structure. Not only are the vocals and range of vocals very catchy but the riddim is just the same. A mellow beat, again very musical. Catchy hooks and choruses touching on important issues of life now. “African Story” steps up the pace a little with a thumping, bass driven, strong roots riddim track accompanied by more tight and on point vocals from Mikey. This tracks main message hits home reminding us of our roots. Nothing but truth through and through. The Lyrics, vocals and strong riddim hypnotises us into listening and taking in the meaning and message of this deep and powerful song.

Excited about the rest of this journey I pressed play on “One Bright Day”. Another solid sweet sounding roots riddim that is really easy on our ears, combined with a great flowing performance. This song highlights Mikey’s true vocal capabilities. Very uplifting, smooth flowing lyrics mixed with more catchy hooks and harmonies that give a lot of depth. I am sure you will have similar thoughts upon listening to “African Story African Glory” and “Guide Me” just adds to the quality of this album. Its classic upbeat riddim, deep powerful bass line, real creamy vocals and rounding it off with crisp production, make it all round a solid tune, very impressive and more importantly keeping the album consistent. “Streets Of Glory” takes us down a notch, slowing down the pace of the album a little. Yet again another powerful song Mikey is giving us, not just power with the lyrics but the riddim accompanying fit perfectly together. “Innocent Blood” continues the high standards, with its steady roots riddim and a very important theme combine together making this another hit tune.

I knew that this album had an element of Lovers to it before listening and “Empress” flips the script to this side of Mikey, with one for the ladies. This song is very well thought out and expertly produced, the vocals and lyrics are real and as the rest of the album ooze quality. The riddim, as like most on this album, compliments the vocals, another one of my favourites. Keeping the love theme in mind “Yene Mar” featuring Lutan Fyah, is the second combination on the album, another song for the ladies. The strong, sincere lyrics echo power and stick in the mind which makes the solid performances from both Mikey and Lutan stand out even more, great song and completing another big tune for this compilation.

“Not Impossible” picks up the pace again, this time for all the Dancehall lovers. Mikey switches it with a natural sounding, musical dancehall riddim. Not one of my favourites, as I prefer the roots riddim, but the lyrical content in this is very uplifting and reassuring. A great song for the Dancehall fans and showing that Mikey can deliver his message in a versatile manor on any style of riddim. “All Over The World” featuring Ifa Tunde, another song with pace, this song carries an important message to the listeners worldwide, just as the whole of “African Story African Glory”. While these two artists make for a good combination, however it is not the best song on this album simply because the riddim is a bit weak but the vocal performance and the lyrical content make up for that.

“Take Me Away” is reverting the pace down a notch. This beautiful song has an intriguing riddim. Perfect for the content and matches the lyrics keeping our ears listening to Mikey’s message. This is a big song not just because of the lyrics but in the deliverance of them, which is echoed through out the whole of the album. “Don’t Stress Yourself” rolls out on a progressive roots riddim, sweet flowing. It’s good to hear a song with stress as the theme, more artists need to highlight it. Stress is one of the number one killers in this world so when rushing round in daily life, take time to listen to this song as it highlights the damage we can do when stressing and also that stress can kill, which it can! Everyone can relate to this in some form. Deep song again and Mikey drops it in fine style. Tight production, lyrical content A+++, vocal delivery A+++ and another of my firm favourites from this album.

Rounding up the journey with “Pep In Your Step” a great tune to complete the album with. Even though I thought this song could be a little bit longer than two minutes, it’s still a very good song. Slow paced riddim that has a bounce to it while keeping things mellow to the very last second of “African Story African Glory”.

My top 5 songs from this album are:

To summarise “African Story African Glory” I have to say it is a brilliant album, it covers the full spectrum of Reggae; Roots & Culture, Lovers, Dancehall. The production on a whole is of a very high standard, with the exception of the one weak riddim track. The songs have great, powerful drive and important lyrical content with deep, real life, uplifting messages. The on point vocal performances help sum up the whole album as a quality piece of work. There is one song that could have been made better simply by the choice of riddim, but that does not effect this album in making it into one of my favourite albums of this year. Also something which is really good to see is a hard plastic cd case, simple and subtle artwork in the cd sleeve, very effective. A worthwhile addition to the Pauzeradio.com cd archive. This album is certainly setting the standards really high for others to follow. 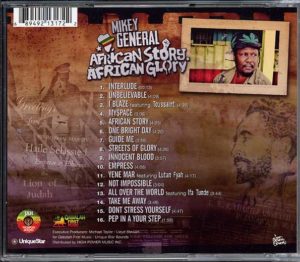