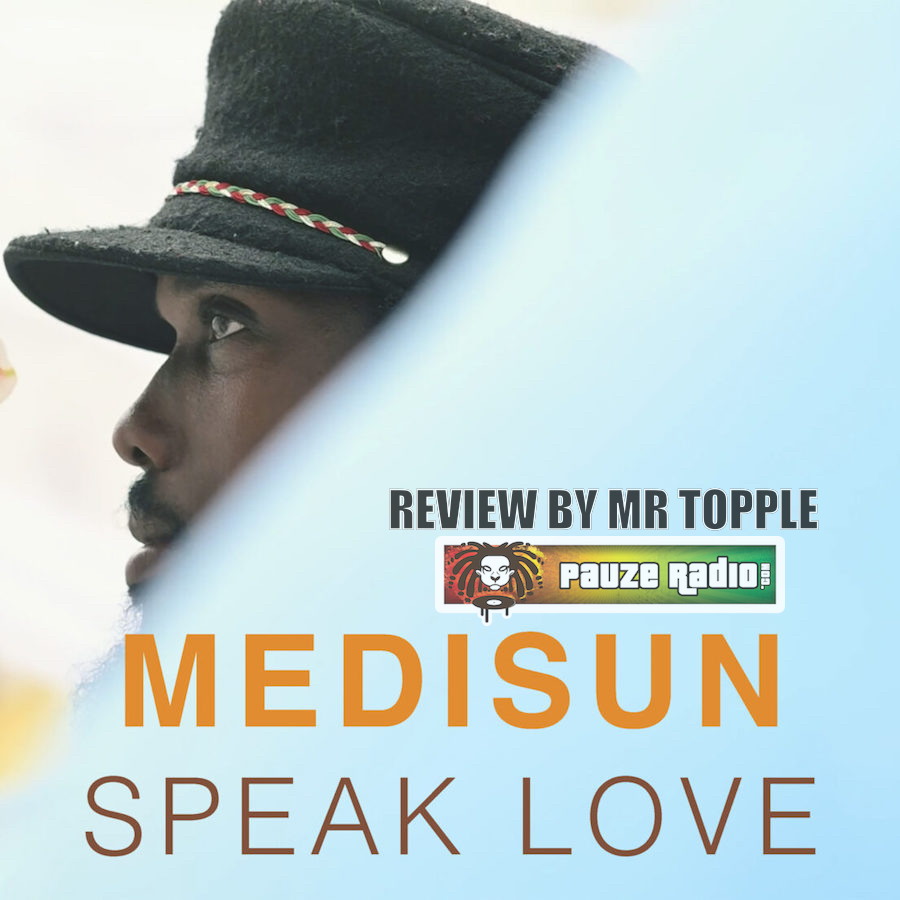 The recently-born MediSun meets Zion I Kings with his latest track. And if you think that sounds like a dream combination, then you’d be correct. Because the end result is gorgeous.

MediSun Speak Love, released via Lustre Kings Productions, is the epitome of modern conscious music. There’s no need to discuss the production, mixing and mastering quality – because it’s Zion I Kings; so – ‘nuff said’. MediSun noted of the track:

“The entire world was in the midst of the traumatic events of 2020 and I was facing a very tense period in my personal life. In spite of the discomfort I was experiencing, I felt inspired to send a healing wave of sound into Iration and uplift the collective psyche of the planet. The therapeutic use of sound is the driving force behind all of the works, or bodies of work, on the horizon. Words can harm, deceive, divide, and destroy. They can also heal, enlighten, unite, and create. I aim to encourage people to choose the latter when speaking to self or others”.

Overall, Speak Love is perhaps best described as 21st century Neo Soul: not to box it in, but to understand that MediSun and Zion I Kings have fused various styles and genres together to create a thoroughly impressive sound.

It’s overly Soul in many respects. The late, sorely missed Andrew “Drew Keys” Stoch plays a major part in this. His gently flowing piano line weaves itself in and out, running chords high up the treble clef on the first beat of some bars – before breaking out into delicate, diatonic riffs that wash across the track through the right input. Stoch is also responsible for the Rhodes piano and the string arrangement, which is enchanting (a frequent feature of his work overall). Less is more with the arrangement, as they flow around Speak Love creating an ethereal feel. The combination of these three instruments and Stoch’s performance give the track graceful otherworldliness – cemented by Laurent “Tippy I” Alfred’s organ running vibrato’d chords gracefully throughout.

Then, Teflon Zincfence and Andrew “Moon” Bain (whose own album drops on 27 August) have arranged the drums. Here, the style is more Hip Hop, but the Funky Soul-influenced variety of the late 90s. The kick is the dominant force in this. It performs that classic ‘one-and-twooo-[three]-and-a-fourrr’ arrangement which is pure throwback. As a rule, the snare then accentuates the two and four as well – while hi-hats hit three semiquavers starting on those beats, eventually broadening out to fill in additional space in between their counterparts with relentless quavers. This slightly driving arrangement cements the fusing of genres across Speak Love: Soul meets Hip Hop, encapsulated.

But interestingly, David “Jah David” Goldfine’s bass kind-of draws on Roots in its arrangement. It performs an extended one drop in the most part: skipping beats one and two entirely, coming in just before beat three on the first bar of its phrase, and just after on the second. Running its own countermelody to the main one, Goldfine’s style is smooth but still slightly picked – accentuating the drum’s momentum. His kette drum also brings in Roots flavour, pattering at times through the left input. Then, multiple guitars lines provide both rhythmic intricacy and forward momentum too – again, merging genres (one doing part of a Roots skank, another performing whining riffs a la Funky Soul).

He is, of course, superb throughout. MediSun has one of the few instantly recognisable voices in modern Roots-derived music – and her he uses its instrument to its full capabilities. His voice is an inherently soulful one: rich and rounded, with a leaning towards a vertical embouchure. MediSun sits in a tenor range – effortlessly gliding up to its top and then beyond into a delicate falsetto, before swooping down at points into an upper baritone. He switches (at points rapidly) between straight vocal and singjay with ease. The latter is particularly well-showcased on a bridge two-thirds of the way through, where MediSun takes a basic rhythmic stanza and then embellishes it. What also stands out is his use of harmonies across the backing vocals: intricate, rich and extremely well-placed to accentuate particular phrases of the lyrics. He also has a knack for beautiful melodic composition – making good use of rising and falling arrangements across the scale which again marry with the lyrics.

Thematically, MediSun has delivered a potent and much-needed narrative around the power of language and speech but also the dangers of it when our mouths and thoughts stray into toxic territory. As he notes: “remember the words can be lethal weapons, and a statement is a lifetime sentence”. His lesson that we as fellow humans should speak with words that empower, empathise and ultimately express love regardless of our differences, is perhaps all the more pertinent in the age of social media where words appear ten-a-penny but 240 characters can change someone’s life. Moreover, MediSun delivers a message that despite whatever violence the system metes out to us, encouraging similar violence via our words and deeds won’t end well. As he notes: “if we not show them how fi love the youths they end up fi destruction”. “It’s not too late to care”, he muses – and there’s perhaps a lesson in here for many of us.

The video, directed by SAMO and Fernando Hevia, is equally impressive. Featuring Nadia Harris Mcanuff it’s filled with symbolic imagery. For example, the aerial shot of Mcanuff dressed in white but asleep on a red cloth is a visual allegory to the police murder of Breonna Taylor. The near-omnipresent lily could well be a symbol of love – encased in Mcanuff’s mouth at one point before being held by MediSun the next. The video a fascinating piece of visual art which needs several viewings to fully appreciate.

Overall, Speak Love is utterly gorgeous and spellbinding. MediSun’s voice is one of the best to emerge in recent years; him and Zion I Kings have produced a thing of musical beauty; lyrically it’s empowering yet calming, thought-provoking and moving – and the track is perhaps one of the stronger fusion offerings of 2021 so far.