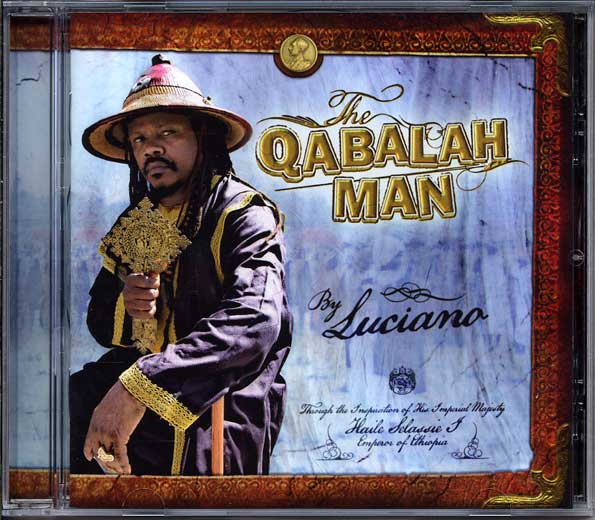 Luciano’s career that has been incredibly successful with a number of albums that are today regarded as modern classics. Over the years he has shared his love for Rastafari, peace, unity and love over beautiful and soulful reggae riddims, provided by some of the best producers around. The Qabalah Man, Luciano aims to tell the world that the journey continues. No matter what’s happening in the world we stand our ground and do our best to maintain our consciousness.

DJ Pauze aka Gav Pauze says….
There has been and is some great reggae music being released in this last quarter of 2013. ”The Qabalah Man” Luciano’s latest studio album has been causing quite an online frenzy of excitement before it’s even released! The album cover seemed to have gone viral on Facebook the past couple of weeks as well, so the anticipation for this was high and of course I was expecting it to be really good quality and content.

Whilst being laid back and positive, it was not exactly what I expected, one of the cleverest songs I thought was “Dis Yah Reggae Music” featuring Vido where Luciano rides the riddim DJ style in reply to the new comer Vido’s tight and steady toasting, really loved that.

I was not disappointed with the overall album but something that I did notice was that a few of the songs had already been featured in the Unique Reggae Mix Show over the summer months, it would have been nice to hear Luciano on some exclusive riddims, beats that I was not familiar with but this did not effect the overall quality of the works.

While this album is very good and worth purchasing, there has been some good album releases this year making for some tough competition but due to the lack of variety of new and exclusive riddim tracks I would put this in the bottom end of my top 10 albums for 2013.

Luciano delivers a great positive message in his music as always covering all sides of life, spiritually, religiously in an uplifting and positive driving manor fixing his lyrics into our minds. The production of “The Qabalah Man” is to a top standard, look forward to buying my copy on CD and lets hope that good music like this starts appearing on Vinyl for all us record lovers.