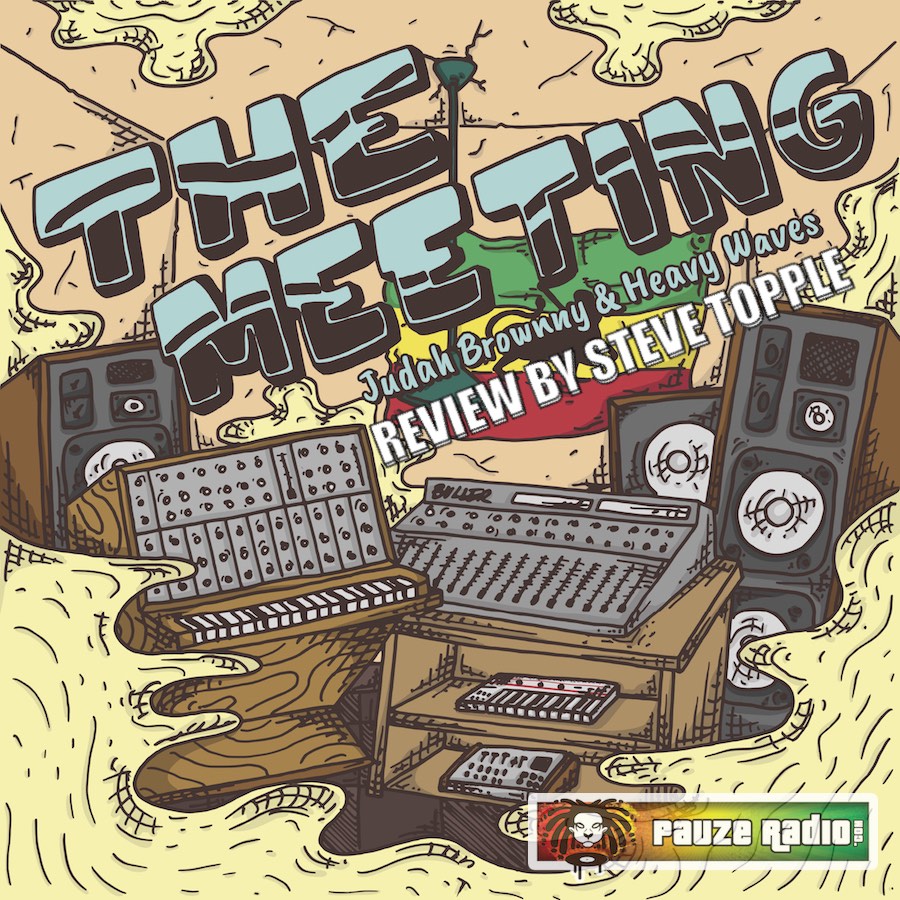 Sometimes there’s nothing better than infectious, bass-driven Dub. But with a market currently saturated with Roots, Dancehall and Afrobeats – where to look for it? Well, you won’t go far wrong if you start with Judah Brownny and his latest release.

The Meeting, released by Heavy Waves Music and with them also on the credits, is a deep delve into modern Dub territory. It’s an extremely well produced and engineered album from the off – with the right attention to detail on the dB and kHz to create a driving, Dub sound. Heavy, omnipresent bass? Check. Low pass filter to accentuate the tinnier instrumentation? Check. Maxed-up, elongated reverb? Check. But it’s Brownny’s vocals, themes and the overall composition which also impress.

The album opens with A Likkle Piece a Dis. It’s an incessant, unrepenting beast of a track. A synth drum roll and cymbal clash open proceedings. Then, a synth melodica joins in and the synths drums are elaborated on, with a one drop doubled-up kick on the upbeats. Electric guitars are syncopating for all their worth in the background. Finally, the bass comes in. As with all good Dub it’s the main focus of the track, and pushes hard on the downbeats, offsetting the one drop. There’s a gorgeous, triplet-led bridge between verses which gives A Likkle Piece a Dis some swing. As the track progresses, the instrumental layering becomes more complex. But it’s Brownny and Waves’ melody which is perhaps the strongest aspect of the music.

It is utterly infectious; a storming earworm with the chorus reverberating in your head well after the track has concluded. It’s a deft piece of composition: the four semiquavers, then quaver, then repeat… rhythm is perfection, immediately drawing your ear to the one drop and creating natural, albeit brief, breaks. The melody works off the E minor root, but only going up to the third and down via the tone in between. The combination of both these devices creates an instantly classic chorus – and overall, it’s a genius track. Masterful.

Stand Firm moves the EP further into Dub territory. The brief a cappella opening is a moment of compositional lightness before the heavy Dub sound kicks in. There’s not gradual layering as there was in A Likkle Piece… The synth drums, melodica and driving bass are all in there immediately. But the engineering is markedly different compared to the previous track. Gone is the focus on the bass, which is still on a downbeat focused riff, but rhythmically more syncopated than before. Its prominence is replaced with the melodica taking centre stage, along with the one drop. The synth snare is used to focus the upbeats, contrasting the melodica’s downbeats. This lighter touch allows Brownny’s performance to become central. Vocally, the arrangement is layered, with his lead accompanied with call and response backings. And its message, about the system’s shutting down of cannabis and how me must resist this, is potently delivered: “It is the symbol of wisdom”. Indeed.

Next, and Nuh Fraid a Dem is back to that driving Dub sound again, but with more Roots focus. Brownny loves the melodica, as it’s prominently back. Keys now play their part, interjecting with a basic bubble rhythm. The percussion is expertly arranged, with a rapid, hi hat-focused one drop plus frantic snares doing clattering semiquaver rolls in the half beat breaths before the downs, then on the ups. The downbeat bass is interesting, as its been engineered to rapidly fade out after each note, creating a throbbing effect. The reverb is delicately used; the Dub synths stab in and out, and the whole arrangement drives the sentiment of the track. As Brownny exalts, we must maintain strength in the face of Babylon’s adversity and those who would drag us down with them.

An extended version of All I Want, featuring Ranking Youth, has been accompanied by an excellent video available on YouTube. It’s a stripped back, brooding piece of Dub which again has been engineered to allow Brownny’s voice to take centre stage. Electric guitars play an effective backing vocal duty, doing a call and response to his main melody. Synth horns make a brief appearance, with a Marley-esque, triplet semiquaver fanfare which is dropped in as a bridge on occasion. But All I Want’s focus is undoubtedly the lyrical content. The narrative about the system, and its effects is searing. Judah Brownny pleads with us to wake up to the corruption that exists; corruption that ultimately is leaving so many people oppressed and destitute. ‘All he wants’ is the world to realise how nothing is working in our interests, and how unified love should be our ultimate goal. It’s a strongly delivered message, through both the stark musical arrangement and the equally raw lyrics.

While Under Pressure concludes The Meeting. It’s the most forward-progressing track of the EP, with an upsurge in BPM, a rapidly moving melodica riffing down the root chord, and synths reverberating around like a ricocheting machine gun. The bass is on a dotted quaver, incessantly driving riff which carries the track forward. There’s pointed Dub breaks; the one drop is replaced by the kick slamming on every beat; the intricate and syncopated percussion almost feels panicked – and the whole thing has a real sense of urgency; almost the ‘pressure’ of the title setting in. Brownny delivers another stellar performance, covering his vocal range with ease, using a falsetto at times, accompanied by some well-executed vocal runs. And the lyrical content matches the musical arrangement perfectly – about how the system and its pressures corrupt the youth, sending them down a path they shouldn’t be treading. It’s a storming closing to the EP, and serves as a solid retrospective of what’s come before it.

The EP finishes proper with Dub remixes of A Likkle Piece… and Stand Firm.

Judah Brownny The Meeting is a skilfully executed foray into proper Dub. The variation and engineering detail are of such quality that it means the EP is not just one sound, but a Smorgasbord of intricate musicality. It’s a masterclass in how to do Dub well, and how it can be structured and arranged to create a complex project. Brownny is a skilled vocalist – with copious amounts of light, shade and intonation across his flexible, passionate voice. Rhythmically he’s also impressive, with a delicious amount of variation in his performance. It’s an assured and technically deft EP – and a shining example of how to do Dub really well in 2020. Judah Brownny & Heavy Waves The Meeting review by Steve Topple (26th March 2020).