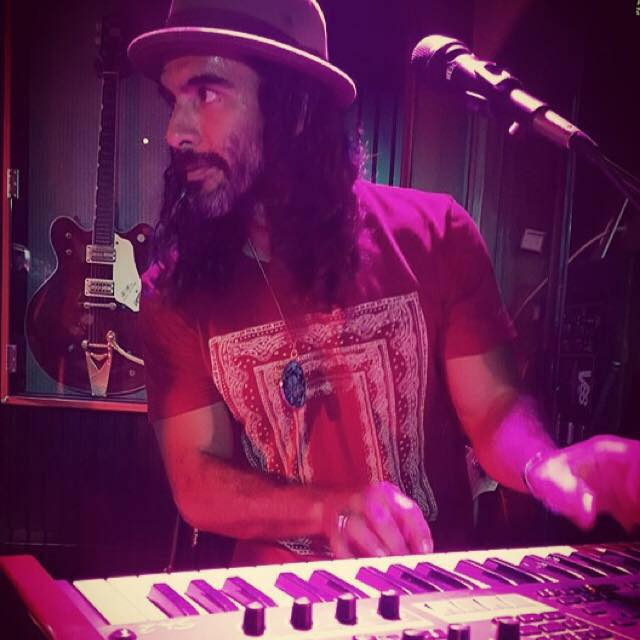 Jah Mex speaking says “I create music to elevate the spirit; both mine and yours. I saw a need for my own conscious revolution and now I’m sharing the vibe. Roots reggae rhythms, jazzy chords, and funky flavours; these are the sounds I love to arrange. True stories, messages, and requests; these are the lyrics I love to sing.

My sophomore album, Soul Garden Roots Version, was produced by reggae legend, Fully Fullwood. Released April, 2016, the album features myself on vocals and keyboards, along with members of Jamaica’s Soul Syndicate Band, including Santa Davis on drums, Tony Chin on guitar, Fully Fullwood on bass, and special guest, Rock Deadrick on percussion.

As a Southern California native, my first exposure to music was jazz, rock and soul from my mom’s 1960’s record collection. Viynl from The Doors, Miles Davis, Cal Tjader and Stevie Wonder were, and still, are my favorites. After discovering roots reggae from friends in Laguna Beach, I was soon inspired by the organ playing from Jamaican session players including Jackie Mittoo, Ossie Hibbert, Earl “Wiya” Lindo, and Keith Sterling. My Grandpa Ray was always playing Gospel music on the piano at home. So, I found my own ‘gospel music’ with the spiritual/revolutionary vibe in reggae.

Firm Soundation, my first album was also produced by Fully Fullwood. The opportunity came through California based guitarist, Dale Hauskins, after introducing my demo to Fully back in 2008. Since then, Fully has become a musical and personal mentor as well as a solid friend. Before writing and recording music, I was, and still am, a freelance keyboardist. One of my favorite years of this life so far is 2003, traveling as a keyboardist to Europe, Puerto Rico and Hawaii with a reggae legend: Eek A Mouse. ‘The Mouse’ and all his orginalality was a huge influence on me.

Doors have opened to play with more reggae legends including Marcia Griffiths, The Mighty Diamonds, Tippa Irie, Junior Reed, and Cornel Campbell. Recently in 2016, I played for The Rastafarians at Dub Club here in LA. It’s now a personal favorite ‘live show memory’. I’m also a founding member of Lesterfari & Kings Music, a roots reggae band from Los Angeles, consisting of musicians from Boom Shaka, along with Ronnie Stepper from Steel Pulse.

I’ve been blessed by wonderful people who continue to share knowledge of music, and the industry with me, and push me. You all know who you are because we cross paths all the time. Respect and love” – Jah Mex