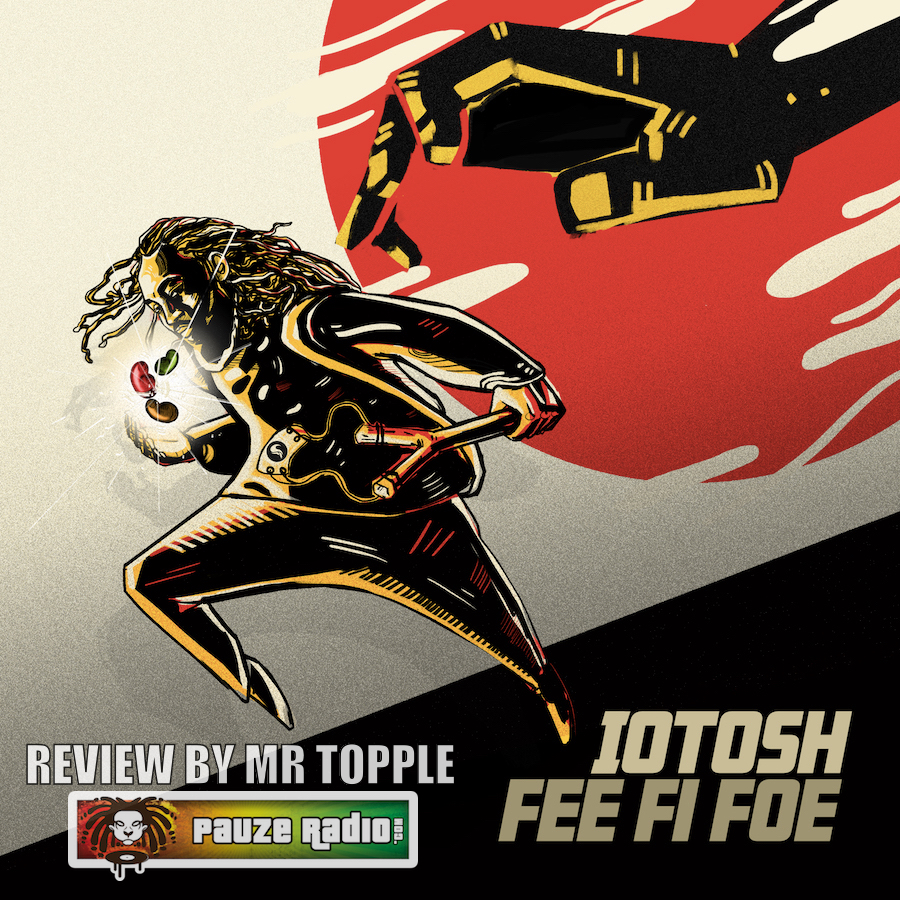 It’s always interesting to hear one of the most skilled producers in the business branch out into solo work. So, enter Iotosh with his third individual outing: a brilliant adventure in the realms of fairy tales.

Iotosh FEE FI FOE, released via SOUND TING, sees Iotosh spread his own wings. Having already made a name for himself as an inventive and inspired producer (working with Protoje, Lila Iké and Jesse Royal/Vybz Kartel among others), his third solo single builds on the sound that has gained him such a positive reputation already. Of course, Iotosh also co-produced the record – with Kareem ‘Remus’ Burrell, whose father Phillip “Fatis” Burrell founded the legendary reggae label Xterminator. The song samples a dub version for one of Fatis’s classic productions: Gunzalis by Luciano. And the end result is a brilliant merging of genres, with an equally genius theme.

It hones in on the current sound coming out of Jamaica – merging elements of various genres to create a haunting, unsettling yet somewhat rich vibe. Reggae is undoubtedly an influencer, here. FEE FI FOE’s bass forms the Gunzalis sample. It works around almost the same melody – albeit the riff has been pared back slightly, using the reduced-note, second bar phrase of the original. It instantly gives the track that winding, weaving Reggae/Dub vibe. Iotosh and Burrell have added in the briefest of instrumental nods to the genres, too – with synth horns occasionally stabbing in and out with sharp, staccato notes and riffs. Occasionally and almost out of earshot, keys tinker around a brief skank. Additional breaks feature, which at one point has engineering (reducing decay and compression) along with backing vocals that have been arranged to imitate reverb that makes you feel like the track is suddenly about to break out into a one-drop, bubble rhythm-led affair – yet cleverly, it never materialises.

But then, Iotosh and Burrell have mixed a heavy dose of Trap into all this. The main focus is the percussion; specifically, the hi-hats. Their rhythmic arrangement is intense and complex, working around heavily syncopated rhythms with those signature buzz rolls littering the track. They then intersect with the snare, which performs rim clicks on the upbeats (all a bit Reggae). Meanwhile, a deep and slightly distorted kick almost follows the bass’s rhythm. And around two-thirds of the way through there’s a glorious, punchy break where all the instrumentation focuses on extremely staccato notes to create a punchy accompaniment to Iotosh’s vocal; bringing in more traditional Hip Hop arrangement. It’s the perfect, 21st century fusing of styles that progressive Reggae producers like Iotosh have pioneered, and works excellently here.

What Iotosh and Burrell have also done so cleverly is to include some nice musical mimesis within the arrangement. The bass and kick almost feel like the rumbling of a giant’s footsteps – while those just out of earshot keys the pattering of David’s or Jack’s feet. Grasping horns feel like a giant’s hand, grabbing out. And the ethereal strings with their constant, high-pitched notes give the aura of something magical; possibly a bean stalk growing? It’s all highly engaging either way, and makes Iotosh’s equally compelling performance and lyrics come alive.

He’s undoubtedly an extremely intuitive and talented vocalist. His style here treads that fine line between straight vocal and singjay – melodically varying the arrangement, working further up his vocal register as the track progresses, then back down again to create a sense of urgency. His chorus is memorable and well delivered. But Iotosh really comes into his own with his rhythmic performance. He takes a basic, dotted note musical stanza on the first verse (‘oneeee-and-a-two-and-a-and-three-and-a-four-and’) and then embellishes this throughout with additional patterns that either flip this rhythm or add-in additional notation. There’s one remarkable section where he hits (and maintains) 10 syllables a second. And across all of this, his intonation and enunciation never drop; you’d be forgiven for thinking Iotosh is a rapper. Lyrically he’s built a compelling narrative around how Babylon and its proponents (the ‘giants’) are determined to defeat him and everyone conscious (the veritable likkle man) – including nice references to both the fairy tale (Jack and the Beanstalk) and the biblical story (David and Goliath) throughout. “No make dem rock you faith; focus pon the climb, cause dem will try fi block your way” is lyrical beauty, invoking both stories completely. And the accompanying visualiser from Joshua Solas and Nathanael Hay, with Iotosh running from a giant hand, complete the package perfectly.

FEE FI FOE is sheer genius from Iotosh and Burrell. Musically deft and filled with detail, it’s a clever piece of composition that encapsulates modern Jamaican music. The mimesis is skilfully done’ Iotosh has delivered equally ingenious lyrics and his performance is stunning. No ‘third time lucky’ about this track – as Iotosh as an artist in his own right is here to stay.