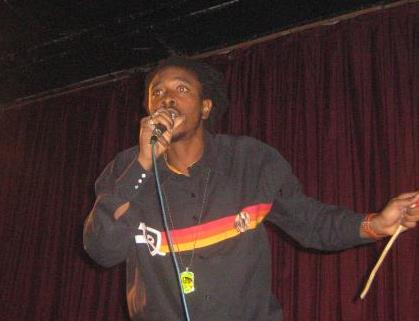 In the last few months the only Trini who could have missed the upsurge of new, dynamic locals on the reggae scene is one who has been living under a rock. The lyrics are conscious, the voices sweet and the melodies contagious. One of the most prominent of these new stars is Brendon Young, known by his fans as I-Sasha.

The name I-Sasha is a symbol of Young’s spirituality. Issachar is historically known as one of the 12 tribes of Israel and the young entertainer adapted the spelling of the name. Though I-Sasha sports dreadlocks, he says he does not conform to Rastafarianism but follows the teachings of the gospel, “believing in God of Israel, of many tribes including Judah, Asher and Issachar, God the father of Jesus Christ.”

This spiritual crooner, with his hazel brown, deep-set eyes and long flowing dreadlocks has the local lasses chanting his name. He sings, “Don’t you know your love is so divine,” and just like that, after years of being an obscure reggae performer, I-Sasha, the quiet La Horquetta boy, becomes a household name. He names his brother Kevin “Million Voice” Young as the principal source of his propensity for music. “Million always loved singing and out of respect for him and men like Beenie Man (Jamaican dancehall superstar), I just took to singing also when I was about 17. I performed for friends, sang at home and over the years worked on writing my own songs.”

Little did I-Sasha know that in a few years he would have a regional hit and the country would be singing along with him.He said it all started when Studio 53, a group of young producers from his area (La Horquetta) contacted him.

“I had been singing for some time and they knew about me and my brother ’cause they were from nearby. So though they were a small studio and we were considered small performers, as far as I was concerned, both groups had amazing talent and a connection was formed. Out of their beats and my lyrics, Don’t You Know was born and we had a hit. I was elated when I first heard it on the radio. Honestly, it’s my favourite song right now. I mean, I still love my Beres Hammond and my Glenn Washington, but to hear your own voice and to know people are singing the words you penned is phenomenal.“

But this part-time mason made it clear that he did not intend for his newfound fame to go to his head. He said his friends and neighbours still treated him the same and he would like to stay as humble as possible.

“My attitude won’t change, I’m still that guy from the ghetto. My main aim with all of this is not for me, but for my seven-year-old daughter and the youths around me. Though my daughter has her mother, it is my duty as a man to provide for her and be a role model for others.

“If it comes to a point where I can profit greatly from my music, then my beautiful baby girl will have a very stable future and I can also show people that the ghetto has just as much talent and promise as any other area.

“The children around me will see that hard work does yield great rewards. In the midst of the poverty, there is purpose and where there is a will there is a way, that’s my message.”

And for the Young family there is certainly a way. “It’s a way fuelled by togetherness and support,” said Million Voice, I-Sasha’s brother. One of the managers of the Young duo of I-Sasha and Million Voice is another sibling, Jason, who along with Nadine Williams, their co-manager, keeps them busy by lining up gigs. I-sasha most recently performed at the Mr and Ms Universe Pageant, held at the St Augustine campus November 11. He said he believed using his talent to give back to the youth and his country was essential.

“In the wake of this crime and devastation, good music is solace, and conscious, positive lyrics help fight ignorance and negativity. “Men like Prophet Benjamin, Jah Melody, Mr King and Khari Kill are some of the local performers who I would enjoy working with. They have that positivity that is missing today.”

But he takes a look at the negativity also. He believes that the extreme coldness and materialism of the world is the reason so many socially aware and compassionate performers are emerging. “Artistes are innately sensitive beings, I believe, and when you see your homeland dying, you have to sing about it, to talk about it. And that’s where the inspiration for some of the present music is coming from.

“Mr King talks about Nelson warring John John and scenarios like that, neighbouring and close areas who should be merging. Instead they are fighting. That is our sad reality. If crime doesn’t stop I don’t know where we will be in a few years.

“Though what I do know is, I will continue making music and praying that my listeners find solace or positive inspiration from it. “That’s my part in this war against crime and hopefully my next release, though I haven’t singled it out yet, will be just as well received as my present hit and I can continue bringing a conscious, positive vibe.”