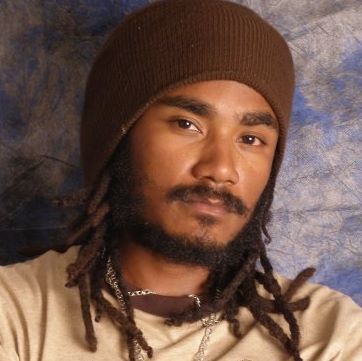 My birth name is Raymond John, Performing as I-Rate, I was born and raised in Nassau, Bahamas. I am a self-taught guitarist/ singer/songwriter. I have been writing and composing music for 11 years.

My style of music consists of reggae fused with hip hop and R&B creating a very unique sound which I simply call.Soul Music. I believe in writing songs about life, love, truth and giving praises to the Most High Jah.

My journey in music began after I graduated from high school (St. John’s College) in 1996. I guess I can say music found me because it was never something that I thought I would end up pursuing as a career. I never sang in school or church, I never had any musical influences in my family and I never had any interest in playing any instruments, so I know this must be a gift from Jah. After I came out of school, I felt my life needed direction and I found love and stability in Jah. I decided to grow my hair naturally, stopped eating meat, read my Bible more and tried to live a more conscious lifestyle in an effort to develop myself spiritually and mentally as a person. I found an interest in guitars and ever since I picked one up, my life has not been the same. I felt I had lived my life aimlessly until this point…I had found my purpose. It wasn’t easy but through God’s will I eventually taught myself how to play the guitar. I read books, watched people who used to play, learned chords and progressions and stuff like that until I got it. I started writing songs and composing music for them.

I first started playing at local poetry readings, speak easy and coffee shops. My friends at the time gave me the name I-Ray and it has been with me ever since. Wanting to do more than just play solo, I felt a need to form a band. So in 1998 I put a four piece band together and we started practicing. We had a drummer, a bass player and two guitar players; we called ourselves the “Uprising Band” and played a mixture of cover songs and originals. We got our first gig at a local night club called “The Next Level.” We also performed at a small club in downtown Nassau named “Mangoes” on weekends. We also opened for a few local concerts including “Peace On The Streets” featuring Capleton, Junior Reed and Tanya Stevens 1999 and Lexxus Christmas Party in 2001. But sadly, the band eventually fell apart due to lack of paid gigs and poor support of Bahamian artists from the local music industry.

In 2001, feeling discouraged but not defeated, my fellow guitarist Christophe Mitchell and I left Nassau and went to Canada where his brother Craig Mitchell had recently opened his studio. We formed a group and called ourselves “Jah Love Live” or “JLL” for short. For 5 months we worked on an album and formed our own label named “Jah Love Live Productions.” We named the album “Burn Babylon Burn” and it was a mixture of hip hop and reggae. So with that in hand, I came back to Nassau to promote the album. It was released in the Juke Box Mall at Marathon in November of 2001. The first single released from the album was called “Keep The Joy.” We got a good response but unfortunately very little had changed in the music industry and there was still little support. As a Bahamian artist, if you weren’t singing ‘rake and scrape’ your music was not considered Bahamian and you got no airplay. So for a long time after that,

I disappeared from the music scene for about five or six years. I never lost my faith in music though, I still played and wrote songs and did a few solo performances at a place called “The Spot.” But ultimately, I had given up on trying to deal with an industry that didn’t support me. As the years passed I noticed a change in the industry. Local artists got more exposure, more airtime and acknowledgement. So there I was, just sitting at home with all these songs I had written over the years…… I decided it was time for me to continue where I had left off. In 2008, I got a link through a friend of mine with this guy in Freeport named Trez Allen who did music promotion. I went to Freeport and met with him and we became very good friends.

One day he asked me what my stage name was and I told him everyone calls me I-Ray. He was like “you need a name with more presence and listening to the words of your songs, sound like you vex with Babylon system, like you upset, you sound I-Rate with them.” So that’s how the name I-Rate came about because truly I am vex and upset with the things going on in our country, the crime, corruption, murder, poverty and carelessness of our youth. But I’m not upset in a way where I am going to counter act with violence. I feel I can fight these things with God’s love through music. In my heart I truly believe this is why Jah has blessed me with this gift, this is God’s purpose for my life. So anyway back to the story, my friend Trez encouraged me to get in the studio and I recorded my first single as a solo artist with hot shot producer Ashanti Carey. The name of the song was “Cyan Rule/Cyan Cool.” I came back to Nassau and released my new single in April of 2008. Five months later, I released my next single “I Believe” produced by Patrick ‘Dreddy Star’ Carey Jr. Shortly after, I signed with the management group “Make ‘em Listen” run by Patricia Chatti. Since then I have gotten a lot of support from people in the industry, radio stations and local dj’s.

I have performed at many local events ranging from concerts to night club performances. Recently, I have released my first music video for the single “I Believe” and I plan to take my music to an international level this year. It has been a long journey for me and it has not been easy. But now that I’m on my musical trod again, I have no plans of stopping or quitting. I have my sights set straight ahead and through the powers of The Most High Jah, I hope to touch hearts around the world with the music Jah has blessed me with. JAH LOVE LIVE ALWAYS