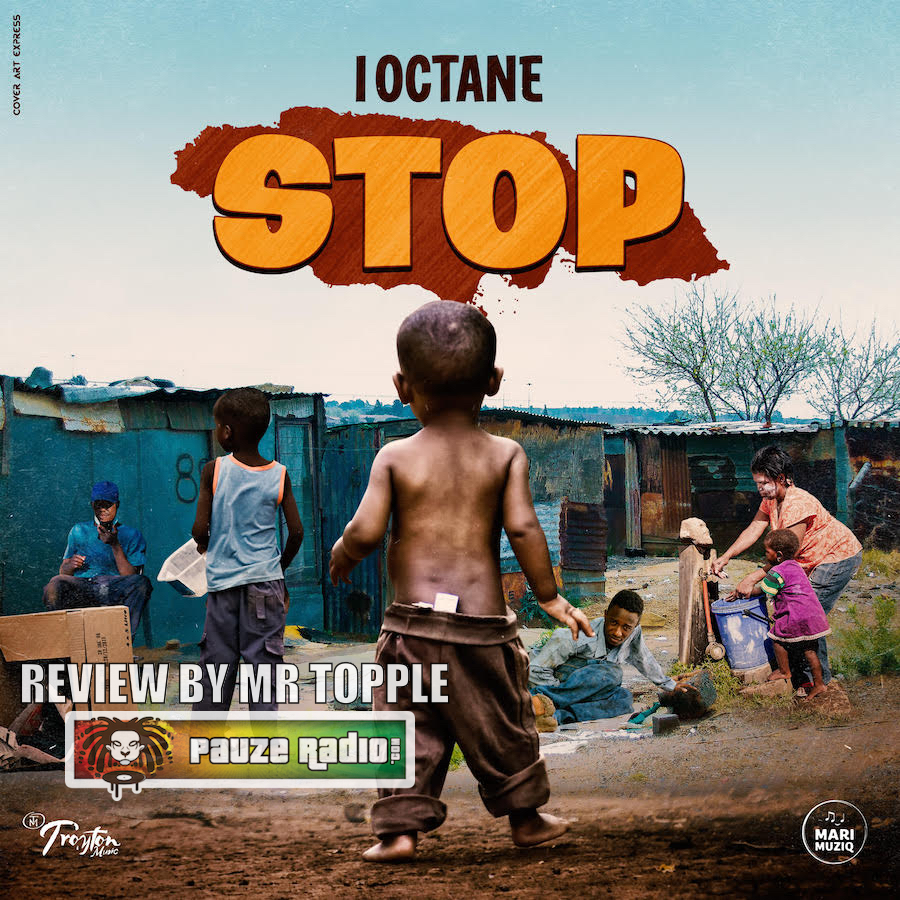 After the success of his woman-focused Moods album, I-Octane has turned his attention from singing female praises to addressing systemic inequality and poverty. And it shows the breadth and depth of his artistic skill – but is also perhaps lyrically his strongest (and given his status, bravest) in recent years.

I-Octane Stop, released via Conquer The Globe Productions, sees I-Octane return to his conscious Roots. The track is produced by Troyton Music and Mari Muziq – who have created an effective and engaging musical backdrop, focused around the smooth, RnB-driven end of AfroDancehall. The overall finish of the track is rich and warm, showing finesse of mixing and mastering. And this lush feel complements the intricate composition perfectly.

It’s driven by that broken Dancehall clave (‘oneeeeee-twooo-and-[three]-and-fourrr’) cementing the more AfroDancehall feel – played out across both the snare and kick. But Troyton and Mari have at times removed the snare, to bring a slightly less abrasive feel to the beat. There’s some pleasing additional percussion, including effective use of a tambourine, blocks and shaker. Meanwhile, the bass follows a similar rhythmic pattern to the clave, but with some additional syncopation and melodically being driven by an attractive melody. Its tone is rich and rounded but its style slightly picked. This means that while the bass doesn’t make Stop too in-your-face, it still hasn’t decent movement. But on top of these AfroDancehall sensibilities, Troyton and Mari have included some excellent additional instrumentation that moves Stop into the more elegant side of the genre.

A piano line tinkers in and out, running a pleasing melody around the mid-area of the treble clef while the left hand runs chords. It’s juxtaposed with an electric organ, which runs a countermelody further up its register. Then, an acoustic guitar gently lilts across generally arpeggio (broken) chords. All these lines add something more delicate to the track – and bring with them warmth and a more emotive feel.

Overall, Stop is musically endearing and affecting. Then, I-Octane brings the vocals on-point as he always does. Here, he makes very good use of dynamic light and shade in terms of taking his voice to almost a whisper at points to accentuate the lyrics – before raising it back up again to a near-scream in anger. He’s constructed an attractive melody, which he embellishes well with riffs and runs. I-Octane also makes good use of varying note lengths to make certain lyrical phrases stand out. But it is his lyrics which are perhaps the most crucial part of Stop.

I-Octane has faced some criticism online, because people believe that he’s using the grinding poverty and inequality in Jamaica to further his music and promote this song. But these comments seem to be in bad faith. Because what Stop represents is a return to his previous conscious work – except with this track, he really pulls no punches.

Taking down Babylon’s “system [that’s] to blame” for the ravaging poverty that exists in Jamaica (and the world more broadly) I-Octane does things differently in terms of the narrative, here – focusing on the pride of Jamaica’s poorest residents, as opposed to the often-used pity that some artists want us to feel. But he still resonantly describes the reality of the dire situation for so many people in the country.

But I-Octane also takes direct aim at all of Jamaica’s politicians, regardless of their party, who should feel “shame” if they bothered to “walk through the ghetto”. His damning chorus, as he spits “me ghetto people, stop vote fi sugar, stop vote fi salt”, is a clever analogy for the careerist politicians who, despite the colour of their rosette, are all really the same – and are doing nothing to change the situation for too many people. He also questions the effect that democratic politics has for the poorest people, as he sings about how voting doesn’t really change anything. This has also been reflected in his social media output – where he’s repeatedly launched damning but much-needed diatribes against Jamaican PM Andrew Holness. For an artist of I-Octane’s standing to come out so openly against politicians and their lack of actions is a brave move – and one not often seen.

Overall, Stop is searing, political work from Troyton, Mari and I-Octane. It’s a musically gorgeous track, which is attractive and infinitely listenable. But it’s I-Octane’s bold and unrepentant lyrics which truly stand out – and are among the year’s most direct, and in some respect strongest, political narratives. All power to I-Octane – and ignore the detractors.