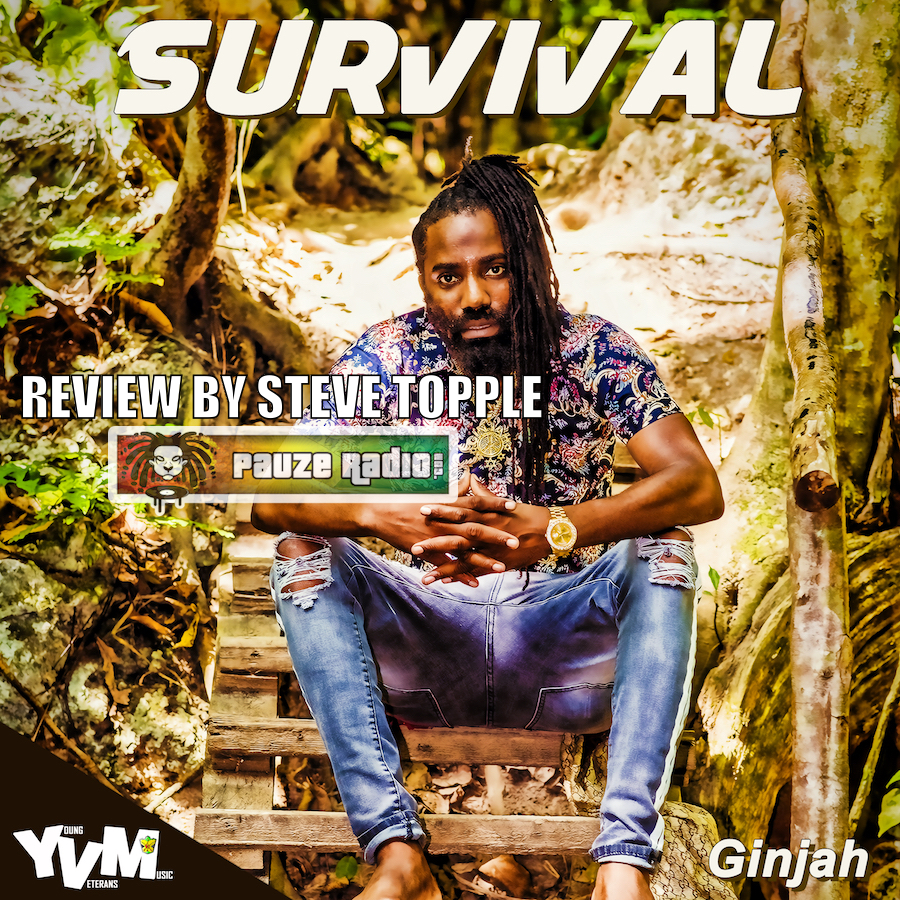 When an artist kicks off their third decade in the industry with a new album, they had better hope the end-product is something special. But there’s no concerns on that front for Ginjah, who’s latest release is truly magical.

Ginjah Survival, released via Young Veterans and VPAL Music, is a deftly-handled journey into Soul-inspired Roots and Reggae. It’s an overly-vocal and lyric-led album, riddled with delicate musical intricacies and moments of delight. Production, from Young Veteran’s brothers Andrew and Sheldon Pennicott, is of course first rate. They also did the majority of the composition, along with Ginjah. But this is his vehicle. And on it he shines.

The album opens with Jah By My Side, and it sets the tone perfectly for the rest of Ginjah Survival. You’d be loathed to call it Roots, as it leans towards the more radio-friendly side of Reggae. The usual Roots devices are there: keys tread a bubble rhythm, the drums do a one drop with the kick on the upbeats and the bass does a two-bar phrased riff, focused on beats one and two, and alternatively also four; giving the track a swing. But it’s the additional compositional elements which elevate the track, and bring in elements of Soul.

The whining electric guitars flit in and out, while their acoustic cousins juxtapose the bubble rhythm by riffing around the downbeats. The trumpet trombone, from V. Scott and E. Gayle respectively, perform an almost call and response duty, alternating short, punchy end-bar interventions with drawn-out semibreves on the downbeats; these then morph to stabbing, staccato one note drops. The backing vocals perform the dual role of call and response, and embellishing the main melody. But then a heavy use of a melodica drags the track back to its Reggae roots.

But Ginjah’s lyrics rule supreme. Jah By My Side is an exceptionally well-written narrative. What makes it so special is its accessibility. From the off, as Ginjah proclaims “A lotta bills to pay; anedda baby’s on deh way. To God I pray – hoping for better days”, you know he’s speaking to everyone who’s every struggled in life and in a way which everyone can understand. This breaking-down hammers home the message, to trust in Jah, and it’s amplified by the sensational composition.

Next, and Fire Blaze moves the album into more brooding Roots/Soul territory, with some Rock-Blues thrown in for good measure. The bubble rhythm and guitar skanks are mixed up slightly, dropping off at time on the off-third beat of the bar, which gives additional breathing space. That melodica is back again, performing delicate but pointed riffs – with an all-too-brief improvised flourish near the end. But it’s the whining electric guitar from J. Donegan, which at times uses some delicate pitch harmonics to amplify the wail, that’s almost centre-stage. Performing an alternate melody line, it varies between Isley Brothers smooth Soul and Eric Clapton screeching Rock-Blues. It lifts the minor key track to another level. Again, the background vocals are also a heavy element, Soul-driven and on point. The inclusion of a vibraslap completes this edgy, unsettling but ultimately poignant track.

Jah Light smashes up what’s come before it, namely due to the Pennicott brothers extremely smart production and mastering. It opens by fooling you into thinking it could be Dub or Dancehall, the dB on the bass is raised so much. Then the keys reverb is maxed and the horns stab in and out. But the track actually moves into more traditional Roots territory; albeit with that electric guitar being at the fore, again. But the breaks in the percussion, where the reverbed keys come back, leaving just an intermittent bass and the vocal lines, remind us of the centrality of Dub to Jah Light. It’s a cleverly written and produced track, awash with some finely-tuned musical ambiguity.

There’s an interesting contradiction at the heart of Shootie Shootie. The subject matter, about gang violence and murder rates, is hardly uplifting stuff. But the composition is paradoxically that. In a major key, the main melody has been written with some Soul sensibility, working off the perfect fourth of the root chord, then down to the third, but never really involving itself in the root until the end of the phrase. It’s also an utterly infectious earworm, along with being a proper RnB-Reggae crossover track, as no one musical device dominates. And the subject matter, “Jamaica don’t need no more shootie”, is as pertinent as ever.

Many Mountains is a glorious amalgamation of Roots, Dub and Gospel-laced Funky Soul. All the first’s devices are there. The second has it’s breaks and elongated reverb littered throughout. But it’s the Funky Soul which really drives the track forward. It’s clear from the introduction, with the rapid top-down piano glissando, the semiquaver horn punches and the use of chimes. Moreover, the main melody is intrinsically Gospel. The use of the crotchet-semibreve-dotted crotchet rhythmic pattern on the chorus, and the beamed nature of the verses is straight out of the genre’s playbook. You could easily strip away the Roots elements and be left with a high-class, funky Gospel track. But this mashing-up is pure Ginjah. And it works deliciously.

The title track moves back to more Roots/Dub territory. But interestingly, there are echoes of slowed down Soca in there as well. The bass is on a ten-beat, beamed-then-rapid clave, which although not a set pattern is endemic of Soca. This is then echoed by the electric guitar, to make that winding riff prominent. The less structured, almost lazy horn arrangement adds to this. Plus, the addition of synths strings and some clever mashing up of the vocal via a vocoder just adds to that modern, Soca feel. It’s a fresh take on Roots, merging one of its derivative genres to create a swinging, swaying groove. Nice.

Stronger Together takes the Soca nod and moves it further forward and up a notch, too. The bass riff is a further, more syncopated and embellished clave. The driving emphasis on the up-and-off beats from the keys, guitars, kick and horns makes the track feel almost frantic. The percussive emphasis is on the hi-hats, giving airiness to proceedings. But some Dub breaks and synths are thrown in together. All in all, it acts as a partner track to Survive, and works wonderfully well.

If you want an example of Ginjah at his thematically most potent, then White Lies is possibly it. Musically, it leans towards a smoothed out, Roots ballad, of sorts – in terms of there’s something slightly sombre about it, despite the mixing of major and minor keys and chord sequences. T. Green’s sax adds to this, and the use of a synth organ, just out of earshot, also makes it slightly moving. The sudden, forceful and frantic bridge, which slowly builds in layering and rhythmic intensity, is unexpected, and packs a musical and emotional punch; almost taking you aback.

But it’s Ginjah’s and F. Forrest’s performances which perhaps push the track into more poignancy. They’re possibly the most tightly-arranged and engineered vocals on the album. Forrest’s timing with Ginjah is impeccable, and her flourishes on top of Ginjah’s main performance demonstrate an exciting and exceptional voice. And of course, the devastatingly powerful lyrics, which should not need any explanation, finish off what is perhaps the album’s strongest track.

Moving is probably the most stripped-back Roots cut on Survival. It’s somewhat Marley in its arrangement, with the syncopated, almost Rocksteady bass, the Rock electric guitars and a melodica treading a persistent musical path throughout. Meanwhile, To Be Alone takes the album back to Reggae-Pop-Soul territory, but leans more towards the latter of the three genres with the introduction of a Hammond-esque organ and the heavily layered vocals. And Gayle’s impressive trombone is back, finishing of To Be Alone perfectly.

Special Friends is another one of Ginjah’s gorgeous Roots/Soul hybrids, but more stripped back. The funky, rounded bass skips the first downbeat enhancing the prominent one drop kick. The electric guitar riffs off in a world of its own as do the horns. The choppy, bubble rhythm keys are contrasted by a Hammond organ again, and guitars skank just out of earshot. This more basic arrangement serves to narrow the focus very much onto Ginjah’s relentless vocal. He barely stops for breath, also making good use of horizontal and vertical embouchure, the clipping of ends of phrase and some particularly funky riffing.

The album finishes with I’m Alive. The sign of a good album is when its conclusion is the sum of the parts that came before it. And the track is no exception to that rule. One drops, bubble rhythms and Rocksteady basses are all present. The electric guitars perform a crisp half-Soca, Latin vibe mixed with some dulled, reverbed Clapton Rock-Blues. The funky Hammond organ riffs like its life depended on it. Call and response backing vocals from Forrest compliment Ginjah perfectly. And the thematic content also brings the record to a perfect conclusion; that despite everything that has come before you in life, you’re still ‘alive’ And no one can hold you down.

As always, Ginjah’s voice is a revelation. He has one of the most unique voices to have come out of Jamaica in recent years. Not least because he is far more a Soul singer than he is Roots. His husky yet rich, raw yet technically polished and utterly compelling voice is outstanding. He manages notes in the high tenor range well beyond the capabilities of many vocalists. But this is coupled with a strong, rounded lower range and an effortless falsetto – which he employs skilfully but not excessively. This focus on the top range of his tenor puts him vocally in the same league as the Brian McKnight and Luther Vandross’s of this world. Riffs and runs just roll out of his mouth; light and shade are omnipresent and Ginjah has perhaps one of the most expressive vibratos around. He is an absolute joy to listen to. And listen to his voice you could, for hours.

Survival is a pitch-perfect creation from Ginjah and Young Veterans. Expertly produced and engineered, it’s worthy of any major label. The compositions are smart, intuitive and refreshing. Arrangements are designed to move you to the musical genres which the composers intended. And the inclusion of tasty, stylistic intricacies is an added surprise. Lyrically and thematically it’s also perfectly crafted: not overly preachy in terms of the message, but subtlety forceful in telling you what you need to hear. But it’s Ginjah’s voice which is really the centre piece. He is exceptionally talented, and Survival rightly hangs off his supremely powerful instrument. The album should be a watershed moment for this stellar artist. And will surely cement his career for the coming decades. Ginjah Survival review by Steve Topple (19th March 2020).