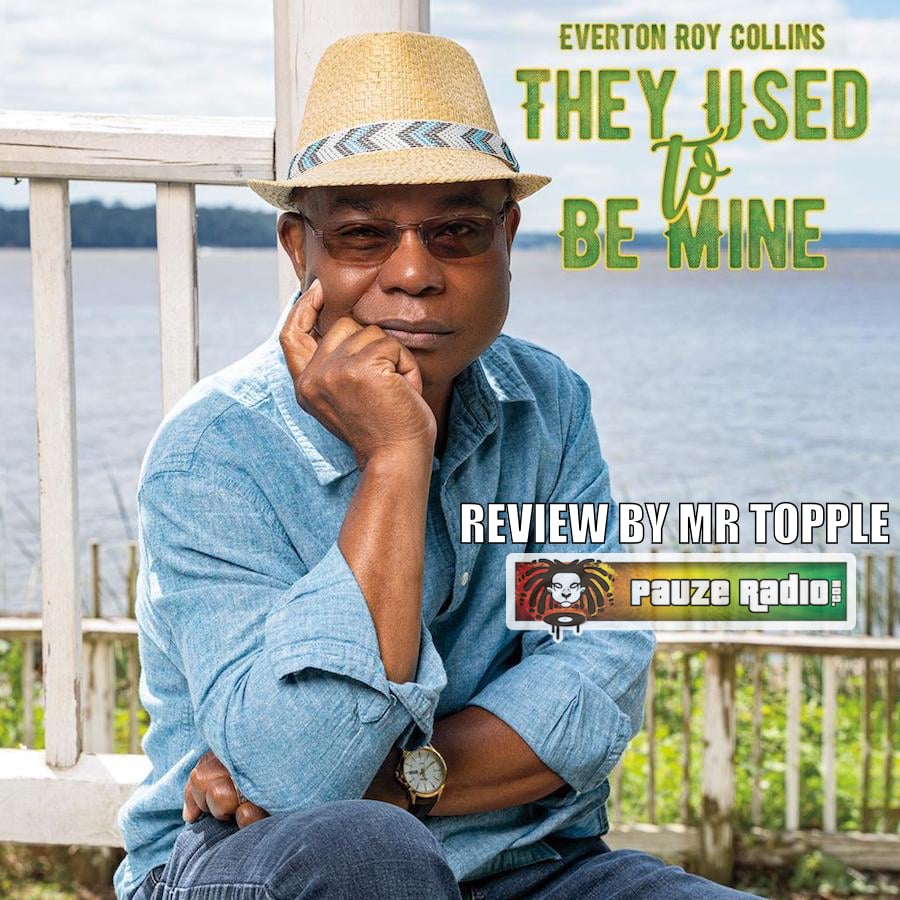 Everton Roy Collins – They Used To Be Mine – Review

Everton Roy Collins: They Used To Be Mine Album Review by Mr Topple for Pauzeradio.com.

Everton Roy Collins has returned with his third album – and to say it is a rich, intricate and pleasing affair would be an understatement.

They Used To Be Mine, released via Mission Hill Records, sees Collins return nearly 30 years after his first release. Produced by John Harley, the album is a veritable banquet of Lover’s Rock and Reggae – but with heavy influences of Rock and Blues. The array of musicians featured is impressive, too – including Ryan Wilson on a versatile bass, Hartley’s drums and trumpet, and Brittany Thompkins gorgeous and expertly performed backing vocals. The final mastering is very good – with a rich and detailed sound that matches the instrumental lines each arrangement pushes to the fore. It should be noted that some of the tracks are reworkings of cuts from Collins’ 1990 album Missionary Man – but they are well worth revisiting – and serve to increase this strong album’s appeal.

If You Want To Dance is pure, swaying, Lover’s Rock with all the musical devices playing off against each other well. The drums are on a one drop with some prominent cymbal clashes; keys run a bubble rhythm but with some pleasing and detailed riffs and runs in between which are very Bluesy, while the bass wanders up and down its register with an interesting drop-beat rhythm – missing the four but coming in on the final off. There’s a funky, rasping wah-wah’d electric guitar, a pleasing singjay from Michael Foreign, and Collins gives a warm and smooth performance – calling on a woman he likes to come and dance with him, hopefully for more.

The title track sees a complete change of tack, narratively. Musically its pure Reggae – again, with many of the musical devices that we would expect. The sound is richer, though: the bass is lower in its register, keys are less prominent as is the guitar. The electric guitar lines a paired-back with almost a Country feel at points – and the drums are less harsh then on track one. Additional horns bring added interest, too – with some nice response lines to the main vocal calls. But what really stands out is the change of lyrical content. Collins is lamenting the loss of regular contact with his two children and the breakdown of the relationship with their mother. Consequently, he gives a poised and heartfelt performance, filled with emotion and fully utilising his impressive mid-to-upper tenor range. It’s affecting and moving, and immediately one of the stronger tracks on the album.

Tell Me Why continues to take They Used To Be Mine further down this thoughtful path – but moving back to something more Lover’s Rock, narrative-wise. The musical arrangement is more intricate than what’s come before it. There are multiple electric guitar lines, working out of both inputs; rich and vocal-like multiple sax lines which respond to Collins main calls and also do a pleasing bridge duet. The guitars are distinctly Cali Rock – with their bending, whining and blue notes. Collins is on-point again and has constructed a fascinating, third person narrative (which may well be about himself) – discussing the breakdown of one relationship while another one is blossoming, and the confusion that brings. It’s strong and the Rock influences coupled with the sax lines make it delicious.

Hush Little Daughter continues in this pleasing, sensitive vein – before They Used To Be Mine changes course again. I’m A Hero almost winds things back to an Old Skool Dancehall sound, with its us of the root to major 7th chord progression. The musical arrangement is stripped back accordingly, to good effect – because it allows the horns to come to the fore as almost a backing vocal line for Collins. Here, they are particularly effective, taking on a vocal quality with their crescendo and decrescendo, vibrato and pleasing unison – as well as good note clipping and extension. But again, it’s Collins who really hits the mark. His vocal is humble but forthright and persistent, as he discusses his early life but more importantly the racism, segregation and persecution white people have meted out against him and Black people more broadly – but yet, he and they are still ‘heroes’. It’s affecting and well executed.

Then, They Used To Be Mine moves into something more Soulful with Sitting On The Corner. It opens as it means to go on – with an impressive, melodic and blissed-out opening before it heads into really wound down Reggae-meets Soul. The Reggae devices are just about there – keys on a bubble rhythm which is almost out of earshot, and a kind-of one drop on the drums. But otherwise, the track is Soul: the BPM is low, the bass fluid and resonant, some lilting guitars wind in and out, and the keys, when they’re not running a bubble rhythm, riff. The drums make prominent use of the impressive vocal performance that waxes and wanes with some beautiful backing vocals too. It’s a refreshing move away from Reggae and is impressive.

Missionary Man then takes the album back to Reggae. Here, stripped-back chord progressions see the track focus mainly around the root while the instrumentation is not overly fussy, which is a good thing. This allows for certain instrumental lines to stand out – like the rapidly skanking guitar, pattering bongos and horn section. Collins gives an impassioned performance and the track works well.

The album brings back the Lover’s Rock vibes across I’m On Fire (notably in the same key as the previous track). The BPM is upped slightly to give the track some swagger, enhanced by the continuously moving bass line and the skitting hi-hats across the drum line. There’s a nice inclusion of a dampened electric organ, which does quick-fire riffs at the end of some bars and a brilliant solo section two-thirds of the way through – and Foreign returns with a very rapid-fire singjay. The interjection of occasional horns is good and Collins sings his heart out, with some soulful blue notes as he laments about the woman he wants, but who is currently rejecting his advances. Pleasing stuff – and Foreign’s singjay here is a stand-out.

Everywhere I Go then returns They Used To Be Mine to something conscious. Reggae is still dominant but that richer sound with Rock influences returns again – and it’s possibly Collins’ new signature style. The chord progressions here are extremely good – with quick flips from major to minor and then back again – not only creating interest but also a sense of uncertainty. The horn section is once again extremely good and the drums are forthright; the Rock guitars bring an added emotive element and there’s some great arrangement of responses across multiple instruments to Collins’ calls. And quite the calls they are – as he discusses how systemic racism and poverty have never really changed thanks to Babylon’s all-encompassing slavery it keeps Black and poor people in. It’s rousing and a particularly strong musical arrangement.

Next, and The Responsibility sees the Rock/Soul Reggae theme continue – with a lovely electric organ returning, some smart horns and a skitting electric guitar frantically picking in the background. Collins delivers a sermon of sorts, across mainly the root chord again (except for the bridge) – discussing Babylon once more and how those of us who try and fight back are often demonised – when, we should be risen-up and listened to.

The Grass Ain’t No Greener switches the album’s sound up slightly again. You almost want to say Ska due to the pacey BPM, busier drum arrangement and wandering bass. But it’s not quite that – it’s still Reggae but with a bit of a kick and some pleasing chord progressions that aid the forward momentum. The horns drag us back to Ska though, as they sway side to side across rapid fire sequences – with the dynamics at full pelt. Collins delivers an equally buoyant performance, singing with strong dynamics and even flipping into his falsetto at points. His message about Babylon’s tricks regarding jealously, envy and wanting things we don’t necessarily need and how we can counter this with self-belief, humbleness and coming together as a society against this is strong. Stirring and effervescent.

The album closes with Everyday (Annette’s Song). It’s a veritable Lover’s Rock song of praise to the Annette in question – clearly the love of Collins’ life. It’s very upbeat, with a rapid-fire drum section pushing the track forward, while the stuttering bass drops multiple beats, almost forming a Dancehall clave at points, to increase the feeling of momentum. Keys run a bubble rhythm with some funky riffs, while horns dive in and out and electric guitars tinker in the background. Chord progressions see an actual key change at one point, while the backing vocals complement all this perfectly. Collins is clearly in his element and heartfelt – as his love for Annette jumps out of your headphones – and it makes for a strong, upbeat and glorious end to the album.

Overall, They Used To Be Mine is a strong offering from Collins and all involved. The musical arrangements are good quality with pleasing attention to detail; Collins’ voice is strong and versatile and he’s concocted a strong array of lyrical narratives throughout. Let’s hope we don’t have to wait so long again for another album from him.