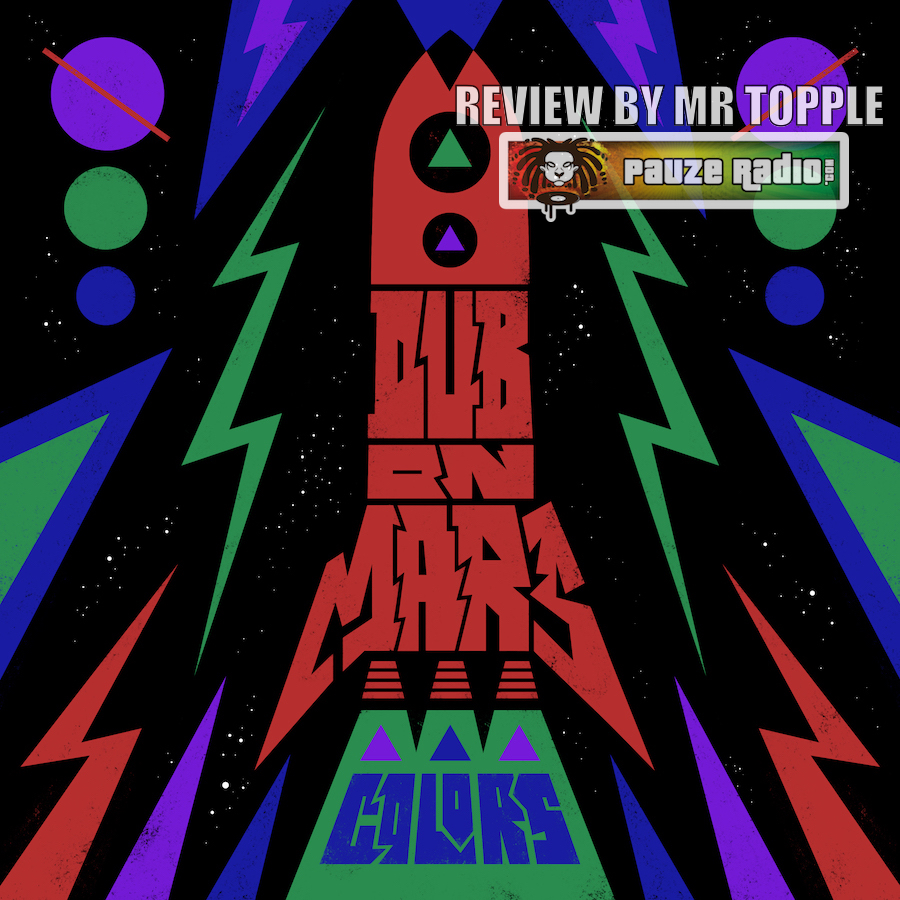 After the success of the single Drunk with Sweetness featuring Awa Fall, Italy-based producer and bassist Dub on Mars has released a new EP – and it’s filled with vibrant musical colours.

“The concept behind the EP is how colours can affect us and touch our souls with different impressions. For example, how black can communicate strength or how blue is often related with sadness and red with love and passion. That’s just to name a few of the variety of emotions that the colour range can recall.
This diversification also can be appreciated on the vocal ranges of artists participating on the five tracks. This unicity creates an extremely eclectic and multifaceted album”.

The EP undoubtedly reflects that mantra. There is a solid line up of musicians that Mars has brought in: himself on bass; Lambert Forani on sax; Luca Fusari providing the guitars; Matteo Paggi on the trumpet and trombone; Riccardo Pasquali across the keys and Luca Ventura on drums and percussion. The artwork is from graphic designer and illustrator Matteo Anselmo.

Across Colors’ five tracks, Mars’s production and mixing is of top quality – reflecting a strong level of attention to detail. Then, the mastering from Simone Squillario is effective with particular attention to detail on each of the artist’s vocals and how they interact with the varying musical backdrops. If there was one issue with the finish it’s that the dB levels are slightly low – Squillario could have been bolder at raising the final dynamic up a notch. But it’s the compositions and artist’s performances which also stand out.

The EP opens with Don’t You Get Enough featuring vocals from Giallo Man. It’s an overly Steppers affair – driven by the kick on an incessant four-to-the-floor and some pointed but sparsely used syncopation across the snare coupled with relentless hi-hats. Then, other musical devices also come into play. Keys run a choppy bubble rhythm which weaves in and out. The bass is fluid and forward-moving across dotted notation and melodically with a mixture of arpeggio chords and a more intricate arrangement. There’s a nice use of an electric organ which runs vibrato’d chords at points and then breaks out into something more complex and choral across the bridge; some good samples are incorporated as is the additional percussion including bongos/djembe. Mars’s overall arrangement and production is strong: the track ebbs and flows with nice Dub breaks and peaking and troughing of the instrumentation. Then, Man’s vocal is strong. He has an attractive voice which he shows great restraint with. His mid-tenor range is pleasing; he has an ear for expressive arrangement in terms of note length and dynamics and lyrically, his narrative giving a rallying cry for unity in the face of the system’s oppression is strong. Overall, Don’t You Get Enough is a strong opening for Colors.

Next, and Awa Fall delivers the previously released Drunk With Sweetness. It winds things back a notch from the opening in terms of arrangement, but that Steppers vibe is still there with the drums running a similar pattern to Don’t You Get Enough. The bass is more melodically intricate here – working up and down its register with a distinctly picked feel to it. Keys run another bubble rhythm which is positioned slightly further in the background. There’s a brilliant use of a synth pad drum sound, taking things back in time and again, Mars has provided good breaks throughout. Then, horns enter the fray for the first time – and are central to Drunk on Sweetness’s vibe. They run a wonderfully harmonised and executed countermelodic line to Fall’s main one. Weaving in and out, they bring richness to what is otherwise a more musically sparse track. Fall is impressive as always. Here, she is forthright in terms of dynamic, working melodically around both the upper and lower ends of her register. She employs some rapid-fire rhythmic arrangement across the verses which is skilled. Lyrically, her Lover’s Rock-style words are pleasing – and overall, Drunk on Sweetness is a strong track.

Night Blue Lagoon brings Veronica in on vocals. Here, Colors EP changes path – away from Steppers and into straighter Reggae; kind of. The bass is a dominant force here, running a one drop-led rhythmic arrangement which glides across the track more smoothly than previously seen. Drums, though, avoid a one drop, with the kick dominant on the down beats (with doubling up on the third across each second bar) while the snare focuses on the two and four and hi-hats fill the spaces in between. Keys run a bubble rhythm but higher up their register with additional syncopation at the end of some bars. A guitar line skanks with some rapid embellishment at points. The horns are lazy, running a smooth, almost mournful refrain which is prominent on the bridge where their line becomes a solo piece. There’s a beautifully arranged synth string section on Night Blue Lagoon, too: high up in the treble clef with reverb and high-passing added to provide an ethereal feel which ties in perfectly with the other instrumentation. Veronica is on-point: laid-back but still pointed, her smooth, soulful and delicate vocal weaves across the music with particularly good breath control as well as a maintained upper-soprano, head voice. And overall, Night Blue Lagoon is a thing of mesmerising beauty.

Artists DragonflyS and Oumy deliver Women in Red which expands on the Reggae vibes from Night Blue Lagoon but also brings back in something of the Steppers (again, driven by the drums and their rapid-fire arrangement). The end result is something funky and winding. But Mars has mixed up which instrumentation is dominant here. This time, keys take more of a lead role. They sit on a bubble rhythm still, but there is a lot of additional funky Soul/Jazz syncopation and melodic arrangement involved. A skanking guitar has also been brought to the fore which then breaks out into bending riffs – while it’s heavily wah-wah’d counterpart growls at points throughout. The bass is swaggering across Women in Red and this overall arrangement is enhanced by Mars’s clever use of breaks. Then, DragonflyS and Oumy have provided smoky, Jazz-like vocals which complement each other perfectly. They’ve created attractive vocal lines which hone in on the musical arrangement extremely well. All this combined has given Women in Red a funky, Reggae-based vibe which is infinitely listenable.

Colors EP closes with Nuff People a Suffer from Twan Tee – and here we move directly into Roots for the EP’s finale. Again, the drums avoid a one drop with the kick on the down beats, snare on the ups and hi-hats on a winding arrangement. Keys work in the mid-range across a bubble rhythm with some nice embellishment at points. Meanwhile, the bass’s arrangement is perhaps the most complex of Colors. It hits the one directly on the first bar of each four – and then skips it for the remaining bars, but only for the length of a semiquaver. There’s a glorious electric organ which funks its way through the track and Paggi’s trumpet solo at the end is quite brilliant. Those synth pad drums return; there’s some nice use of additional synths and samples and the guitar line has been well engineered to make it sound almost otherworldly. Dub production values are again present, including some nice rhythmic reverb across the keys at points. But this is Tee’s show – and he delivers the track with aplomb. His attention to dynamic light and shade is precise; he shows a very good vocal range and his enunciation is pitch perfect. But his expressiveness and interpretation are almost that of a soul singer; lyrically it’s moving and thought-provoking – and its perhaps the strongest vocal performance, and therefore track, of the EP.

Overall, Colors EP is a strong release. It’s great to see a proper EP being released that’s not a riddim – and also one that features a selection of artists and musical styles. All the tracks are strong; musically its competent and inventive and Twan’s track is a particular stand out. A very good release that pleases in every respect.