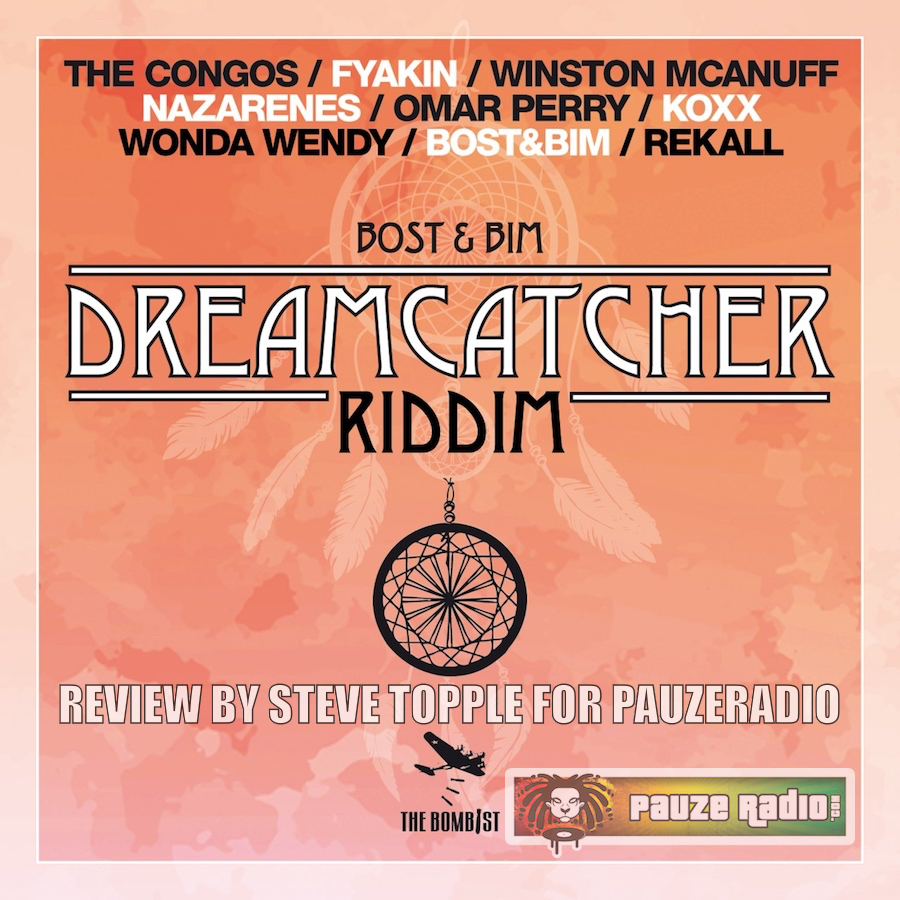 If you’ve ever woken suddenly in the middle of a dream, you’ll know that ‘otherworldly’ feeling when you’re not sure if you’re still awake or asleep. Well, the latest riddim from Bost & Bim musically encapsulates that experience perfectly. But the track and its interpretations are no nightmare.

Dreamcatcher Riddim, released via The Bombist, is a curiously enthralling creation. It sits somewhere between Roots and Dub, probably being at home in the Revival movement. But you get the feeling Bost & Bim took a little bit of inspiration from traditional Ambient Trance – if, of course, you’re old enough to remember what that was.

The basic riddim is a smart and extremely complex piece of composing. A synth organ is the centre piece, with the use of reverb and chorus effects heavy. The decay appears to be heightened, which when coupled with the other effects creates the first part of the otherworldly ‘dream’ feeling. Interestingly, the synth organ’s duty throughout is the skank as opposed to the usual bubble rhythm. The latter is kind-of picked up by a grimy, distorted bass, which comes in on the second beat and then just before the fourth of every bar. But it feels more RnB riffy than Roots-y. Even Manuel Faivre’s trumpet sounds slightly UFO-esque, as it visits unexpectedly from time to time.

The percussion is on a partial one drop, with the accent being just after the fourth beat. Meanwhile, strings whose tone is bent and warped repeat a melodic riff. There’s brilliant use of electric guitars, which flit in and out like an echo. The kHz has been turned right down, creating a rasping, tinny sound. Distantly, in the background, you sometimes hear that synth choir effect, which almost takes on the sound of a theremin.

It has to be said, Dreamcatcher Riddim stands up as an instrumental track in its own right. The composition and production are top quality. But it’s the arrangement which is exceptionally good. The use of rhythmic and melodic repetition, a staple of riddims, is equal to variation and syncopation. Not one eight bar phrase is the same, which gives a fascinating template for the artists involved to work from. And what a fascinating line up it is, combining some of the freshest talent around with legends of the Roots movement.

First up on interpretation duties is Fyakin, with In Prayer. His album New Wave was one of the most exciting releases of 2019. And he revisits some of that ingenuity on this track. The riddim itself is mixed up slightly, with more focus on the trumpet. The Song of Praise, hailing the stability Jah gives Fyakin in his life, uses multi-layered, Gospel and call and response backing vocals which are vocally impressive. As always, Fyakin’s expressive performance and lyrical content impress. His vocal sits in a top-end tenor and falsetto. Its phrasing is more fluid than Roots, leaning towards Neo Soul. It cements him as one of the most exciting Revival artists around.

Koxx brings the riddim to a deeper place with Better World. Being a bass player himself, that line is accented throughout, more than on the original cut. You can also hear the influence of the bass in Koxx’s vocal performance. He’s masterful with phrasing – moving between beamed, strung out syllables and tight, clipped ones. It makes his voice feel like a stringed instrument and forces home the potency of his lyrics. And my, are those lyrics potent. Koxx provides a rousing yet stark analysis of the state of the planet – from climate change, to poverty via war. Stirring stuff.

Next up is Omar Perry with Bring It Back. Mr Scratch’s son is in his father’s image. The track has been arranged in a far more Dub manner than the original cut, with extended breaks where either just the bass or percussion take the lead. Heavy on the singjay, lighter on the vocal, Omar takes the genre back to its roots with his authentic, beamed rhythmic flow and pointed syllable enunciation. Lee would be proud.

Rekall gives his take on Lonely. The standout on this is Rekall’s vocal. He does an impressive flip between singjay so laid back its almost rap, and a soaring, Soul-like tenor. Both these styles are also reflected in the melodic arrangement. Bost and Bim mash the original riddim up slightly, with variations on the pattern and some additional breaks. The combination of this arrangement with Rekall’s vocal accentuates the latter intuitively. Nicely done.

Dreamcatcher Riddim moves into pure Roots territory with The Congos’ Jah Is The Light. The legendary group show no sides of fading. It’s stirring to hear Cedric Myton’s falsetto vocal gliding over the riddim. Again, another Song of Praise and The Congo’s interpretation of their lyrics is gorgeous. You almost feel that they’re singing the words for the first time. This is because they have that almost improvised feel. The Congo’s have lost none of the power, as Jah Is The Light demonstrates so well.

More legends, and this time The Nazarenes give us their take with Protect Me. They always impress, with their clear combination of Roots and Soul, but also the nods to the Motherland, specifically Ethiopia. Protect Me is no different. The riddim has not been tinkered with too much. But it lends itself well to Mehdane and Noah’s vocals. Combining Soul sensibilities, like complex vocal runs, Doo-Wop and improvised riffs, with Roots mechanics like rhythmic beaming epitomises the brothers’ work.

On Rabbi Son, veteran Winston McAnuff goes full on Roots preacher. But his performance is more than that. It harks back to the true ‘roots’ of Roots: Mento music. It’s that nasal, head voice accompanied with a style of phrasing that effectively gives the impression of speaking but with a melody. Winston’s performance harks back to rural Jamaica, as he delivers proclamations about his faith. But it’s also fitting he’s on Dreamcatcher Riddim. Because given Mento was effectively where riddims first started, Rabbi Son seems an appropriate tribute

Ending Dreamcatcher Riddim is Wonda Wendy with Blackout. It’s probably the strongest of the interpretations, for various reasons. Wonda’s vocal style sits perfectly with the arrangement. It’s cool, it’s laid-back, it’s sensual. She covers a full range of timbres, from breathless, to rasping, to soaring. Wonda purposefully moves vocal between glossy Soul and growling singjay, dipping into an angelic RnB too. Her embellishment of vowels, turning ‘ah’ into ‘er’ then ‘orr’, just adds to the Soul vibe. All in all, Wonda’s dreamlike vocal captures the otherworldliness of Dreamcatcher Riddim completely. The descriptive but ambiguous poetry of her lyrics marries perfectly as well.

Dreamcatcher Riddim is a fascinating piece of work. The combination of recognisable Roots/Dub elements coupled with Ambient Trance inspiration makes for a potent piece of music. Bost & Bim and the artists have sculpted a surreally enticing vision of both real and metaphorical dreams. You won’t want to wake up until it’s over. Review by Steve Topple For Pauzeradio.com (25th January 2020)