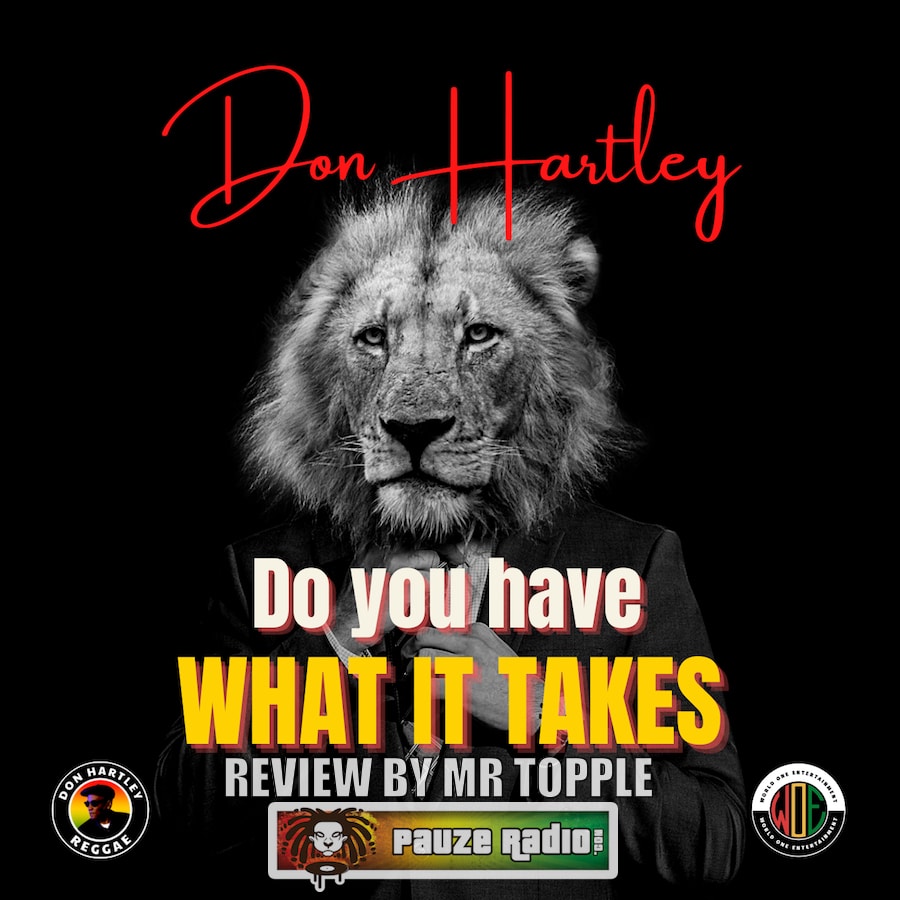 Don Hartley – Do You Have What It Takes – Review

Don Hartley Do You Have What It Takes Single Review by Mr Topple for Pauzeradio.com.

Don Hartley is back with another new track – this time asking us if we have ‘what it takes’, while showing us that him and his team certainly do.

Do You Have What It Takes, released via World One Entertainment, is a pleasing Roots track, listen here or watch the video below, which is authentically Old Skool while still feeling fresh. The composition, co-writing and co-production comes from Linval Allison, with production from Hartley himself and the instruments being in the capable hands of Pedro Queiroz. Mixing and mastering is seamlessly done by Mighty Drop, who has left the finished track with a keen quality and attention to detail. Caythorpe Studios’ artwork for the release finishes the package off well.

The track is classic Roots in its formation. Keys runs an incessant bubble rhythm, sitting in the mid-range of both clefs and fairly staccato in nature, but not so much so that they’re aggressive. Drums do a one drop-style arrangement, with the kick and snare focusing on the two and four, while hi-hats fill the spaces in between across dotted notation. There’s some nice engineering across the snare, too – making it shrill with decent reverb and on occasion added rhythmic syncopation, which helps move the track forward. Meanwhile, the bass avoids a traditional drop-beat rhythm, instead striking every beat. It runs around a melodic line instead of arpeggio chords seen in older Roots. It’s fairly picked with a rich and rounded timbre, adding depth and momentum.

Do You Have… also has a gorgeous horn line. It performs a mixture of responses to Hartley’s main call as well as its own countermelody. But its use is well-placed, not being overly leaned-upon – so when it does come in, especially on the chorus, its presence is prominent. Then, an electric organ also gets involved, with pleasing vibrato and a selection of chords at the end of certain bars; longer, semibreve-led ones at other points as well as its own melodic line. An electric guitar pops in and out on occasion, sounding somewhat wah-wah’d with a riff and a run every so often. Additional percussion, including a vibraslap, blocks and some pattering bongos elevate the track; the bridges with their soulful chord progressions are pleasing – and overall, the composition and arrangement are top-quality.

Hartley then adds to all this with his performance. Here, he works around the mid-range of his register, slipping down into a baritone at points and then moving up to a mid-tenor with occasional flips into a falsetto. His timbre is rich and rounded throughout, but with occasional use of the horizontal embouchure for added effect. He’s created a pleasing melodic line, especially across the chorus and provides pleasing rhythmic variation throughout. Overall, his performance is well-controlled – peaking and troughing in terms of dynamics and note extension and clipping. Lyrically, he’s created a compelling narrative about the nature of humanity and how, anthropologically, what we experience today in terms of Babylon’s suppression and our struggle for emancipation is actually not new. Hartley gives a rousing rallying-cry for people to stand up and fight-back against the system, and it’s engaging and compelling.

Overall, Do You Have What It Takes is a strong offering from Hartley and all involved. Musically pleasing, it provides enough detail to stand-out in modern Roots, while Hartley is on good form and demands attention. Great works all round. View more from Don Hartley on his YouTube channel here.

Don Hartley Do You Have What It Takes Review by Mr Topple / Pauzeradio PR Services (29th August 2022).