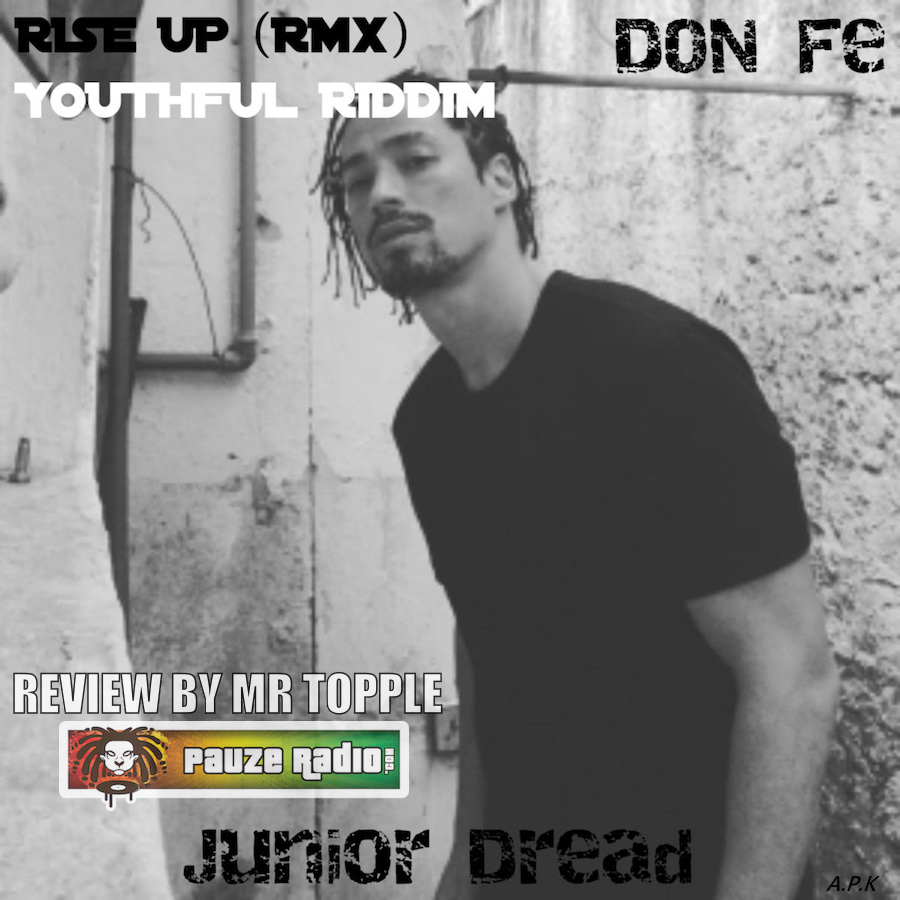 Don Fe is a talented soul; not least in terms of his ability to turn his hand to many instruments. But he’s also an expert composer, as one of his recent works shows.

Youthful Riddim, release via Jah Catalyst Records, is an intriguing and intricate mix of genres. Overly Roots and Dub, it has inflections of other styles brought in. The production is first rate, as expected. It has an unsettling quality, focusing firstly on the bass but cleverly also putting the higher pitched instruments to the fore as well. This marries with the basic riddim perfectly.

Fe has created something beautifully complex; showcasing his classical training in flute, piano and music theory well; not least the eery A minor key. There are some staple Roots musical devices present: the stark opening with the high-passed, tinny keys running a reverbed bubble rhythm being once such example. These then continue throughout the arrangement – pausing at times to create some Dub-heavy breaks, and at others having the reverb running between inputs along with some spooky pitch modulation sweeping across them.

Speaking of Dub, and the booming, resonant bassline is straight out of the genre. Avoiding a usual one drop pattern, it opts for a varied, melodic affair – alternating between syncopated phrases and elongated semibreves. It’s way down its register and creates an ominous, brooding vibe. Back to Roots, and Fe has employed a heavily distorted electric guitar line to mimic the bass’s motif across much of the track. But then, other elements come into play.

The drum arrangement is fascinating. It’s a hybrid of both Roots and Dancehall. The latter is represented across the kick, which does that synonymous clave rhythm (‘oneeeeee-twooo-and) across the first two beats of each bar, before kicking again on the three. The snare focuses more on Roots, hitting the two and four while the hi-hats running dotted and syncopated notation in the breathing spaces. It’s an inspired move, as it moves Youthful Riddim away from straight Roots, creating an unsettling drive that has more momentum than if a straight one drop drum arrangement had been employed. It almost, but not quite, feels like it could shift into Hip Hop at any point. Then, Fe has brought in additional instrumentation which is also delightful – putting you in mind of something almost Synthwave.

A rasping, distorted horn runs a straight riff, consisting of semiquavers that start just before the third beat and across one note. There’s also a second (what sounds like) horn line, which is slightly raspier but has been compressed to give an ‘other room’ feel to it. It runs a separate melody altogether, just out of earshot. As Youthful Riddim progresses, Fe brings in more instrumentation across a sudden swell two-thirds of the way through: synth strings running harmonised, rhythmically fluid melodies; what sounds like a synth theremin glides around and additional keyboard joins the fray, too. This goes, and then comes back again. It represents a smart crescendo in the arrangement, before everything suddenly fades away – leaving just the keys echoing off into the distance as the riddim ends. Overall, Youthful Riddim is pure class from Fe – detailed and intricate, what it also shows is that he has created it with artist’s interpretations in mind due to the ebb and flow of the layers of instrumentation.

First, Junior Dread comes on board for Rise Up. He’s honed in on the unsettling vibe perfectly – giving a performance that’s unrelenting, forthright and pointed. Vocally, he works around the upper-end of his register, avoiding a straight singjay (kind-of) but still keeping the melodic arrangement of the verses fairly straightforward to focus on the lyrics. But on the choruses, he’s created an attractive melody. There’s a nice improv bridge just before the halfway point of the track. Then, Dread allows Fe’s instrumental crescendo two-thirds of the way through to speak for itself, before he returns – showing the generosity in his performance. Lyrically, Dread has created a narrative which, again, fits with the music perfectly – as he delivers a spiritual call to arms against the system’s noxious agenda and that of its proponents: “Babylon a try but it’s not my friend; everything I need Jah-Jah give me strength”. It’s stirring stuff – showing what can happen when an artist tunes perfectly in to a composer’s musical vision.

Then, Fe gives us his personal interpretation across Haunted Ghetto; an apt title which perfectly fits the arrangement. Here, Fe has taken the basic structure but embellished somewhat: note the rasping strings enter earlier on in the track, for example. But the centrepiece is Fe’s melodica solo. There’s an art to delivering a rousing performance across the instrument; Augustus Pablo knew what to do – and here, so does Fe. First, and the melodic arrangement is rich and detailed – running up and down the mid to upper register of the instrument, increasing in pitch as the track progresses. His focus rhythmically is on dotted notation, across quavers, semiquavers and at points even running into straight demisemiquavers – showing his skill with the instrument. But it’s Fe’s expressiveness which really stands out. He uses peaking and troughing crescendo and decrescendo like a vocalist would, bring an almost human quality to the melodica’s timbre. He flips between staccato and legato notes with ease; at times applies his flautist’s flutter tonguing technique to create rapid fire riffs across semitones and also does some clever near-glissandos; no mean feat on the melodica. This makes Haunted Ghetto glorious and shows Fe’s technical skill on the melodica perfectly.

The Dub Youth version is also a smart piece of work. Some of the original riddim’s elements have been stripped back, like the keys’ bubble rhythm whose appearance on the intro has vanished. Instead, additional instrumentation has been brought in: note the bongos, pattering away at points; additional cymbal crashes are included; Dub Youth also has increased levels of rhythmic reverb across some of its lines and watch out for the screaming electric guitar at one point. Fe has, in effect, increased the haunting feeling of the original in this Dub version – and it works well.

Overall, Youthful Riddim is sterling work from Fe. It’s detailed and expertly executed – taking a theme and musically running away with it. The additional versions are very strong, and overall – it’s potent and pertinent work. Now, it would be nice to hear some more artists put their interpretations across it.