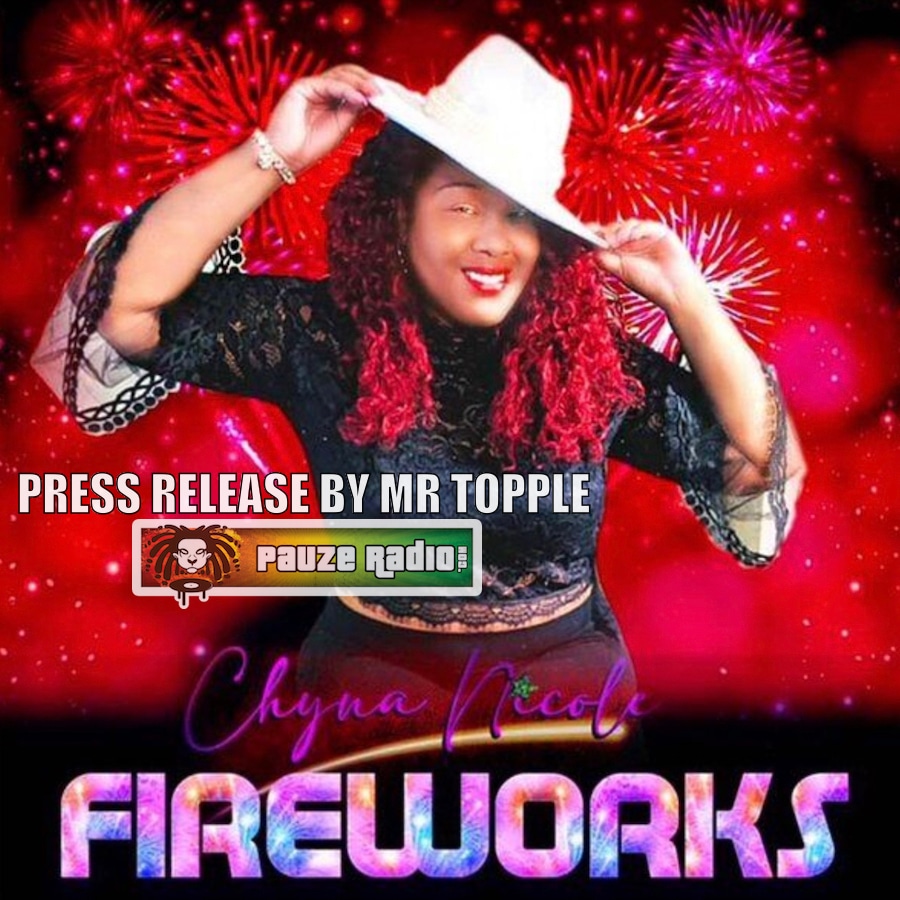 Press Release: Chyna Nicole ushers in fall with a bang across her new single ‘Fireworks’ by Mr Topple for Pauzeradio.com.

Singing sensation Chyna Nicole has had a busy year. From the inspired reimagining of the Celine Dion standard My Heart Will Go On, to her contribution to Jumpout Production’s Rockin Rock Riddim, she refuses to slow down. And her latest release shows this versatile artist once again breaking ground.

Fireworks is set to be released via Nico Star Music on 2 September. The track’s core elements are based on The Cables’ 1968 classic What Kind Of World – produced by the legendary Clement “Coxsone” Dodd and released via Studio One. Production comes from the renowned Paul “Computer Paul” Henton, which has guaranteed inventiveness and quality.

“Well, Chyna Nicole is back to what she does so well: these Lover’s Rock-style tracks but with the kind of unique arrangement and delivery that only her and her team can do. Fireworks is instantly memorable while varied enough to sustain multiple plays. Nicole herself is compelling and delivers some quality vocal gymnastics – and overall, Fireworks should set her fans and the airwaves alight this autumn” – Mr Topple for Pauzeradio

The track is undoubtedly grounded in Lover’s Rock: the classic bubble rhythm on the keys; a skanking guitar; the bass on a drop-beat rhythm and some drums running a one drop. But then Henton has brought in additional elements like a soulful vibrating organ, shrill synth horns and attractive complex chord progressions. Couple that with Nicole’s melodic line, which sits between Lover’s Rock (with the use of dotted notation) and RnB (with the runs and infectious chorus) – and you’ve got another interesting track from Nico Star Music.

Nicole consistently aims for diversity in her music. She said:

“Many fans have asked for Lovers Rock. I get inboxes saying ‘when am I going to do a love song…?’

Most of my recent music has been about justice – “Let it be for Justice”; has been uplifting and motivating – “Top Pedigree on the Grind”, “Supernatural”, or just venting on the naysayers – “Blaze it High” and “Do it my Way”.

It’s been a while! But I began with love songs, like “Love Me Tenderly” in 1994 and a resurgence of “Take Me to the Moon” which many say is my signature. So, to give my growing fans that vibe, I recorded “Fireworks”. As well, listen to “Twilight” (2013) and “Hardcore Love” (2013) which features Chuck Turner: my fans in Europe love this vibe. So, it’s a treat”.

And a treat Fireworks is. Nicole once again shows her aplomb for music that blurs the lines between Reggae and RnB. Here, she delivers a controlled performance – swerving between breathy anticipation and full-on passion. The mix of Lover’s Rock and RnB influences make her performance engaging and interesting.

It’s quite a personal track for Nicole:

“All of my songs draw from either my own experiences, a romantic movie or friends experiences. But this one is dedicated to someone special in my life who “put the cape on and his move was massive” as the lyrics say. FIREWORKS!”

Once again, Chyna Nicole and Nico Star Music have delivered the Lover’s Rock goods with a twist. Fireworks is a must-have for any early-fall playlist.