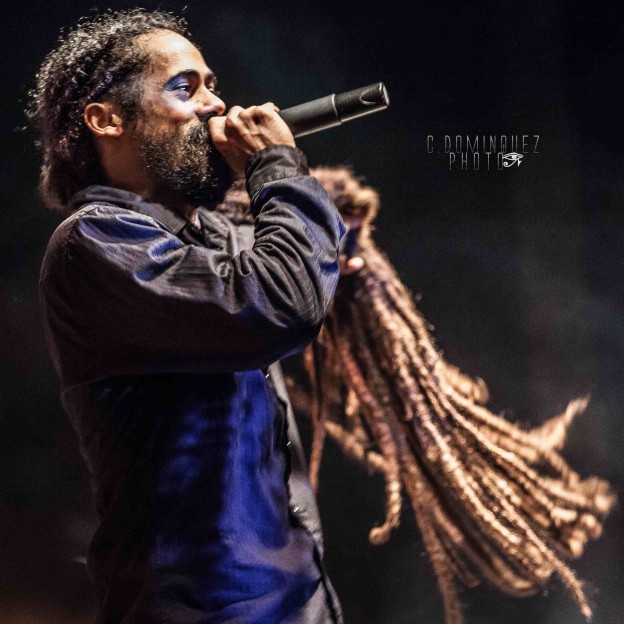 Catch A Fire Tour 2015. Let me start by saying the name of the tour does no justice when it comes down to describing the amount of FYAH! brought to the stage. The Catch a Fire Tour kicked off in Philadelphia, Pennsylvania on August 29th and made it’s 8th stop at the Crossroads KC in Kansas City, Missouri on September 11th. I might add that September 11th is an all around monumental day. For starters it’s the day Ethiopia celebrates their New Year a day that is also celebrated by those of the Rastafari. Also, on the same day we bring forth remembrance of the passing of the late and great legendary Stepping Razor Mr. Peter Tosh! Does “Legalize it” ring a bell?

As the venue filled with eager fans and supporters, you could just feel the energy and unity vibing thru the place. First up to bless the stage was the ever so talented Tarrus Riley backed by the legendary Dean “Cannon” Fraser and The Blak Soil Band. For those who don’t know Tarrus is the son of the great musician Jimmy Riley, so as you can imagine music is in his veins.

As Tarrus took the stage he performed hit songs like “She’s Royal” and “Superman.” As well as blessing us with songs from his latest album Love Situation. As he went on we heard sweet sounds from the legendary and award winning Saxophonist and producer Dean “Cannon” Fraser, as well as Glenn Browne on bass, Mitchum Chin on guitar, Oral Brown the amazing “drummy” on the drums and both Chris Smith and Crick “Koriq” Clarke on keys and vocals. Nearing the end of we got to hear a very new very unique collaboration, Major Lazer’s “Powerful” featuring Tarrus Riley and Ellie Goulding. Tarrus’s music sends that exact message that love is powerful, love is the most high. 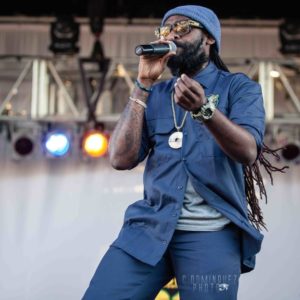 Next up was the Royal Family of Reggae, Morgan Heritage! Opening up with explosive vocals from Peetah Morgan, immediately the crowd’s response was massive. Gracing us with originals like “Don’t haffi Dread” and “Tell me How Come” Morgan Heritage was filling the venue with an immense amount of passionate energy. Now the name Morgan Heritage describes exactly what they are, a family about heritage, generation and togetherness. With that being said Peetah took a moment to express the importance of family and uplifting the next generation as he introduced his nephew upcoming artist Jemere Morgan, son of Gramps Morgan.

As to be expected Jemere’s vocals were nothing short of amazing. Also on stage was the wonderful Gramps Morgan on keys and vocals, Luke Morgan on guitar and Mojo Morgan on percussion and vocals. We were blessed to hear songs from their latest album “Strictly Roots” taking us back to the roots and paying homage to those who’ve paved the way, take note when I say you must check it out!

On the tour as well was the very energetic Sky High The Mau Mau, “Rasta Man Passing By” a very talented and underrated veteran of reggae. In between sets, he livened up the place with his spirit and charisma and gave the final acts well deserved introductions. Next up to the stage was Black am I, a fairly new addition to the Marley’s Ghetto Youths International Label. Black am I has a powerful voice with a powerful roots message to match. He delivered us his single “Samson Strength” putting a contemporary twist on classic roots.

As we continued thru this epic musical journey, the crowd was anxiously anticipating The Marley Family. First up! Jo Mersa Marley, son of Stephen Marley, who’s been on stage with his father since the 90’s. Jo Mersa is a lyrical deejay who brings forth a dancehall style with Hip-Hop influences. He showcased this, while performing “Rock and Swing” off his EP “Comfortable.” Now it would only be right to have Stephen “Ragga” Marley up next! Soothing the crowd with his soft vocal melodies and the pure sounds of his guitar, he gave us of his originals including “No Cigarette Smoking (In my Room)” and “Break Us Apart” Ragga went on to memorise us with tunes from his father, the late Robert (Bob) Nesta Marley. The crowd was in sync, singing along word for word the lyrics to “Pale Moonlight.” We were blessed to view amazing video projection on the stage as well, sealing the message “Long live Bob Marley.” Stephen went on to call Skip Marley, son of Cedella Marley to the stage. Skip Marley, is an upcoming singer of the Marley family, he brought to us his debut single “Cry to Me” which was beautifully sung. His voice is distinctly natural and I can say he effortlessly sounds like his late grandfather Bob Marley. 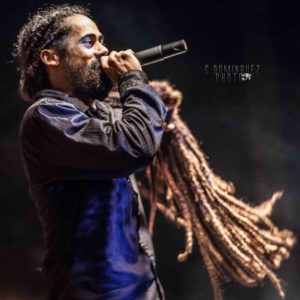 Forwarding on, Sky High graced the stage again to introduce Damian “Jr Gong, Gonzilla” Marley! Off the bat, Jr Gong exploded with energy as he performed “Welcome to Jamrock,” jumping as if there were springs on his shoes. As the music got louder, he jumped higher! Gongzilla too gave us songs from his late father Bob Marley, a true honour to have witnessed. As he went on, Jr Gong calmed the crowd as he delivered, in my opinion, two of his most powerful songs. “Road to Zion” and “Patience” off of the collaborative album with Hip-Hop veteran Nas “Distant Relatives.” The song “Patience” was delivered in a way I just can not describe, souls were touched, eyes glistening with tears, each note played and sung to perfection. All while the sacred the colours of red, gold and green are in the background as Judah the Flag man waves the Rasta flag with honour.

Nearing the end of the show, Stephen Marley graced the stage again along side his brother Jr Gong, giving us their original hit song “ The Traffic Jam” as well as more songs from their father. Closing the show, Morgan Heritage, Black am I, Jo Mersa and Skip Marley were called back on stage to perform a tribute of Bob Marley’s “Could you Be Loved” along side Gongzilla and Stephen. The amount of love and rasta livity in the place was just amazing. As the stage cleared, Jr Gong was called back for a final encore. With the crowed chanting “Jamrock” he gave us a “likkle” more. With his final departure, the stage cleared leaving the Rasta flag waving in the breeze with pride, lion pride.

I give thanks to the most high, for being blessed with the opportunity to capture this monumental event, it was more than I could have imagined. Jah bless!