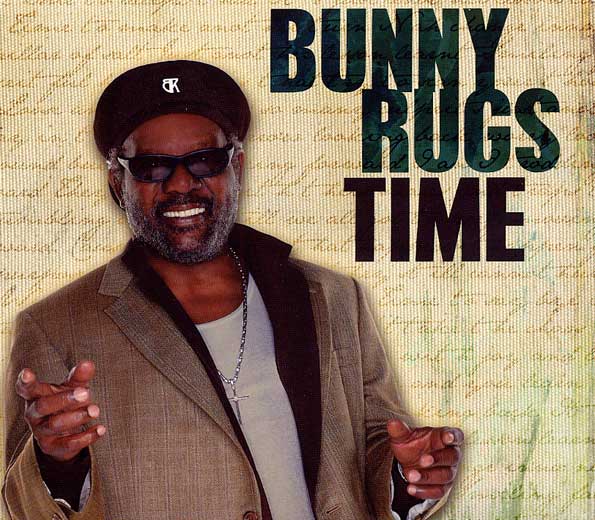 You may have heard Bunny Rugs as the lead singer of the Reggae Ambassadors “Third World Band”, as his vocals have been and are a vital component to the band. Born William Clark in Mandeville, Jamaica on February 6th, he moved and was raised in downtown Kingston. His grandmother gave him the nickname “Bunny” as he liked to “Jump around like a damn rabbit” she said. Singing from a young age and now with many hit songs with bands and also as a solo artist, blessing Reggae fans all over the world for decades. It’s interesting to know that for two years Bunny Rugs was the lead singer of “Inner Circle” before Jacob Miller. With that and the works with Third World Band, which alone is resume for a great musical career and history, make him clearly a veteran artist contributing to the progression of great Reggae music. Rugs has 3 previously released solo albums: “To Love Somebody” a Lee Scratch Perry Production, “What A World” and “I’m Sure”. This latest brand new release “Time” really is a work of art. The rich, clear, velvet sounds giving messages of life experience from Bunny Rugs are captured very well.

Excited after witnessing him in the Pauzeradio studio singing live, I started listening to this brand new Bunny Rugs “Time” album with track one, the very powerful “Just Cant Deny”. This is a great example of the quality of music on this album, Bunny starts as he means to go on. Not only does this song have solid, well thought out lyrics but it is also very well produced. It’s vocals are sweet, flowing and well matched to the upbeat live Reggae riddim. Uplifted by the first track I moved onto “Heaven Sent, Dat Feeling”. Right away hearing a convicted, heart felt vocal performance. This is a very strong, penetrating love song with a musical, lovers style riddim that simply flows like water. “You’re My Everything” still keeping us rolling on the Reggae lovers style riddim but slightly softer with an enticing musical side. The warm vocals again are sung from the heart with serious conviction drawing our ears in to listen.

“Neva Gonna Give Up” is staying on the softer sounding riddims, as like the whole of this album, it has a very musical feel with a spanning vocal range. This opens us up to the real roots sounds of Bunny Rugs. Catchy hooks with positive uplifting vocal content a sure fire hit song. “Kurfew” brings to us an important message of events from 2010 that took place in Jamaica, when Curfew was implemented in the streets, while the armed forces where looking for drug baron Christopher “Dudus” Coke, innocently killing people. Driving home this message to us the listener, the riddim is laid back but at the same time has an element of suspense to it. Keeping to the musical theme of this album and really setting the mood for the lyrical content to stick in our head. Reinforcing this as another hit song from this album.

“Its Time” has to be possibly my favourite from this album “Time”. Even though this song has some auto-tune in places, I am not keen on auto-tune, but this seems to have just the right balance, the effects add to the power overall. The vocal content and deliverance is just adding to reassuring us that it’s ok to move forward and learn from the lessons in life that we have faced, do face and get through. The vocals fit perfectly to the bouncy riddim that glides us through this big tune. Every time I play this song I am unable to resist, I have to keep pressing repeat! The power not just in the vocals but also the vocal content are sure to uplift anyone that listens. Moving on to the next track with “We’ve Got The Formula”. Bunny Rugs takes down the pace and switches back on to the love theme that is strong in this album. It starts with a very slow introduction that builds up into a we constructed track. This combined with beautiful harmonies complete the build up in this song to give across, in a powerful style, its message of true love. “Settling Down” gives us a classic old skool style riddim with consist vocals. Not my favourite song from the album as I thought the riddim track to be a little quiet, not too noticeable but it did stand out to me. I still think this album “Time” does ooze pure quality not just in lyrical content but in production values too.

The next song “Solutions” has a cool, mellow introduction, soothing to the ear and musically clever. This album echoes real music all the way through and it’s really no different in this song. This steady, mysterious, musical work of art will bring a feeling of tears to your eyes, as it has so much heart in the vocal performance making you feel the struggle in the story. Accompanied by a very tight riddim which has an instrumental section at 2:35min that pulls you in and makes the hairs on your arms stand rigidly up, feeling word for word the lyrics in unison with the beat. As we proceed “Thinking Bout You” steps up the pace a little with a very unique and different sounding vocal recording. Even with it sounding different it does not change the flavour of this album. Tight production, maybe could have done with a little clearer vocals but they are not unlistenable, word for word we can hear and absorb the message. As with each song I have listened to so far on this release the riddim choice is spot on point, which i feel can make or break an albums overall quality.

“Love Is Blind” this hit love song on the Tune In riddim was digitally released in 2011 and has been a regular feature for the Unique Reggae Mix Show for many years. It is also how I got introduced to Bunny Rugs’s music in 2007, as a solo artist and not singing with the Third World Band. Simply a massive tune this is, which gets a very positive response on the radio and in the dance. Smooth silky vocals that flow rhythmically in hand with the riddim track covering the message of love being blind, a must listen to “hit song” and a must play for any radio selecta. “What Kinda Man” is another love song, balancing this album with roots and lovers perfectly. I thought that this is well placed on the album. A laid back riddim allows us to hear a great vocal range attained by Bunny Rugs accompanied by warm female harmonies and backing, this song is a journey of love and again you can feel it comes directly from the hearts experience.

Hit after hit being described here and I am sure you will agree that “Bed Of Roses” keeps the album moving forwards. This one goes out to all of those that are working towards a dream, ambition or goal. This song will give everyone that listens strength. Bunny’s lyrics are not just driving but also very true, right down to the last word. The progressive roots riddim again has a short instrumental solo which gives this song even more heart and soul, giving us a chance to reflect on the powerful vocal content and deliverance. Good to hear an artist working with real instruments and not computer generated instruments. “Don’t Give Up” holds the pace of this journey at a good level. This song drops right in with it’s uplifting message, the title describes what the message is all about. Very very catchy hooks and chorus. The riddim track suits the vocals, intriguing and well produced. A real fresh sound for your ear, positive message, all driven by the best theme any album could have which is to be “Musical with a message”.

Onto the final song rounding up Bunny Rugs’s “Time” album we are given the beautiful “Land We Love – Jamaica”. What a song to round up the album with. This song from the first note captures the true sunshine of Jamaica in music. Deep vocals a little quiet maybe, I thought they could have been a fraction louder to sit on the riddim and not in the riddim. Still with that aside it’s a very good song. Warming vocals with a good musical range in vocals and instruments as mirrored throughout the whole of this album.

My top 5 songs from this album are:

Summarising this album is quite straight forward. You can hear that time has been taken in making this quality album, not just in the production but also in the vocal content and deliverance. I Love hearing real live instruments in albums and this brings us a great balance of vocals and instruments presenting us with messages from the heart and soul with feeling. To all Third World Band fans and to those of you that have not heard of the Third World Band, you all will really feel this album. A good combination of Reggae Lovers and Roots make for a good journey, track placement on the cd is perfect. One thing though, this cd is not a hard plastic case but a hard card case, it comes sealed but would have been better to see it in a hard plastic case, to keep in line with the extremely good quality of the music on it. 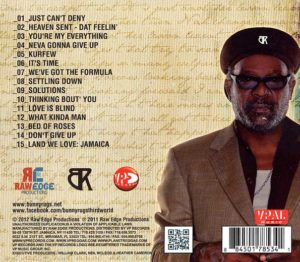