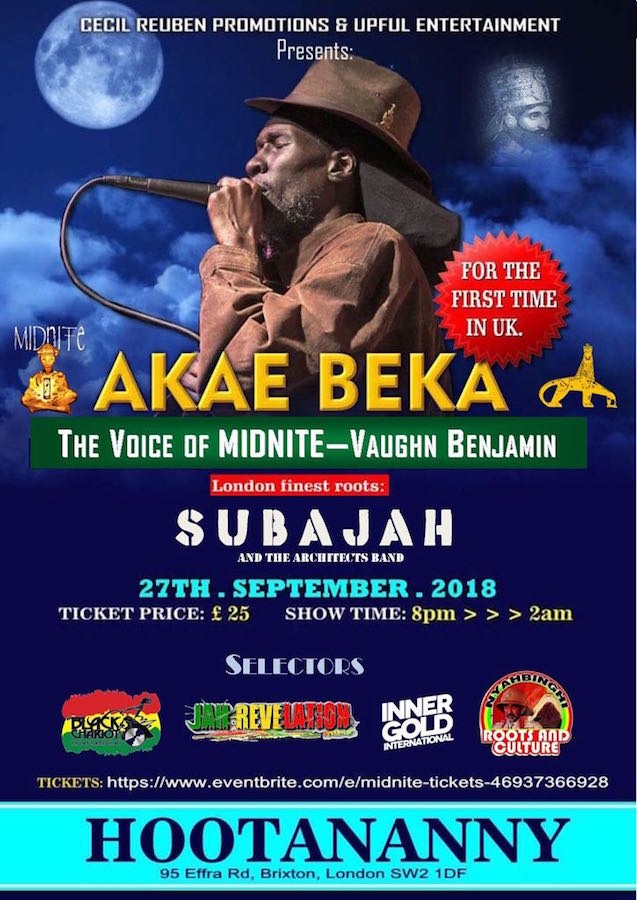 #1 Roots band out of St Croix US Virgin Islands

Midnite / Akae beka is no ordinary reggae band they are a movement phenomenon. True testimony of transmitting a higher frequency.

A night of real Iritical mystical roots experience to behold.

One of life’s chief lessons is the consistency of change. The Earth, once conceived flat, is now thought to be round. The Book of Enoch, Noah’s great-grandfather, was obscured for generations until three copies were brought out of Ethiopia by a prominent European explorer. Events like these have triggered paradigm shifts in the evolution of human thinking, yet the same principle applies to individual growth as well.

Akae Beka is the current manifestation of an evolving consciousness. Following a quarter of a century as lead singer and co-founder for the legendary, St. Croix-based band, Midnite, Vaughn Benjamin was inspired to intensify his light when life situations led him to revisit the Book of Enoch. He then realised his preparedness to answer the calling of a sacred oath described therein, the Akae, the Beka, one and the same. Much like the archangel, Michael, who was responsible for the truths pertaining to the secrets of creation, so does Benjamin today accept his role in a parallel time of rampant deception and broken taboos in the arenas of world leadership. Always rooted firmly in the teachings of His Imperial Majesty, Emperor Haile Selassie I, his personal evolution and reaffirmed purpose is manifested in his newly declared name.

Don’t miss out on Akae Beka first ever UK performance, get your tickets now to avoid any disappointment.